Twitter ‘App Graph’ collects data about other apps you have

Twitter, the app, will soon starting looking around your home screen to see which other apps are there. In a blog post, the microblogging platform is announcing App Graph, which is just their way of finding out which apps you have on your phone. Twitter won’t be looking at your messages, or checking on your activity; they just want to know what apps you have on your phone. The reason, admits Twitter, is advertising. The more data they have, the better their ad network becomes.

As App Graph learns about what apps you have, it’s fed into Twitter’s knowledge graph as it relates to ads. Those ads can also be targeted, so someone not interested in sports won’t see a coupon for hot wings at the sports bar pop up in their Twitter timeline. 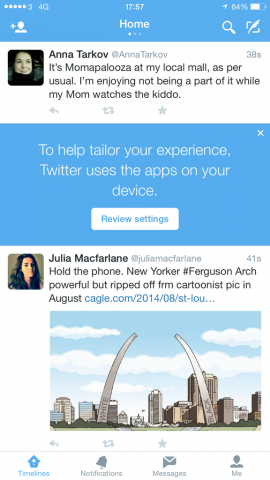 As pointed out via Re/Code, this information grabbing isn’t new. Developers on both iOS and Android have the ability to see what apps you have (or have in use) one way or another. App Graph automates the process, though. Rather than manually calling to the device, Twitter just sends the info along.

App Graph is opt-out, meaning it’s set to send Twitter info by default. Via their support page dedicated to the App Graph, Twitter gives very clear instructions on how to get yourself out of sharing info, so if you’re a bit wary of Twitter seeing which apps you have — a step-by-step guide is there.