Battery packs are ubiquitous now, with just about everyone offering up their take on how to charge your phone in a pinch. A new entry into the market, TravelCard, battles your draining smartphone battery at the pinnacle of the battery backup wars: the credit-card sized power pack genre. Could such a svelte packet actually power up your smartphone? We go hands-on to find out.

Okay, so, the TravelCard is about the size of a credit card face-on, but roughly 6 cards thick. It’s not quite the ‘credit card charger’ it’s held out to be. Still, for being so svelte, it packs quite a punch. TravelCard also has the charging input, changing cable, and either micro USB or Lightning cable built right in. For something as thick as a few credit cards, that’s pretty impressive.

At 1500mAh, it may not take you from empty to full, unless you have an iPhone. In testing it on several Android handsets, TravelCard gave up its juice to the phone quickly, and ran itself down faster than expected. It took about 30 minutes on average to get that 1500mAh of juice transferred, which was a pleasant surprise. 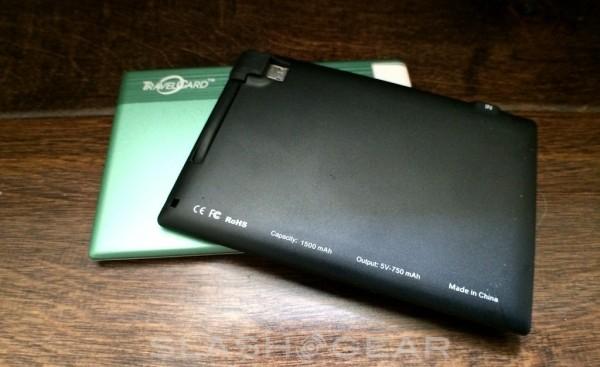 TravelCard touts their battery pack as one you could slip into a wallet. I’d argue that to be true for quite a few of you reading this. As for me, I use a very slim wallet — one that’s actually slimmer than the TravelCard, typically — so that’s not true for me. Still, if you were telling me I could power my iPhone to nearly 100% from dead and gone just by carrying something around the size of my wallet, I’d be all over it. Wallet-friendly or not, TravelCard is worth dropping in a pocket or bag.

Made of some very slim aluminum, TravelCard feels quite solid, but would likely bend if coerced. If you’ve never busted a battery open, don’t start here. It’s messy, toxic, and just plain ugly. TravelCard may not be one for your toolbox, or anywhere else it could be damaged easily. 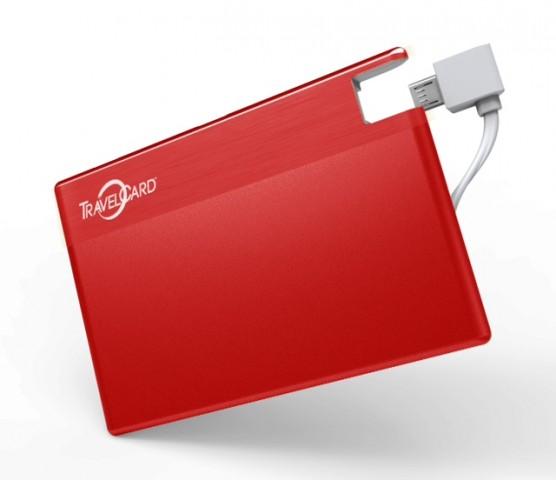 TravelCard comes with a small charging cable, too, which is necessary for iPhone users. The TravelCard charging input is the typical micro USB variety. If you’re the all-iOS type, you might not have one of those lying around. TravelCard can use any smartphone charger or USB output on your computer, and comes back to life in about 30-40 minutes.

For a day trip, TravelCard is one we could highly recommend. The slim profile lets it go just about anywhere, and it’s fantastic for packing light. You might make a compromise in overall battery size, but the ability to slip it in a wallet or those small pockets in your backpack you’re not using make TravelCard something to consider.