NASCAR fans who tuned in early to Saturday night’s race at Richmond International Raceway saw a vehicle of a completely different type leading the pack of 43 racers around the track. It was the NASCAR Sprint Cup series’ Toyota Owners 400, and a 2016 Toyota Mirai sedan became the first hydrogen fuel-cell vehicle to serve as a pace car for an event by the racing body. This was another NASCAR first for Toyota, as in 2009 the first hybrid vehicle to act as a pace car was a Camry Hybrid.

Apparently pace cars need to undergo testing by NASCAR, as Toyota says the 2016 Mirai had to be checked to meet certain requirements. It wasn’t revealed what NASCAR’s requirements are, but they can’t be too stringent for a car that only needs to drive slowly for one lap around a track. Either way, the Mirai was approved for pace car duties the day before the race. 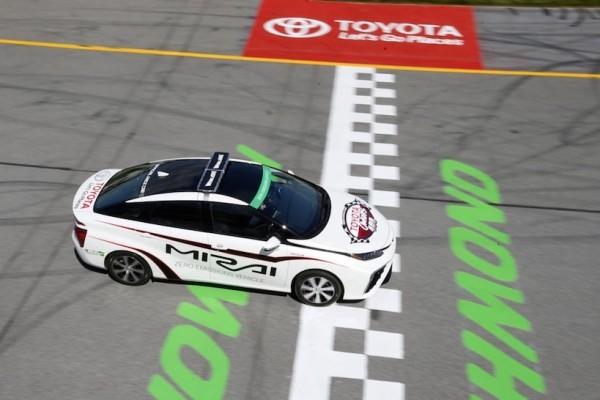 As a hydrogen-powered car, the Mirai has as close to nothing in common with the loud V-8 racecars of NASCAR as possible. Gasoline-powered performance vehicles and a quiet, eco-friendly car are not a match made in heaven. But as a Toyota-sponsored event, it was an opportunity for marketing gold.

Due to hit the market later this year, the 2016 Mirai will be one of the US’s first commercially available fuel-cell cars. And with the technology behind a hydrogen-powered car being so new, the Mirai won’t be cheap, starting at $57,500 before any subsidies or initiatives are applied. Toyota knows they won’t be selling a lot of these vehicles in the first year, but introducing the vehicle to car buyers early can spur an interest that may lead to purchases a few years down the road.