One of the most important questions of either of the iterations of the Rekall story was asked of actress Jessica Biel during our visit to the Total Recall 2012 press junket. That question was on what preparations she did for a character that may very well have not actually been real to anyone but Douglas Quaid, (not to be confused with Dennis Quaid,) a fellow whose own struggles with the reality of his situation is the basis for the whole plot of the film. Biel let it be known that not only did she have many discussions with the director Len Wiseman on what stance she was to take in her role, but whether or not she was real in the first place.

[Jessica Biel] If I would be playing a figment of someone’s imagination – for sure, 100% – I would still have prepared for that figment of imagination in the exact same way that I would prepare for somebody who was absolutely real. From a creative standpoint that wasn’t different – but the conversations that Len, Colin, and I had, on a daily basis, about ‘what is real, who are you, what do you remember? What do you trust? Do I even trust you?’ 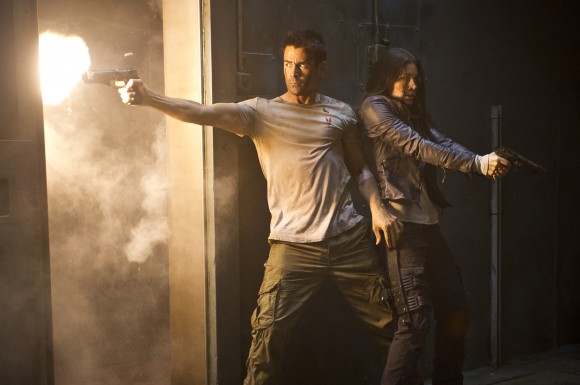 [JB] The thing that I asked Len all the time was, ‘how do I trust this guy? Yeah, I know how he trusts me, but how do I trust him?’ He was constantly talking me through that. Because I think that’s just as hard for her to accept as it is for Colin’s character – to accept this random person showing up in his life.

It was hard, it was hard to – sort of – walk that line of ‘are we confusing everybody? We’re confused.’ We were confused constantly – *laughs* – about what the hell, we were doing. And luckily Len figured it out. Thank god he figured it out and it’s not confusing anyone else even now. 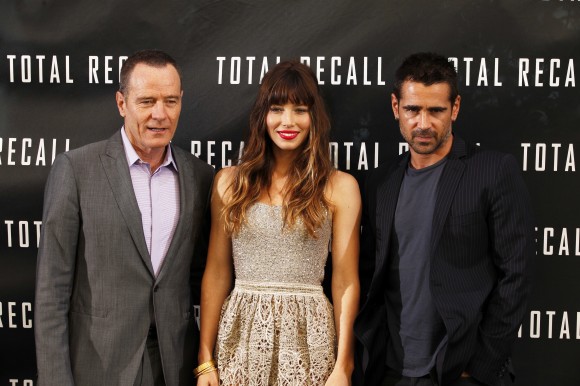 Above: Jessica Biel poses with Bryan Cranston and Colin Farrell at the Los Angeles press junket where the interview series here on SlashGear originates

NOTE: SlashGear readers – if you’ve seen the 2012 version of Total Recall and ended up being “constantly confused” throughout, let us know! We’ve been hearing quite a few mixed reports on the subject. Does this mean that the film did it’s job just as the 1990 version did?

Also have a peek at the rest of our ever-growing collection of interview bits and pieces we collected last month before the premiere of Total Recall 2012 – out in theaters now! You can check out the Rekall portal or head to the timeline below to get our full review of the film, interview moments with each of the stars and the director Len Wiseman as well – and stick around after you’ve seen the movie too – we’ve got insights and secrets galore!