The way of the tablet has been a rocky road, but it looks like all of that is beginning to change. Sure, Apple’s anticipated launch into the tablet market is helping to stroke the flames, but as long as it keeps promoting other companies to create things like Toshiba’s JounE, let’s just call it a win-win for everybody.

The JounE Touch is being treated as a Mobile Internet Device (MID) on the high-end side of the spectrum, with a heavy emphasis on video playback. The Touch can actually play reduced-quality High-Definition videos right on the screen, which is an 800×480 display, or full-resolution HD through the HDMI output. There’s WiFi on the device (obviously), and it looks like web browsing is actually put in second place, after watching streaming videos from YouTube or the movie service Acetrax. 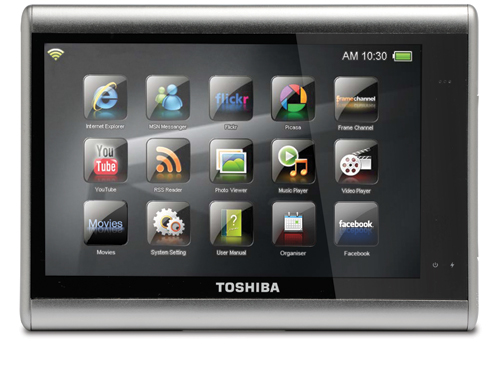 There’s also streamlined access to Picasa and Flickr to view pictures on the device, and a Windows Live Messenger application that allows users to chat via text or voice. An RSS reader and a Facebook application are also preloaded on the JounE right out of the box. The JournE is based on the Windows CE Operating System (OS), and has 1GB of internal storage for listening to music. The MID also includes an SDHC slot, for expanding the memory that you’ll definitely need. Battery life is pretty minimal: 7 hours for music playback, and only 2 hours if you’re constantly browsing the internet. Toshiba is planning to launch the JournE in the Fall, but there isn’t any word on pricing as of yet.