Let’s face it, 1080p is old news. Need glasses for your 3D content? That’s so 2011. Toshiba showed off the ZL2 TV back in September, which had two attractive features under its belt. First, you don’t need glasses to enjoy the 3D image it can pump out; and second, it has a resoultion very close to 4K, what Toshiba are calling “Quad HD”, 3840 x 2160.

Toshiba took to Twitter today to announce that the TV will be available for order from UK retailer John Lewis on March 12th. Not only that, there will be a demo unit available at the Oxford Street, London, John Lewis store if you want to go take a look at what glasses-free 3D content looks like, and if you want to torment yourself over a TV you’ll probably never be able to afford. 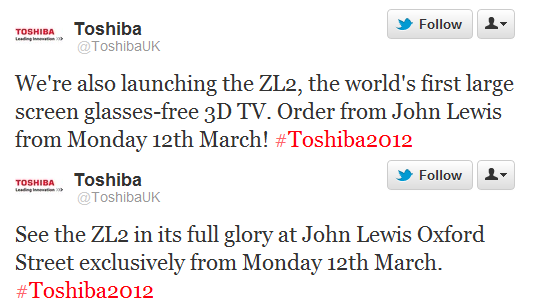 The Toshiba ZL2 is a 55” set with a 3840 x 2160 resolution, featuring Toshba’s Resoultion+ upscaling technology so that your existing DVDs and Blu-rays look as good as possible on the display. Auto Calibration support also means that colour temperature, gamma, and greyscale are all correctly set, helping you to get the best possible image out of the TV.

There’s also built in WiFi capabilities, as well as DLNA, so you’ll be able to stream your content to the TV via your PC or smartphone. Freeview HD and BBC iPlayer support are also on board, as well as video recording via a USB hard drive. Connections include four HDMI ports and two USB ports.

Pricing is yet to be confirmed.