Toshiba has revealed its latest Android Honeycomb tablet, the Toshiba Thrive 7″, as as the name suggests it’s a 7-inch version of the existing 10-inch Thrive. Running at 1280 x 800 resolution and using what Toshiba calls AutoBrite, Adaptive Display and Resolution+ technology for better graphics and outdoor visibility, the Thrive 7″ runs Android 3.2 on NVIDIA’s Tegra 2 paired with twin cameras and either 16GB or 32GB of storage.

On the back there’s a 5-megapixel camera, paired with an LED flash, while up front is a 2-megapixel camera for video calls and vanity shots. There’s WiFi, Bluetooth and GPS – though no 3G/4G option, at least for the moment – while wired connectivity includes mini USB, micro HSMI and a microSD card slot. 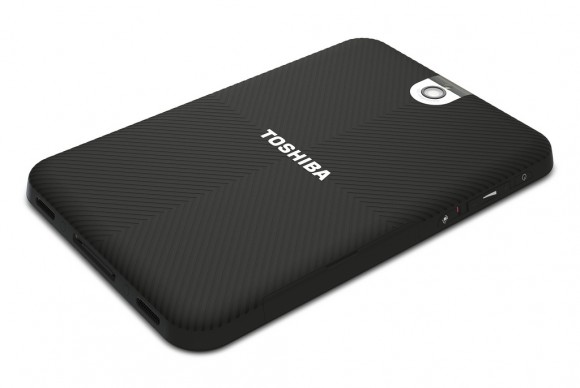 Design-wise, Toshiba has stuck with the original Thrive’s somewhat industrial aesthetic; the Thrive 7″ has a rubberized back panel with an easy-grip ridged texture that leaves it looking chunkier than even its actual 0.47-inch thickness would suggest. Weight is 0.88 pounds, and inside there’s a gyroscope and an unspecified battery, with Toshiba yet to confirm exact runtimes.

Availability of the Toshiba Thrive 7″ is expected in November 2011, according to the company’s site, though we’ve also been told early December by the company’s reps. No word on pricing at this stage.