You might think that buying and using a hard drive is a simple matter of picking one from a catalog and connecting it inside a computer. That may be true fro the simplest of desktops but when you factor in devices like NAS products, the selection process can be quite daunting, especially when data storage manufacturers aren’t so forthcoming with critical details. To dispel any lingering doubt and confusion, Toshiba and Western Digital have released the list of hard drives that use the now somewhat controversial SMR technology and which ones don’t.

Shingled Magnetic Recording or SMR has become one of the latest ways data storage technology has been addressing the age-old problem of how to expand a hard disk’s capacity. This technology works great in utilizing every inch of a disk’s tracks but comes at the expense of performance when writing in random locations in memory. Unfortunately, that’s exactly the kind of random writing that NAS drives need.

After a brief drama and some allegation hurled over the Internet, hard drive makers are making it clear that they don’t recommend using SMR HDDs in NAS products. In fact, the hard drives they market for NAS solutions don’t use SMR. Toshiba’s N300, for example, doesn’t but its product lines for “client drive application” like desktops and even consoles do use SMR.

Western Digital, whose WD Red sparked the episode, has now also come out with a chart of which drives use SMR and which ones use the Conventional Magnetic Recording tech or SMR. It does indicate that its WD Red drives with lower 2 to 6 TB capacities use Device Managed SMR (DMSMR) that makes removes the need for the NAS or the computer to manage SMR writing itself. It still insists that DMSMR is fine for small business or home NAS because of intermittent use, leaving idle time for the drive to do data management in the background. 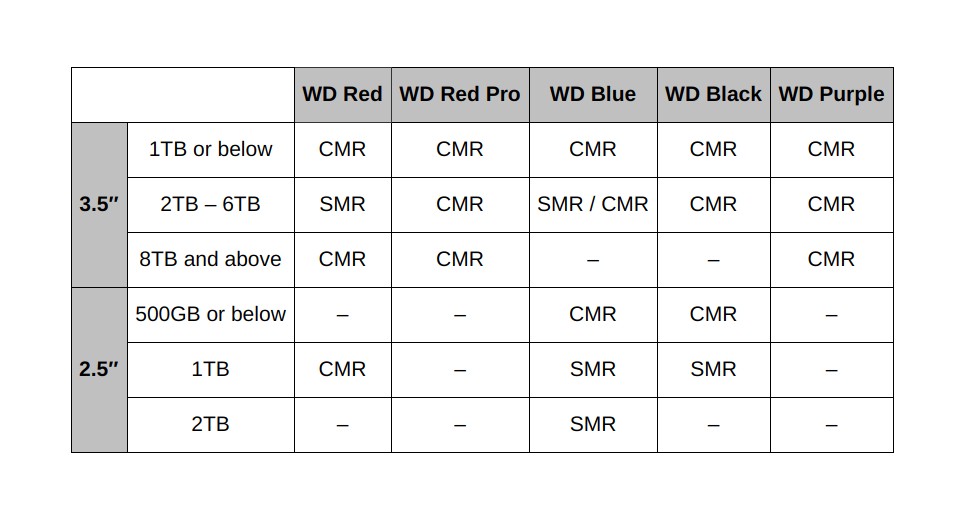 It is definitely good that hard drive makers are making their stances and products clear to consumers. That should have been the case in the first place but some opted to hide technical details behind marketing language, giving rise to some confusion and, in this case, accusations, warranted or otherwise.