Toshiba‘s first MID (Mobile Internet Device) has made its debut, in the shape of the Android-based Toshiba AC100. Using a form-factor we’d more commonly describe as a netbook or smartbook – Toshiba say they picked the classic design over a more common slate-style MID because it’s more familiar for users and offers better ergonomics and text-entry – the AC100 runs NVIDIA’s second-generation Tegra 250 chipset making it 1080p HD capable.

First impressions and hands-on video after the cut

The 1GHz chip is paired with 512MB of RAM and 8GB of flash memory, while wireless connectivity includes WiFi b/g/n, Bluetooth 2.1+EDR and optional 3G/WWAN. There’s also GPS, a USB 2.0 port, miniUSB, HDMI, audio in/out and an SD card reader, together with a 1.3-megapixel webcam. The display is a 10.1-inch 1024 x 600 glossy panel, though unlike on the Compaq Airlife 100 it’s not a touchscreen.

Tipping the scales at 870g and measuring 14mm at its thinnest, the AC100 promises up to 8hrs runtime or seven days standby from a single charge; it’ll also resume from standby in a smartphone-like 1 second. Toshiba have picked Android 2.1 for their OS, though they’ve sensibly made some tweaks to the build to make it more suitable for notebook-style use. That includes preloading a number of apps – including Documents To Go for Office file editing, Fring, the Opera Mobile browser and their own Media Player – together with a custom homescreen that adds a dedicated launcher bar at the bottom of the display. As usual on Android there are multiple homescreen panes which you can navigate between, as well as widgets for at-a-glance information like weather or news updates, and Toshiba have created their own Facebook, YouTube and Twitter widgets. The AC100 can automatically switch between different homescreen layouts based on its physical location, toggling between work and home modes using GPS. 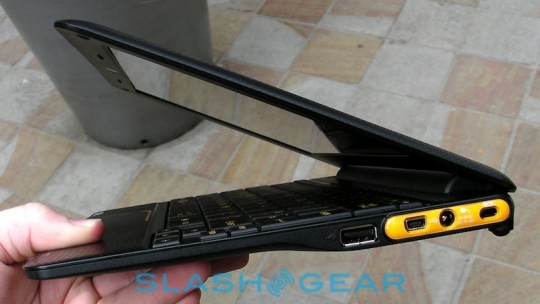 We spent some hands-on time with a pre-production Toshiba AC100, and there’s both plenty to like and a few caveats which could trip up unwary buyers thinking of it as just another netbook. It’s certainly a lightweight machine, though the prototype demonstrated a great deal of flex in both the chassis as a whole and in bowing of the keyboard. We’re guessing Toshiba still have a little work left to do in their software optimisation, too, since sometimes moving through the launcher bar icons using the arrow keys froze or grew sluggish, before catching up and whipping past the option we were aiming for. Connecting over the optional 3G modem – in this case on the Vodafone UK network – rendering was slow despite displaying a decent signal. There’s also no Flash support in the browser, though you can view YouTube videos through the dedicated app and Toshiba tells us that an update to Android 2.2 complete with Flash 10.1 is scheduled for release sometime over the next few months.

Potentially more frustrating is the limited peripheral support of the Android OS, something Airlife 100 owners have also discovered. External keyboards, mice and storage will work fine, but try to plug in, say, a printer or a digital camera and you’ll only get an error message. Toshiba have preloaded a printing app called “Single-Click Printing” that routes documents over your internet connection and then back to a shared printer on your home or office network, but it’s not ideal if you’re out and about but want a hard copy of something. Finally, our natural inclination when faced with the Android homescreen was to reach out and tap it, something of course the AC100 isn’t set up to respond to.

Toshiba describes the AC100 as falling into a new segment, between the smartphone and the laptop, and co-existing with rather than replacing their current netbook line-up. Their success at that will depend on how the MID is priced, particularly the 3G-equipped model, when it hits shelves in August 2010. Assuming they can keep to that release window, it should make the Toshiba AC100 the first second-gen Tegra based product to reach the market.

The Toshiba AC100 is the ultimate device for simple, instant and efficient web use. Designed to be used whenever, wherever you are, the AC100 is instantly ready for action, offering up to seven days standby under mixed use, with a rapid start-up time of less than a second. In constant use the AC100 can provide up to eight hours of battery life, which combines with the intuitive full-size keyboard and compact clamshell form factor to offer a truly stunning mobile device.

Take-anywhere design
The AC100 offers a stunning black and orange design that’s easy to take anywhere, thanks to an ultra-light weight of just 870g. Measuring just 14mm at its thinnest point, the device is extraordinarily slim – making it easy to fit into any bag and carry around all day, every day. A 25.7cm (10.1”) T oshiba TruBrite screen with LED backlighting offers outstanding reproduction of all on-screen content, and the full-size keyboard guarantees easy and comfortable typing – making it perfect for keeping in touch with friends via email or social networks.

Personalised mobile computing
The AC100 runs on the AndroidTM platform, enabling users to customise their device to suit their computing habits. Depending on location or what the AC100 is running, AndroidTM can automatically switch to a prefigured home screen to best suit the user. For example, users can set shortcuts for work-related applications, widgets and ‘live-files’ to appear when working in the office, or personal applications and widgets to appear when the AC100 detects they are at home. Users can also manually switch between home screens as they wish – allowing them to access all of their content, wherever they are.

The intuitive user interface also offers the possibility for users to further personalise the device by downloading a range of applications and widgets on-demand. A number of applications are also pre-installed for immediate use out-of-the-box, including Documents to Go for viewing and editing Microsoft Office files, a POP3 email client, IMAP and Exchange support, a messaging client, Opera Mobile for browsing the web, and the Toshiba Media Player for playing and viewing video, music and pictures.

The latest wireless connectivity also enables the users to stay connected at all times. 802.11b/g/n Wi-Fi provides fast and rapid internet access from any wireless hotspot, and the option of an integrated 3G module allows users to get on-demand Mobile Broadband connectivity from cellular networks for instant web connectivity, wherever they are1.

The AC100 is designed for the growing number of users that are storing content such as photographs, videos and documents on cloud based applications or virtual storage. 8GB of NAND Flash memory also provides users with fast, efficient and robust storage for their personal content. An integrated SD card slot also provides the ability to expand storage on- demand, or display images, documents and personal content. For users that want to output content, an integrated HDMI port provides simple connectivity to any HD ready screen or projector.