Racing video games have been the bread-and-butter of the video game industry since the very beginning, standing tall alongside side-scrollers, sports titles, and RPGs as the backbones of many a successful franchise. They’re an easy sell, really: throw some fast cars and exotic locations, in digital form, at a demographic that’s too young to legally drive, and you’re bound to find more than a little traction.

Driving games have come a long way since the days of a quarter-a-play and wooden steering wheels attached to your Colecovision, but it’s important to recognize the pioneers that helped get us where we are today. We’ve put together this list of what we consider to be the 10 best classic racing videogames of all time in a bid to give credit where credit is due – or in some cases, two credits to continue. 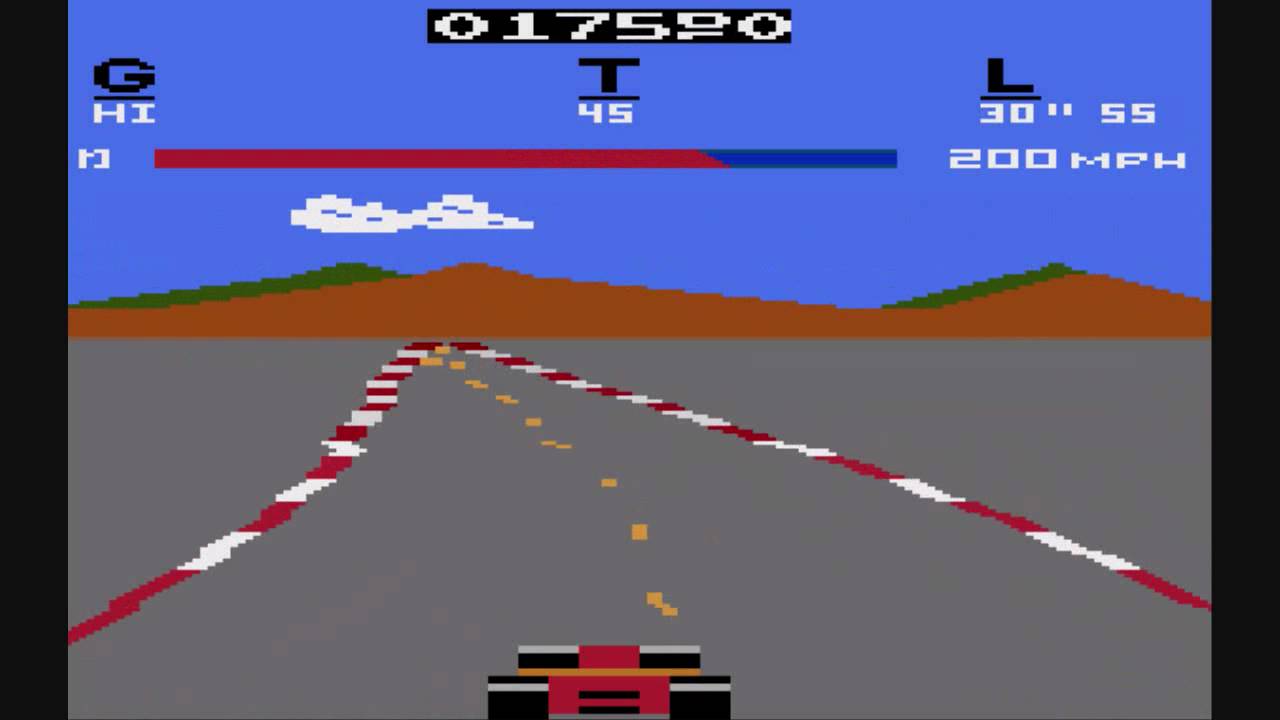 For many, this was the racing video game that started it all. Whether you found it in an arcade, or snapped the cartridge into your Atari at home, the simplicity of Pole Position was simultaneously a big part of its charm. Keeping the car relatively motionless (except for side-to-side maneuvering) while animating the confines of the road was a successfully hypnotic strategy that minimized processing demands while maximizing fun, and as we’ll see it spawned several imitators that added their own unique flair to the equation. Pole Position was also a massive success, beating out every other game in terms of revenues in 1983, just a year after it was first released. 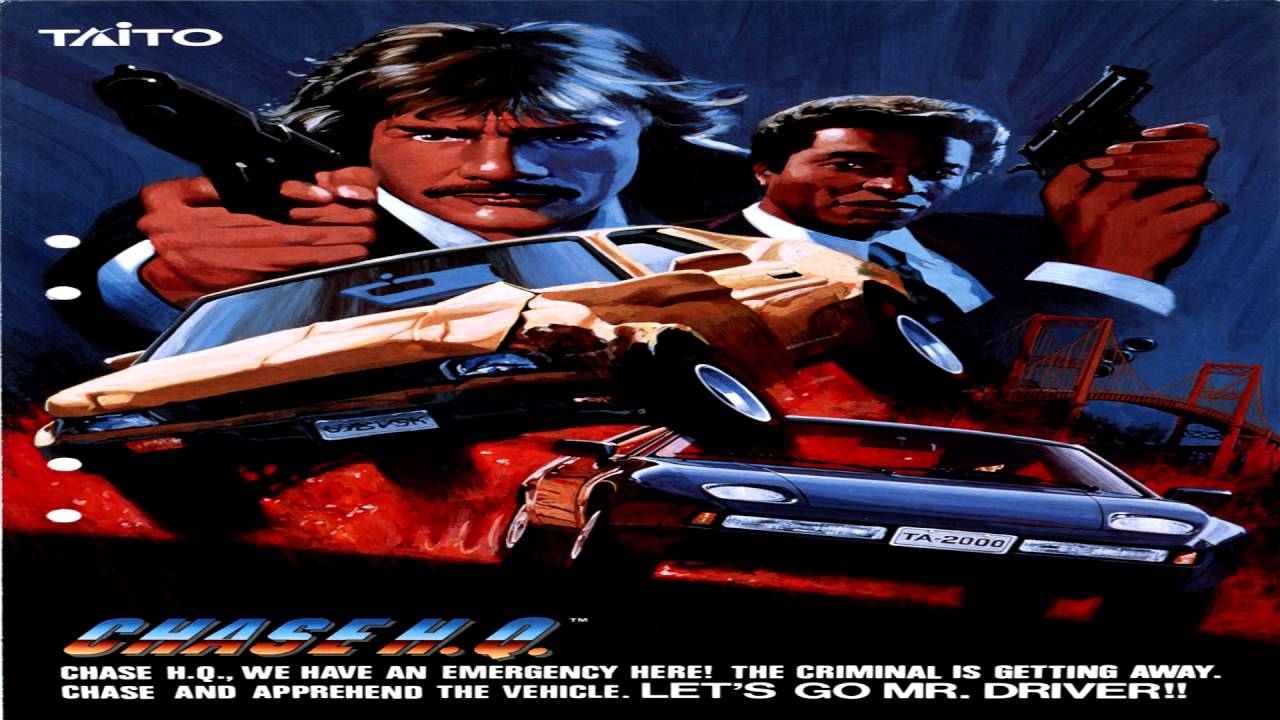 Taito’s Chase HQ was basically Pole Position with much better graphics and the concept of law and order through in to boot. Chasing down escaping bad guys from the same just-behind-the-car vantage point of Pole Position was a blast, especially since you were behind the wheel of a Porsche 928, and using the High/Low gear selector to boost your way into the perp’s bumper to bust them was engaging enough that two buddies could work a together and have fun on a single quarter. 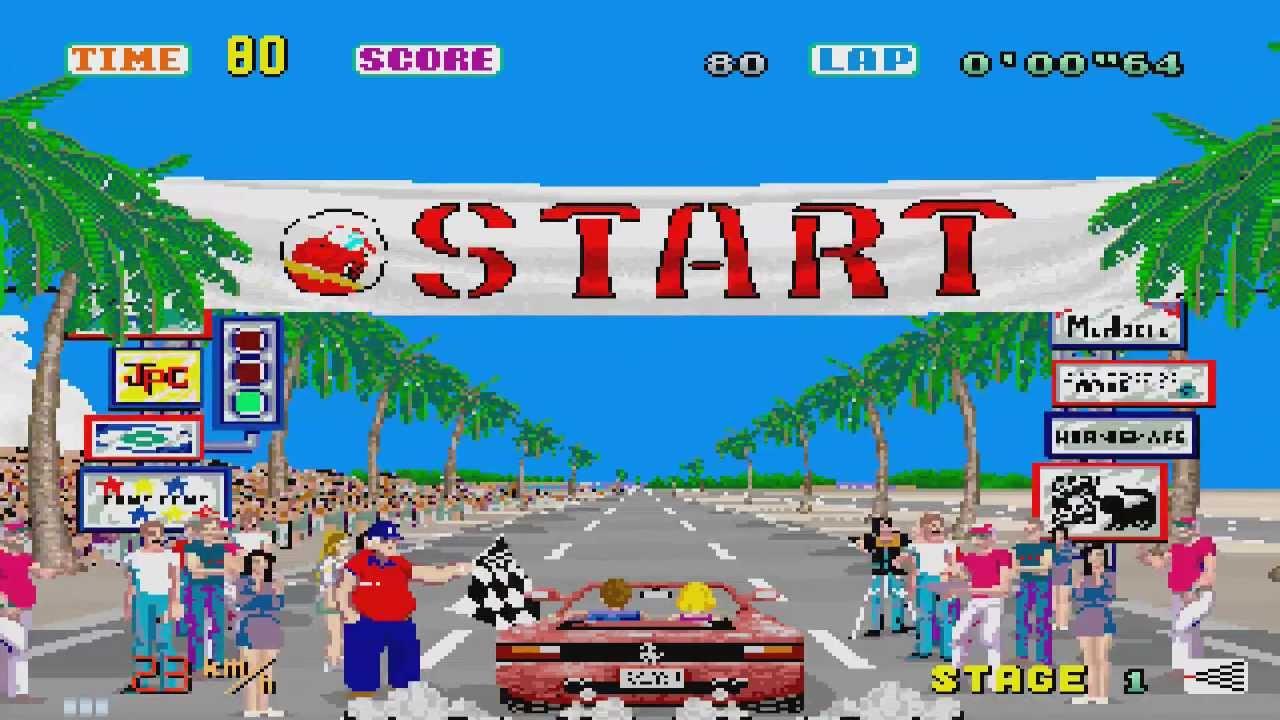 Outrun was the ultimate evolution of the Pole Position concept, only this time you were driving an awesome Ferrari down palm-lined boulevards at speeds that would have given Atari developers an aneurysm. Arcade versions of Sega’s Outrun also offered a number of different cabinets to choose from, and if you were lucky you scored the sit-down design that would actually move around you while you piloted your Prancing Horse. Outrun would see a number of sequels, and is still found in modern arcades with updated graphics and sound (but the same basic gameplay). 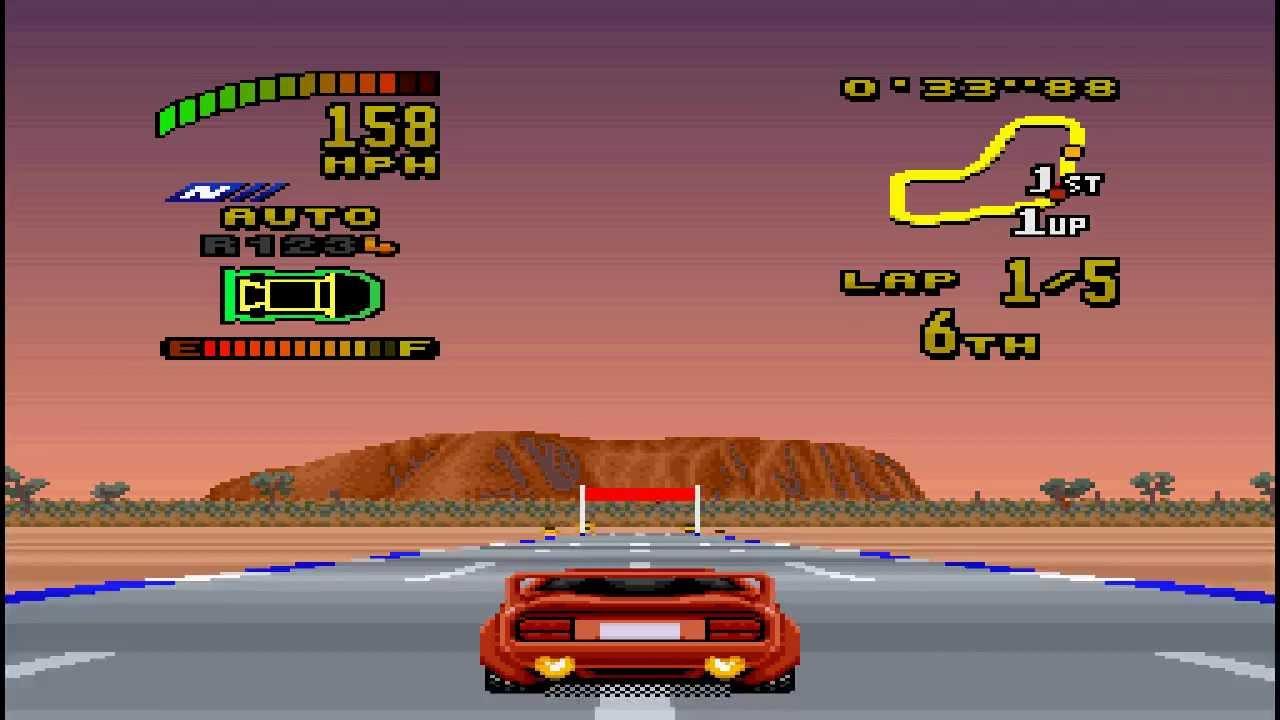 The Top Gear series of games combined a number of key concepts that had been explored by other Super Nintendo racing games, but never together in the same package. Specifically, Top Gear (later expanded on by Top Gear 2) allowed for split-screen racing against a buddy, along with the ability to upgrade your car as you moved from race to race. It was innovative for its time, and the less said about the third member of the franchise – Top Gear 3000 – the better. The gameplay and graphics for Top Gear were based on a trilogy of PC games released by Gremlin Interactive called Lotus Esprit Turbo Challenge, which never made it to the SNES but did receive a limited run on the Sega Genesis. 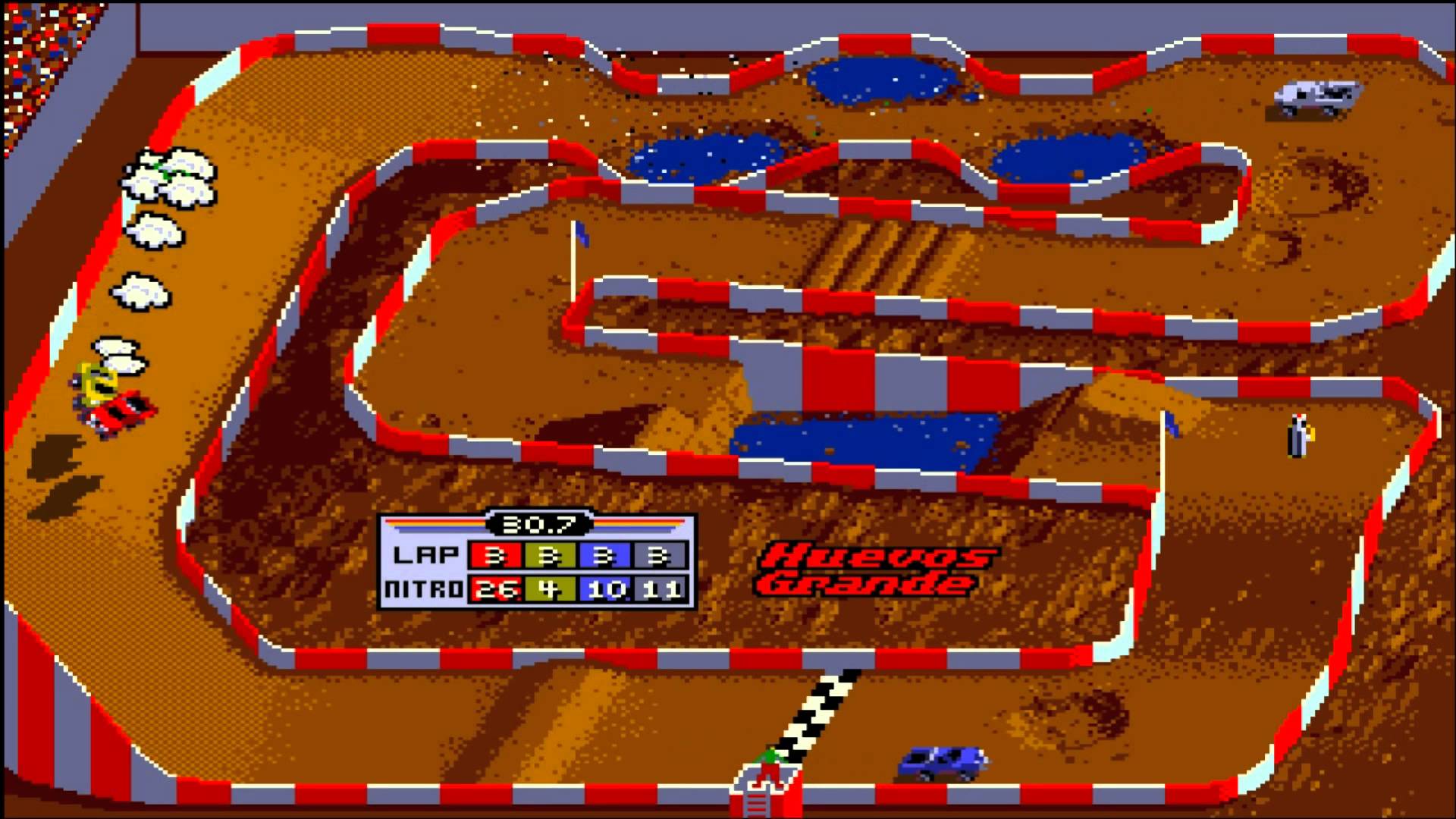 Ivan ‘Ironman’ Stewart’s Super Off-Road was impossible to ignore when it first came out, as it was that crazy game with three steering wheels at your local arcade. It took a very simple concept – racing small Baja 1000 trucks on a set number of laps on an enclosed course – and made it fun by including pick-up bonus cash, nitro bursts, and steering wheels that spun an infinite number of degrees in any direction. Ported to both Nintendo and Sega consoles, the game also pitted you against the ‘Ironman’ in every heat (he was the guy consistently beating you and your buddies to the finish line). Fun fact: Off-Road was one of the few games of the era that allowed you to run the entire event in reverse and really piss off your friends by hitting them head-on over and over and over again. 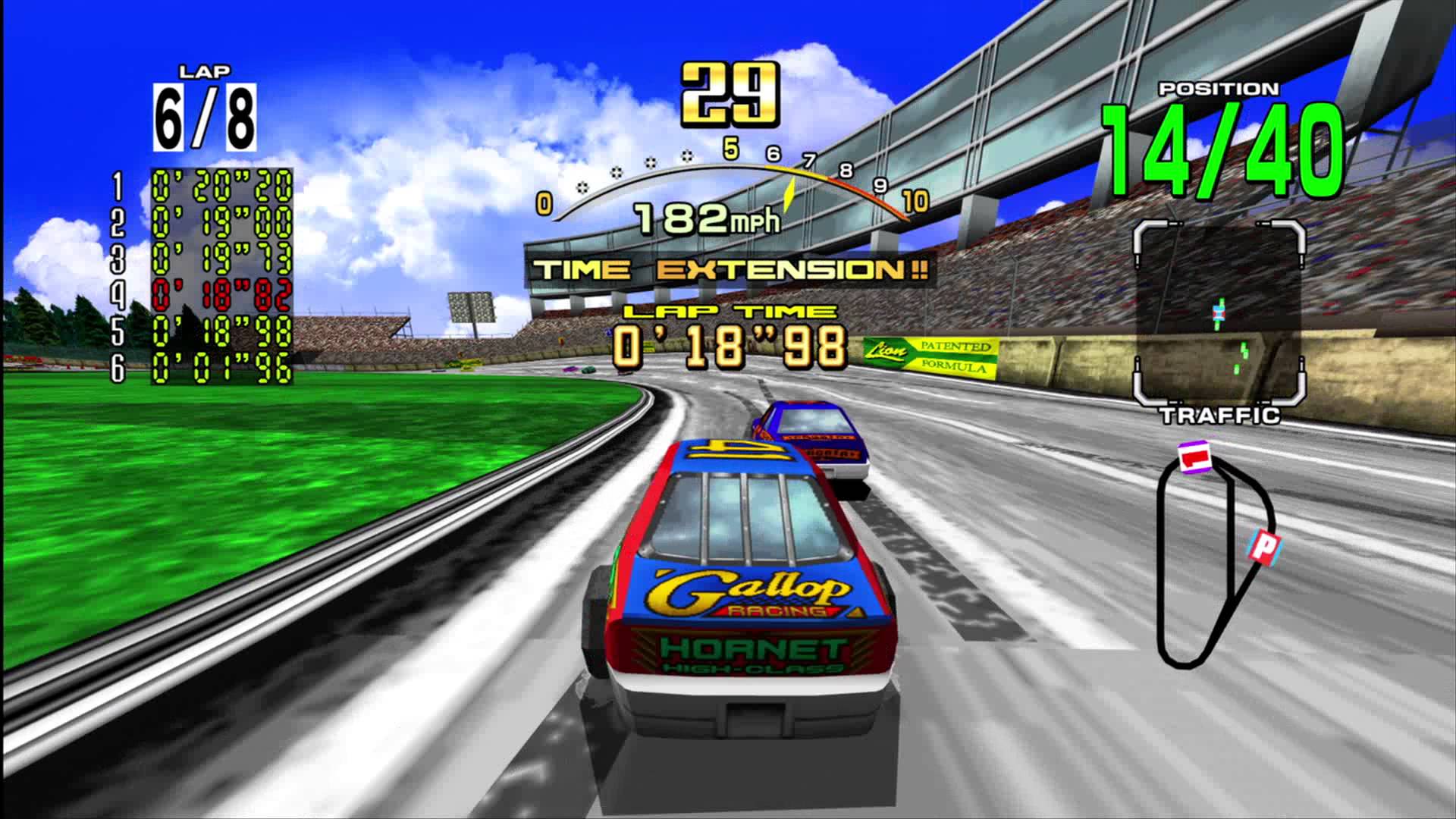 Once polygon-style graphics really started to come into their own with full texturing and color in the mid to late 1990s, racing videogames started to get a lot more serious. Released in 1993, Daytona USA was on the vanguard of arcade driving sims that strove to balance fun with realism, offering three tracks where you could pilot your stock car against up to four live competitors with varying degrees of adherence to actual physics. Taking texture-mapping to the next level, Daytona USA would hit every major console and be followed by three sequels of its own. 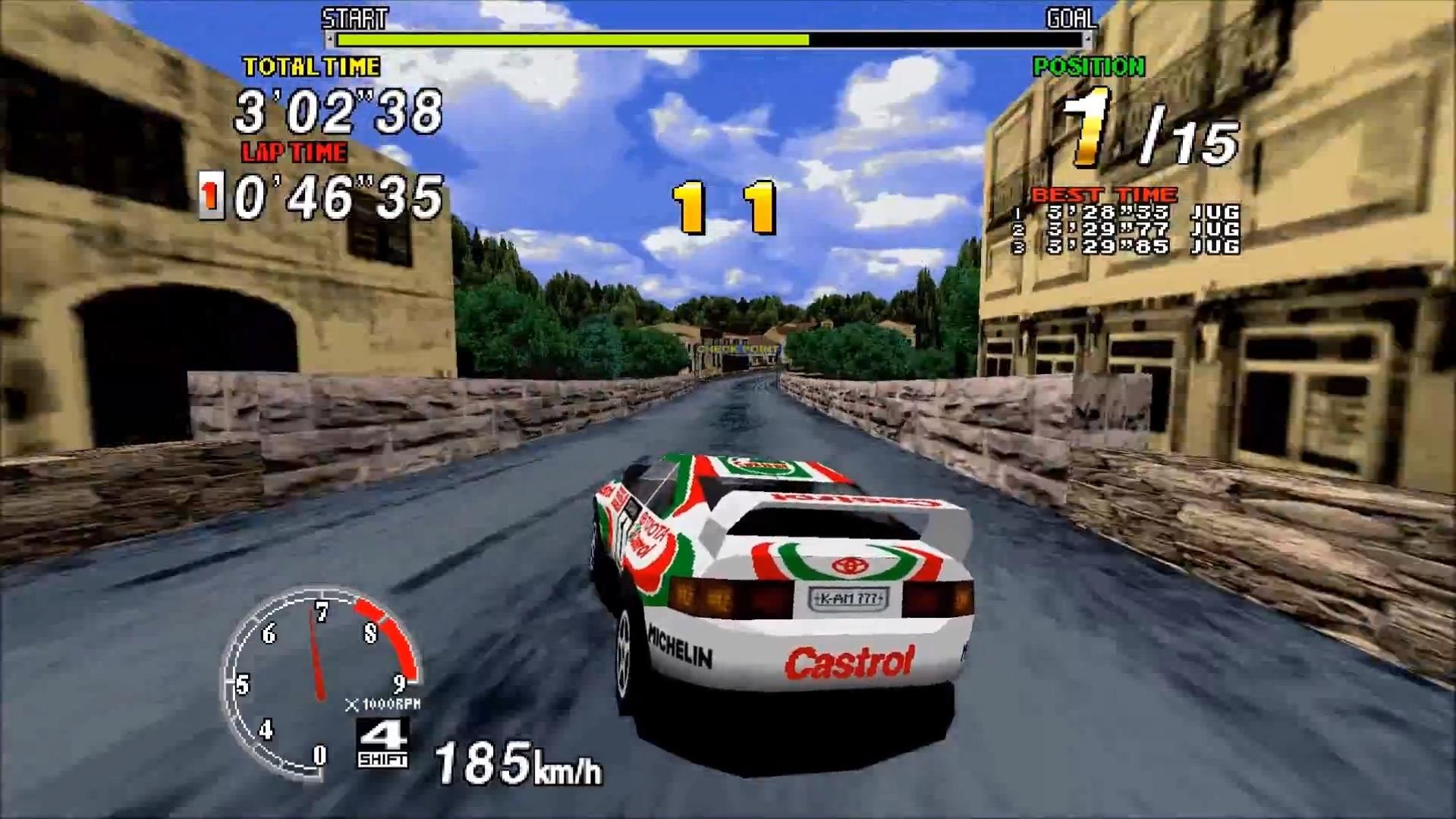 Once video game companies figured out that you could have as much fun in the dirt as you could on the asphalt, it was a small step to take towards translating the rally racing experience to ones and zeros. Sega Rally Championship and the four other titles released in the series were arguably the best of the first wave of games that tried to capture the frenetic chaos of WRC competition, kicking open the door for the wave of console games that would follow. 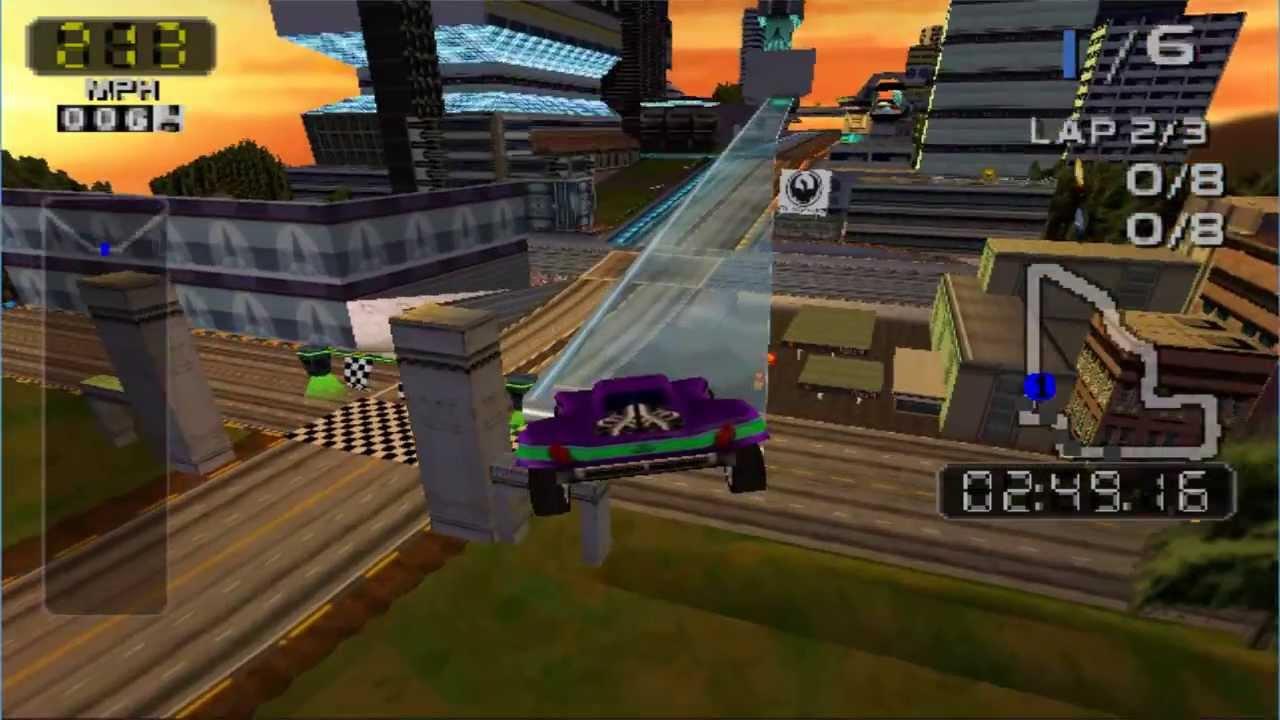 Atari’s San Francisco Rush was like very little else when it first began to infiltrate the arcades in 1996. On the surface it was a physics-free bit of driving whimsy like the Cruis’n USA series, but drop in a token and you’d soon discover a much-expanded playable world as compared to traditional driving titles, with short-cuts, epic jumps, and hidden passages splitting you off from the rigidly-defined borders of traditional racing games. Then there was the sense of speed that indicated a new generation of coin-op driving had arrived. Much like Cruis’n USA, Rush would inspire a number of other titles that would find their way into arcades and consoles, with varying degrees of success. 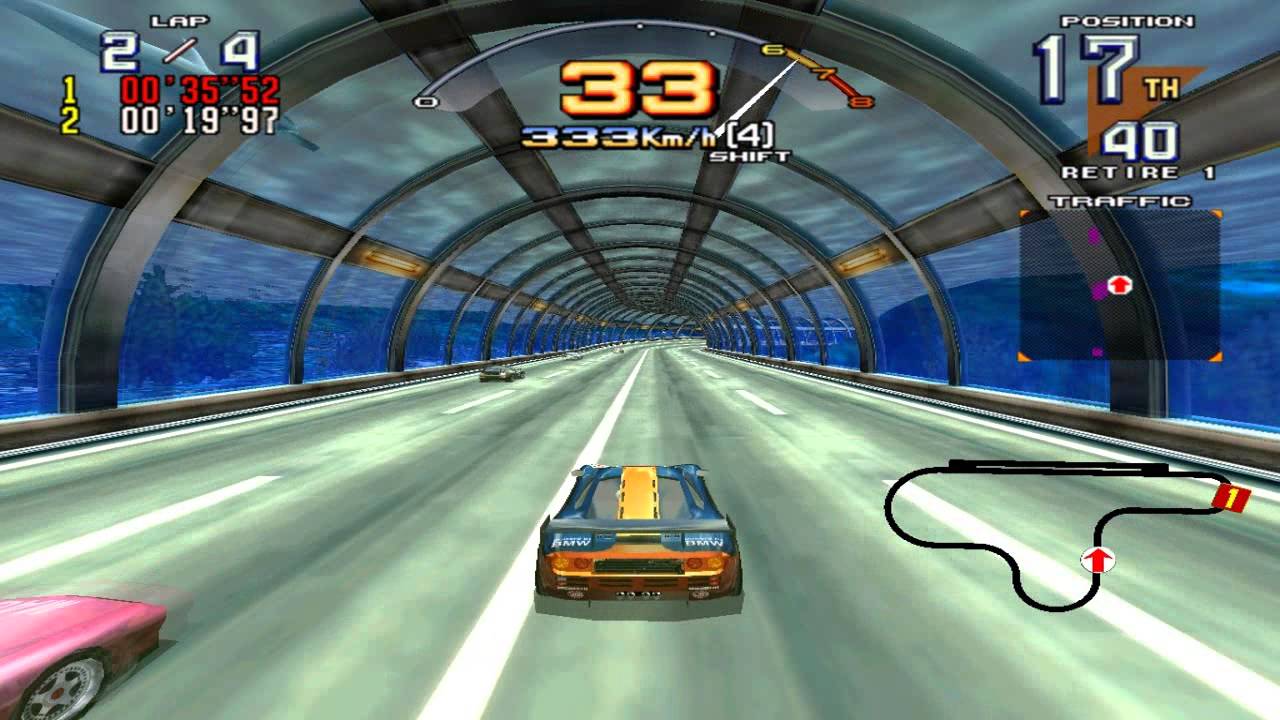 The concept was simple: Choose between a Porsche 911, a McLaren F1, a Ferrari F40, and a Dodge Viper, and then race them head-to-head with your friends through incredibly (for the time) immersive environments that challenged the accepted perspective of where a race could take place. Sega built this game off the bones of Daytona USA, but you really wouldn’t know if from the radically different gameplay, and the ability to drift at will through the corners. This is the game that swallowed more of our school-boy quarters than any other, and the one that still has us cruising eBay for used sit-down cabinets (and wondering where the hell we’re going to put them, because you simply can’t play this one solo). 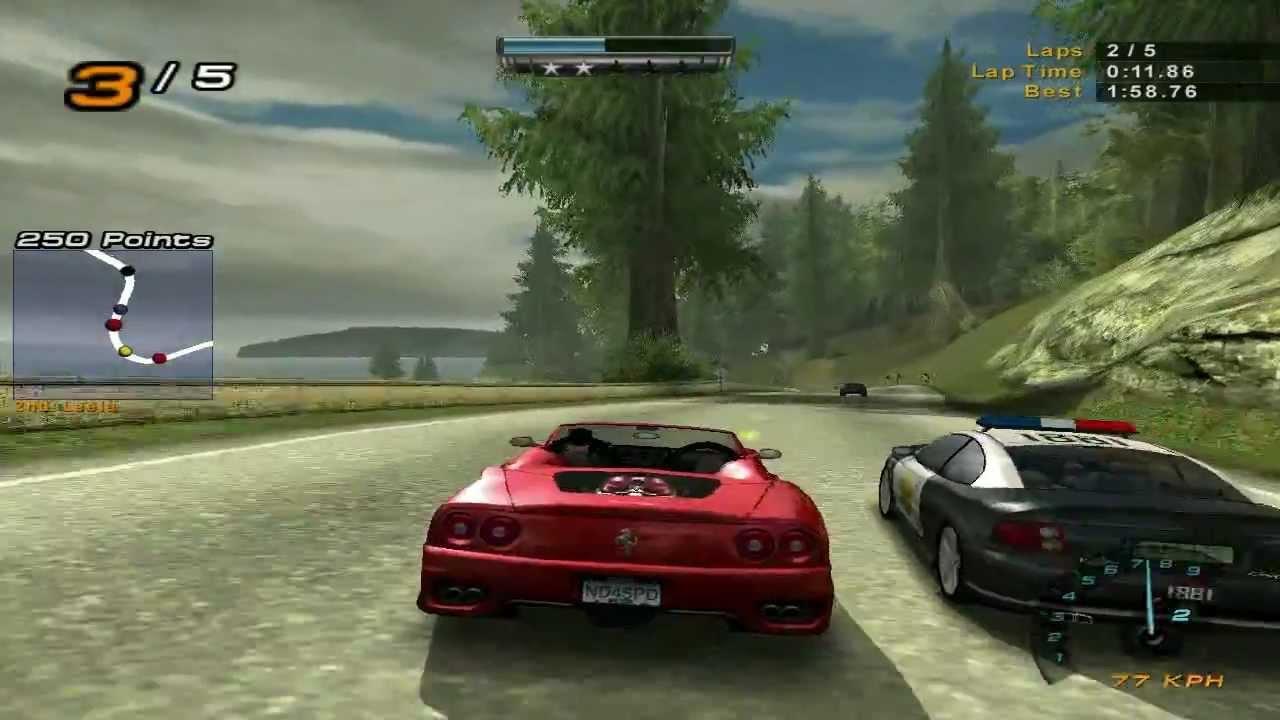 Many PC game franchises have come and gone since the arrival of the Playstation 2 signaled that consoles could handle the graphics and speed demanded by racing sim fans, but Need For Speed has endured. Never one to take itself too seriously, NFS has gifted the world with so many spin-offs (including titles focused on escaping law enforcement and rising up in the world of street racing) because it was so good at being just real enough to pass the sniff test with enthusiasts, but also fun to the point where ‘real world’ physics were occasionally thrown out the window in favor of a good time. The original was a breath of fresh air in an industry that sorely needed it at the time of its release. 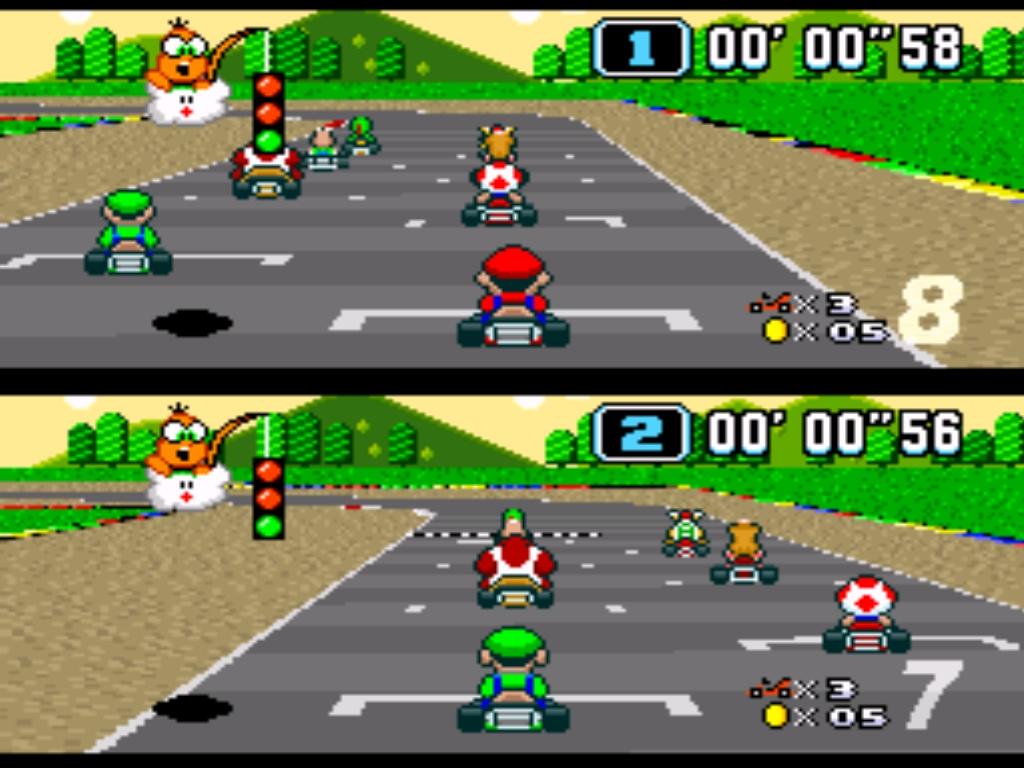 To this day, it could be argued that it’s worth owning a Super Nintendo simply to beat your friends/siblings/arch-enemies at Super Mario Kart. Long before it became an all-conquering franchise that would spawn every post-90s console ever released by Nintendo, Mario Kart was a goofy concept that eschewed the testosterone and realism of the racing world in favor of a simple concept: how about we just stick familiar 8-bit and 16-bit characters on low-powered go-karts? Setting them loose in easy-to-memorize short tracks and giving them the ability to collect coins, power-ups, and launch turtle shells at each other transformed Super Mario Kart into a bloodsport that drew out the competitive fervor in anyone who played it. Not just an amazing racing game, but still a great game, period, over two decades later. 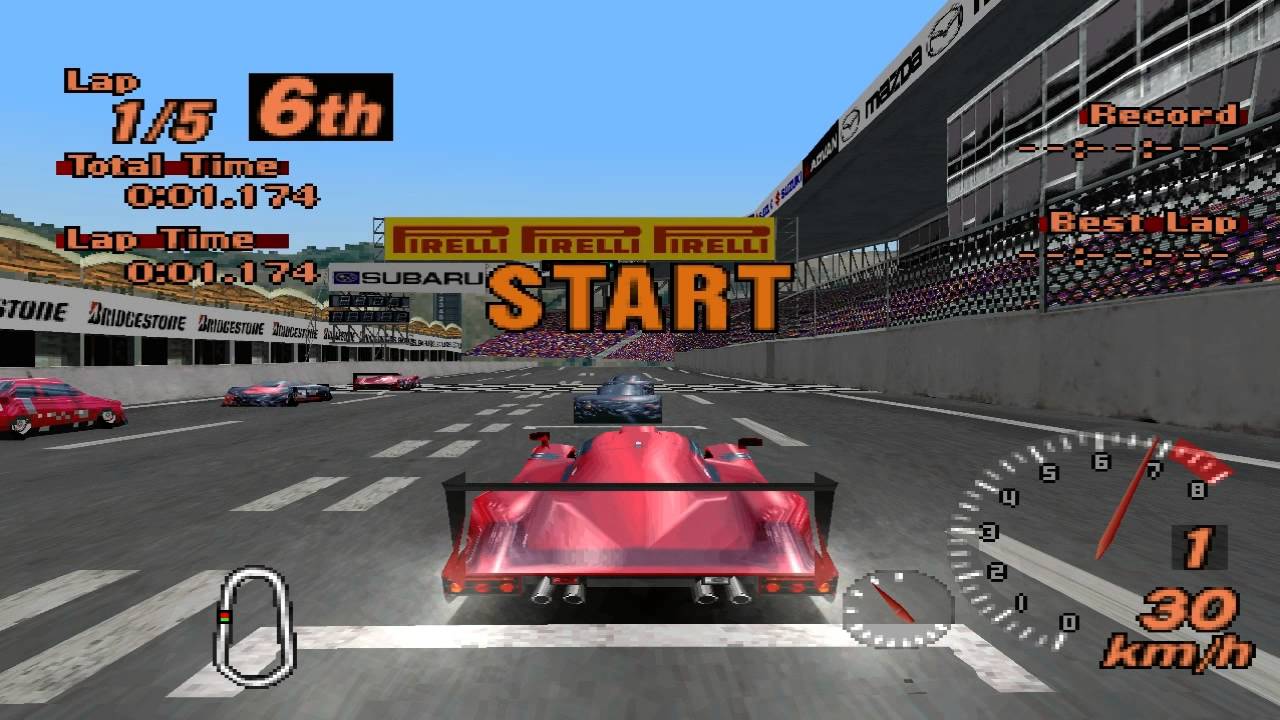 Some would argue that it was the emergence of Gran Turismo 3 on the Playstation 2 that cemented the series’ claim – alongside the more modern Forza Motorsport – as one of the premier racing titles on the market. Still, we have to hearken back to Gran Turismo 2 on the PS1, which had us enthralled with all of the available customization options, the outstanding track design, and the ridiculously deep dive into obscure Japanese automobiles that it had to offer. We played it for days, weeks, months on end, and it set the pattern that other Gran Turismo titles would expand across the next three Playstation consoles. 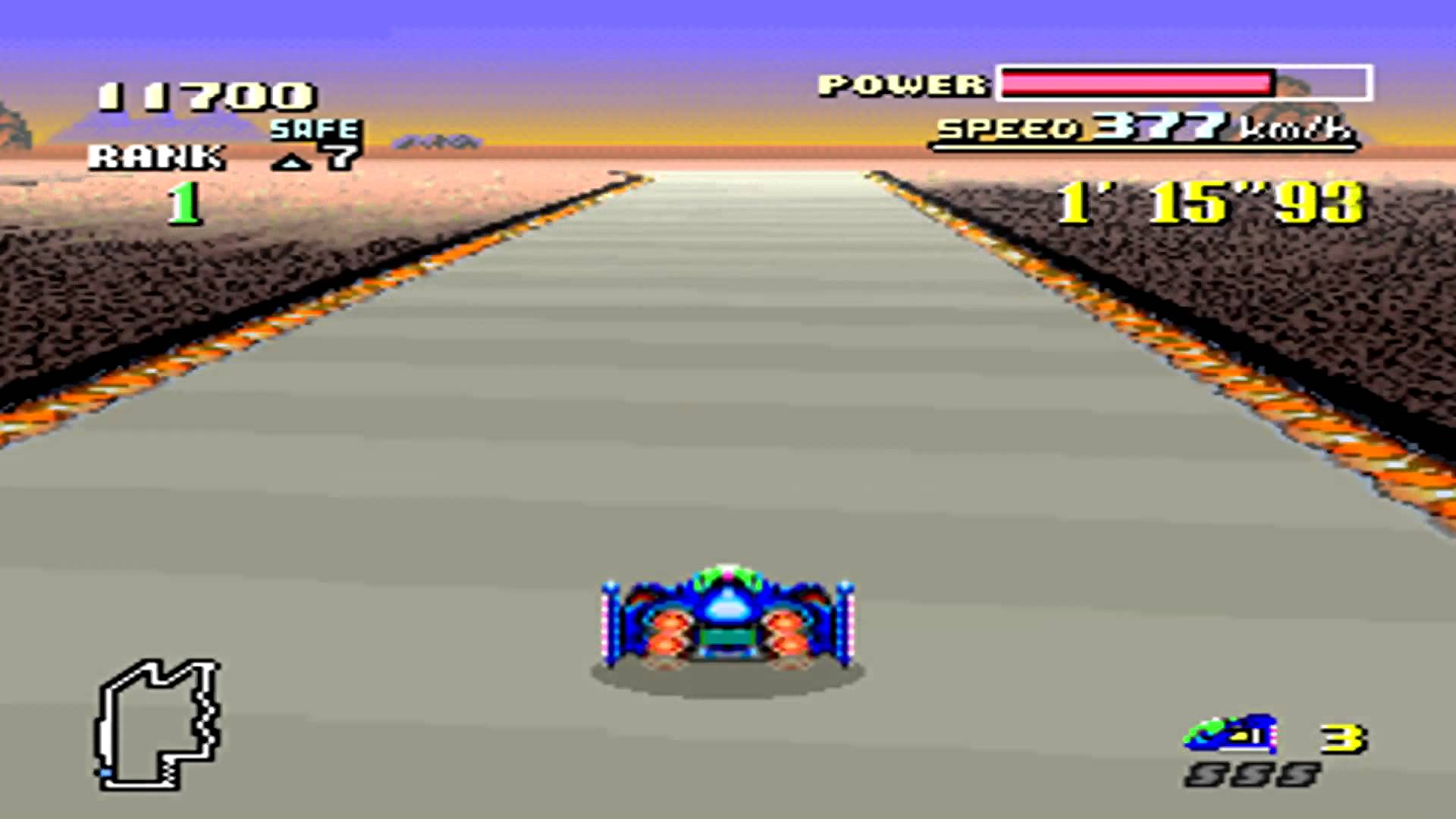 F-Zero is, by our estimation, the best classic racing game to have ever been unleashed. It was one of the early titles that really put the SNES on the map by showing us just what it could do in terms of rendering speed and sound playback (dubbed ‘Mode 7’ by Nintendo’s branding wizards), and it boasted a soundtrack that is still being remixed by electronic music artists today.

Rocket-quick hoverships battle for supremacy across a challenging landscape littered with mines, jumps, pits, and ruthless adversaries, and while there are only four hero ships to choose from you better get it right, because each has its own set of game-altering characteristics that make them rewarding, but difficult to master. We can still beat the game using only one hand.

Disagree with our picks of the best racing games of all time? Let us know in the comments!