Tomy Xiao camera with built-in printer available in US

The Tomy Xiao digital camera with built-in Zink printer has gone on sale in the US, courtesy of importers AudioCubes.  Resembling a Flip Mino with its upright stance, the Xiao has a 5-megapixel sensor and can instantly spit out 2 x 3-inch sticky-backed prints. 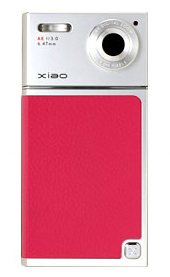 Built into the camera are multiple templates, borders and frames to let you customize your image before printing it.  Prints themselves take around a minute to produce, but unlike a traditional Polaroid camera you do at least have the option of which shot to get a hard-copy of.  The Zink paper itself costs around $12.99 for a pack of 30 (roughly 43 cents a print).

However the price of such impulsive convenience is high.  While the Xiao is on sale in Japan for the equivalent of around $350, in the US it’ll cost you $499.99.  It’s available in three colors: black, green and a particularly vibrant shade of pink.