TiVo on Xbox One and Fire TV possible after Adobe ousted

TiVo has quietly ousted Adobe from its DVRs, with the freshly-released Summer Update switching away from Flash and Air for the UI, and opening the door to one day running TiVo services on Amazon Fire TV, Xbox One, and other platforms. The new software, for the TiVo Roamio, Premiere, and Mini models, promises a significant boost in interface navigation speed, having been recreated in Haxe.

In addition to being faster, the UI also adds a new “My Shows” column within which the viewer’s favorite content is gathered up.

However, the switch to Haxe could have broader implications than just a boost in speed. According to a presentation created by the TiVo/Haxe developers, transitioning to Haxe opens the door to one day adding TiVo services to third-party devices, including Fire TV, Microsoft’s Xbox One, and Smart TVs. 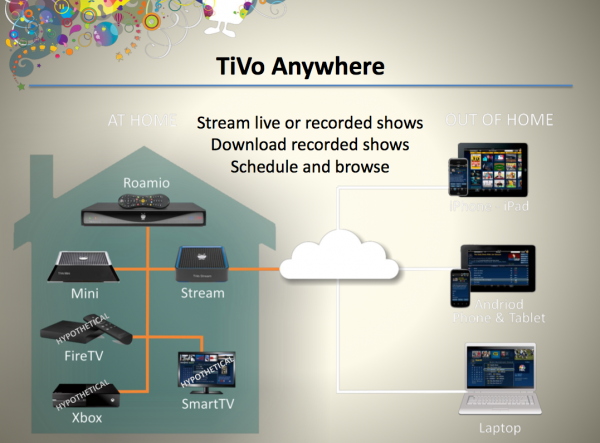 It’s not just theoretical, however. Former Flash platform developer Piergiorgio Niero tweeted a photo of the TiVo service running on Amazon’s set-top box back in May, it having been demonstrated at the World Wide Haxe Conference 2014.

According to Niero, the port used exactly the same code, simply recompiled to run on the Fire TV.

Of course, just because TiVo could do that, it doesn’t mean it necessarily will, though the motivation for the company might well be growing as set-top box options proliferate. Spreading TiVo service to other platforms – though presumably relying on one of the company’s own DVRs as the heart of such a system – could encourage multi-user setups, something which TiVo currently supports but dependent on its own extenders.

TiVo firmware 20.4.2 “Summer Update” is rolling out to users over the next three weeks, with the company expecting to have everybody upgraded by the end of July.