We’ve seen a lot hacks and mods that aimed to relive the glory days of Nintendo’s most beloved handheld, the Game Boy. Specifically the Game Boy Color. Those ranged from near exact replicas to larger than life cabinets to palm-sized miniatures. Given off the shelf components, the smallest one could possibly get would be somewhere along the size of a Raspberry Pi board. Well, not anymore. Thanks to some dedication and persistence, Sprite_TM was able to craft what is perhaps the world’s smallest GBC clone, small enough to clandestinely stand beside your keys.

Making a “handheld” gaming device of this size had both ironically large problems, both in hardware and software. On the hardware side, finding a screen small enough to fit in the constrained space yet has enough pixels to match the GameBoy Color was like a wild goose chase. In the end, Sprite settled for a 1-inch $3.80 OLED screen with a 96×64 resolution, quite lower than the GBC’s 160×144. For the microcontroller, he opted for an ESP32 that has a dual-core 240 MHz processor and 512 KB of RAM, Wi-Fi and Bluetooth.

If those specs look rather suffocating, it’s because they are. Which leads us to the next major problem. None of the ready to use emulators are designed to run on such painfully weak hardware. Fortunately, Sprite is both a hardware and software hacker and was able to retrofit the open source GNUboy emulator to run on the gaming “fingherheld”. He was also able to get around the limitation of data storage space by taking advantae of the ESP32’s built-in Wi-Fi capabilities, which lets him transfer a ROM from a remote server to the device when needed. That said, the Game Boy Color mini can only store up to 4 games at a time.

You are unlikely to see such an insane contraption for sale, especially en masse. Fortunately, Sprite was generous enough to detail his adventures and misadventures in creating this mind-bending tiny gaming device, including the exact components and processes he used.

As a bonus, the little gaming device was able to run DOOM, the ultimate test of whether something is a computer or not. Of course, performance was nowhere near playable, but at least it runs. Almost ironically, it could play the Witcher 3 just fine. Of course, that’s just smoke and mirrors, as it was done using a remote desktop accessed via VNC. 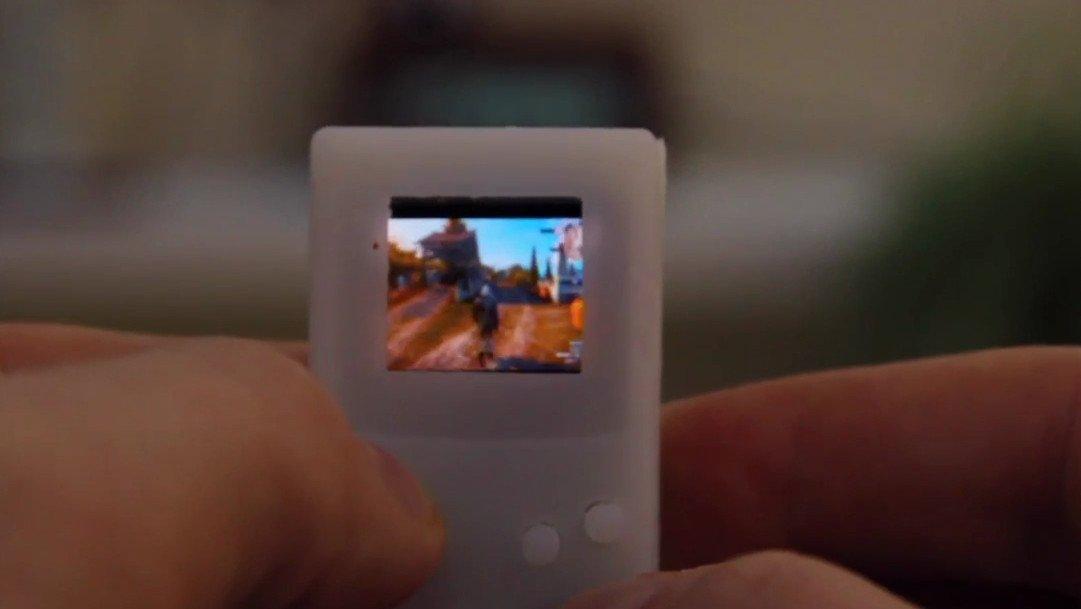