Tim Berners-Lee invented the World Wide Web. As he mentioned today in his Reddit AMA session (that’s Ask Me Anything, a popular method of popular people speaking to the internet), TBL “coded it up on a NeXT”, while it was Robert Cailliau who was “the first convert to it” and later “wrote some code for a Mac browser called “Samba”. As the creator of the WWW, TBL is (arguably) one of the best people to go to when it comes to considerations for how it might be handled now and in the future – thusly we devour his insight.

The first question we’re looking at here has to do with Edward Snowden. This fellow is the reason we’ve been speaking about the NSA for the past countless set of months. If you take a peek all the way back to our feature SlashGear 101: PRISM, FISA, and the modern NSA from June 16th, 2013, you’ll get an idea of how this all began.

TBL: Because he ✓ had no other alternative ✓ engaged as a journalist / with a journalist to be careful of how what was released, and ✓ provided an important net overall benefit to the world, I think he should be protected, and we should have ways of protecting people like him.

Because we can try to design perfect systems of government, and they will never be perfect, and when they fail, then the whistleblower may be all that saves society.

Next is perhaps the most specifically internet-creator-tuned question of the bunch, asking TBL what might happen to the web in the near future. It’s all about the web browser, for now.

blprnt_ocr: While the web has advanced a lot in the last 25 years, a lot of the user-facing machinery remains the same. My web browser, for example, is faster and has some different functionality, but it still feels very much like Netscape Navigator did in 1994.
Do you have any ideas about how interface for the web could change in a real, transformational way?

TBL: I think that is a really good question. I don’t have the answer off the top of my head. Also think when your vision can be completely surrounded with pixels so small you can’t see them, a very powerful interface — how cna we use that — and to be creative together, not just watch? Inter-creativity I called it early on. Still don’t have it.

The following comment has to do with the proposed addition of DRM to HTML5. You can learn more about this situation – and TBL’s support of it – from our article DRM coming to HTML5 with W3C approval from back in October of 2013.

Xeon06: A lot of people think that your calls for an open web are a bit hypocritical considering your support for the HTML5 DRM spec. What would you tell them?

TBL: I would suggest to them the DRM question is not that simplistic. People want to watch big movies. DRM is a pain in many ways, but if you have used Netflix or bought a DVD or a bluray, then DRM is part of your life. I agree DRM is a pain in many ways, and should only be used for very “high value” streams. I also would point out that Copyright, DMCA aand CFAA in the US are seriously broken, and need fixing separate from the DRM question. Actually I would get involved with a very long complicated discussion, as I have already with many people. Not sure we have space here. Other points include the the browsers have putt DRM in — they have to to keep market share — irrelevant of whether the HTML specs make the connection to the web more standard.

At this point in the chat, TBL also linked to [This Meme] – also included below. This meme is titled “College Liberal” in a general context, usually housing comments like “spends $800 on tattoos / demands free healthcare” or “wears Che Guevara shirt / while shopping at Wal-mart”. 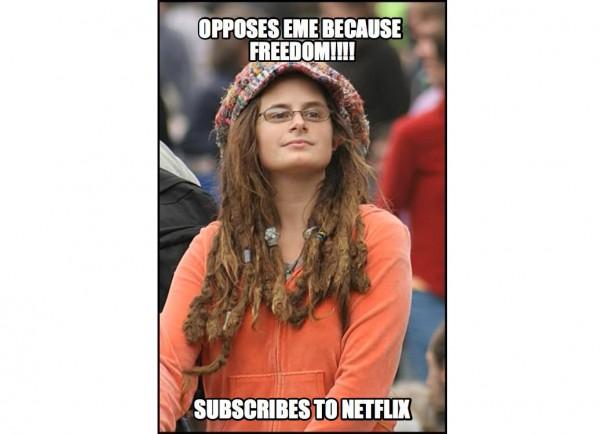 MurrayPhilbman: Do you consider a hamburger to be a type of sandwich, or an entity of its own?

TBL: Your culture is where you went to High School. As a Brit, then, no: “sandwich” does not include “burger”. Mathematically, though, a burger is a sandwich.

While this last bit of insight doesn’t exactly tell us how to run the web for the next 100 years, it’s certainly nice to see that TBL has a healthy sense of humor. It’s things like these that remind us that the internet is the great connector – for all things, not just the advancement of the species.