Thunderbolt 4 is coming, with Intel detailing the next-generation port that promises better performance and more security, as well as greater flexibility on laptops and desktops. Sticking with the same USB Type-C connector as Thunderbolt 3 – and indeed backward compatible with the existing port – computers with Thunderbolt 4 will now support two 4K displays instead of just one.

The 40 GB/s maximum data rate hasn’t changed from Thunderbolt 3, but Thunderbolt 4 certified devices will need to support it consistently, rather than offer the 20 GB/s mode as is currently allowed. As before you get power, data, and video over a single connection. However it means things like the ability to drive an 8K display from a Thunderbolt 4 port, while PCIe data rates will allow up to 3,000 MBps for external storage.

In fact, it’s flexibility where Thunderbolt 4 really promises to shine, not just pure performance. Some of the more frustrating bottlenecks in Thunderbolt 3 have been addressed, such as support for external docks with up to four Thunderbolt 4 ports. Devices wanting to be Thunderbolt 4 certified will also need to support PC charging on at least one port, as well as the ability to wake the computer from sleep by touching a keyboard or mouse plugged into a Thunderbolt dock.

The 15W minimum port power rating is carried over, though of course higher wattages for properly charging laptops rather than just tablets and smartphones are likely. Thunderbolt 4 will also support universal 40 GB/s cables at up to 2 meters (6.5 feet) in length. It’ll be fully compliant with the USB4 specification, too, and Intel says it’s working on supporting cables up to 50 meters in length.

Most important, Intel is also requiring Intel VT-d-based direct memory access (DMA) protection for anything Thunderbolt 4 certified. That should help prevent the sort of physical DMA attacks which we’ve seen talked about in recent months as affecting Thunderbolt 3 devices. That’s because, while VT-d based DMA protection was available for PCs since 2019, it wasn’t mandatory for those including Thunderbolt 3. 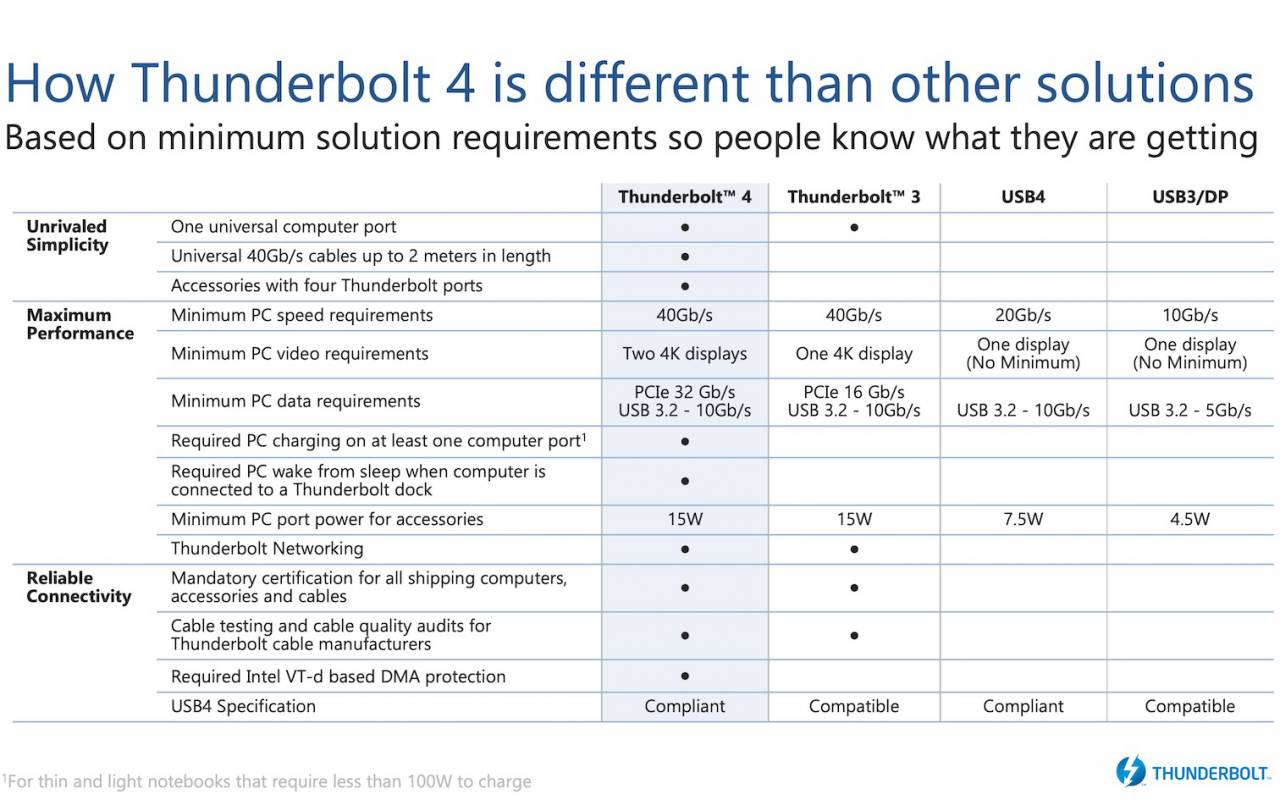 Basically, the system helps prevent against malicious attacks where someone has physical access to your computer – whether that be a Windows PC, a Mac, or a Linux machine – and can plug in a co-opted peripheral. Ports that support PCI Express allow external devices – such as storage, eGPUs, and ethernet adapters – to use DMA and directly access the system memory. That’s great for performance, but it can also mean a security gap if a malicious device has access to shared computer memory.

VT-d, among other things, makes sure that each connected device gets its own, isolated memory region. Outside of that, it won’t be able to access other memory used by other devices.

Intel “Tiger Lake” mobile processors will be the first CPUs to support Thunderbolt 4, as will the new Intel controller 8000 series. That will initially consist of the JHL8540 and JHL8340 host controllers for OEMs building computers, and the JHL8440 device controller for accessories. The first computers and accessories expected to actually launch with Thunderbolt 4 ports should arrive later in 2020, Intel predicts.