There have been some interesting movie tie-ins with tech products over the years. One of the most interesting tie-ins that I have seen has just turned up for the new Thor movie that is in theaters right now. This tech product is a battery charger that looks like Thor’s trusty hammer Mjolnir. The hammer battery pack comes from a company called Infothink. 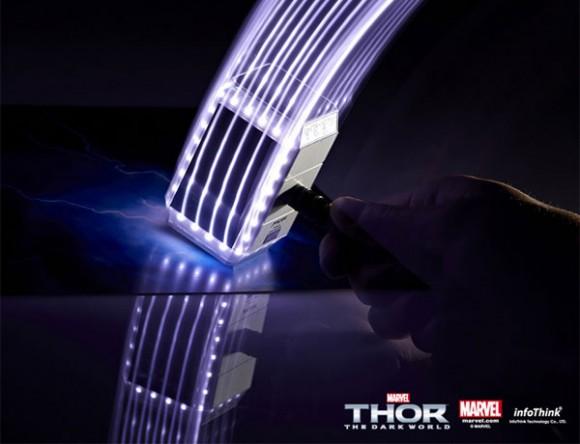 In addition to the full size USB port, the hammer also has a micro-USB charging port. Both of the charging ports output 2.1 amps of power. That means you can charge your smartphone and tablets such as the iPad from the battery pack. Inside the hammer-shaped enclosure is a Sanyo rechargeable battery.

The hammer is available with three different battery capacities inside. The smallest is 2600 mAh, in the middle is a 5200 mAh unit, and the big daddy is a 10400 mAh internal battery. That gigantic 10400 mAh battery needs ten hours to charge on its own. The hammer also has integrated LEDs and a speaker to mimic the sound effects from the film when you swing the hammer. The battery pack is available in Asia right now starting at $125.