This voracious black hole is so vast, physics says it should be impossible

Astronomers with the Chinese Academy of Sciences have announced the discovery of a black hole within our galaxy that they claim has a mass 70 times greater than our Sun. The startling discovery dashes what was previously believed to be the upper limit for a black hole’s mass — one typically thought to top out at around 20 times the mass of our Sun.

The study detailing the findings was recently published in the prominent scientific journal Nature, where the researchers describe their massive discovery. The black hole has been named LB-1 and is located around 15,000 light-years from Earth. The discovery was made possible using a popular technique that involves looking for stars orbiting an object that is invisible. 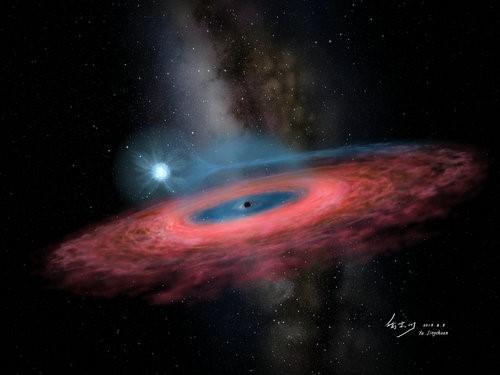 The majority of known black holes were discovered by detecting the x-ray emissions produced when they destroy a nearby star. This process quite obviously has one big limitation: the discovery of the black hole is dependent upon whether it is caught shredding a companion star. This is a relatively uncommon activity, meaning most black holes have gone undetected.

Surveying the sky using modern technology has proven common and useful for detecting black holes over the last few years. In the case of this latest study, the researchers used the Large Sky Area Multi-Object Fiber Spectroscopic Telescope that belongs to China. Once an unusual star orbit was detected, the team used two of the biggest telescopes in the world — one located in Spain and the other in the US — to assess the properties of the invisible object.

The scientists concluded that the detected system features a black hole with a mass 70 times our Sun that is being orbited by a star that is eight times heavier than our star. This orbit takes 79 days to complete. National Astronomical Observatory of China Professor LIU Jifeng who lead the research team said of the discovery:

Black holes of such mass should not even exist in our Galaxy, according to most of the current models of stellar evolution … they should not leave behind such a massive remnant. LB-1 is twice as massive as what we thought possible.