Smartwatches and fitness device may be the wearables of today, but in the not-too-distant future we be using super-thin skin-like membranes that can put a digital display right on the surface of our bodies. University of Tokyo researchers are bringing us closer to such a future, as they’ve been developing a new type of electronic skin, or e-skin, that is nearly as flexible and stretchy as the real stuff, but has the benefit of putting polymer light emitting diodes (PLEDs) on your hand or anywhere it’s applied.

The e-skin looks like little more than a piece of plastic food wrap that has been stuck to your actual skin. It measures just 3 micrometers thick, and is durable enough to be stretched or crumpled up hundreds of times and still work. 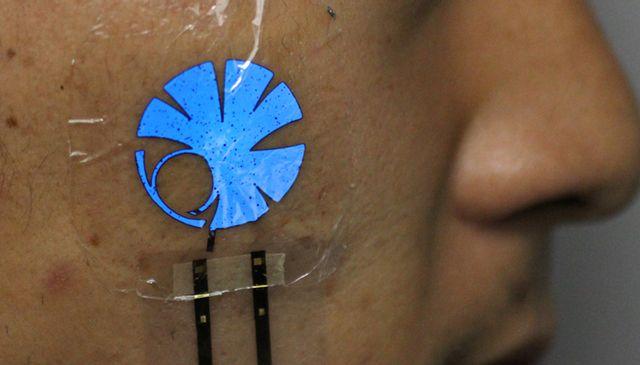 The organic PLEDs created by the researchers are capable of displaying three colors — red, green, and blue — which are activated with electrical pulses.

In its current form, the e-skin is used to display the wearer’s pulse and blood oxygen concentration. The researchers imagine it being used in hospitals, displaying numbers and letters on patients’ hands during surgery. Other possibilities include athletes using it during training, or, in a really advanced case, as a way of displaying diagrams or data directly on the skin, eliminating the need for additional devices.

The other big advancement the researchers have achieved is the ability for their e-skin to continue working for up to several days, thanks to a protective layer that keeps out oxygen and water vapor. This is a problem that has plagued previous e-skin prototypes, which often only last for a few hours once exposed to the body and air.