This Tesla Cybertruck costs only $250

Everybody is familiar with Lego, the building block kit that lets you build pretty much anything and everything you can imagine. Some of the most popular Lego building sets for automotive fans are its complicated Technica building sets that create blocky but realistic versions of popular sports cars. However, many people may not be familiar with similar building sets from Mattel Creations called MEGA.

Certainly, the name Mattel is familiar. It’s the company behind the ever-popular Hot Wheels cars. Mattel Creations MEGA makes kits that look very similar to Lego building blocks, and it has just released a building kit that constructs the Tesla Cybertruck called the MEGA X Cybertruck. The building kit is inspired by the original Tesla design and is complete down to the cracked glass from the infamous Elon Musk reveal incident.

One of the interesting statements that Mattel Creations makes about its Cybertruck building kit is that as users build it brick by brick, it can be customized and reveals hidden features that can only be seen as the kit is being constructed. However, it’s not clear if those hidden features are part of the Tesla design or if MEGA has placed hidden features inside the kit.

MEGA says the designers were obsessed with making the MEGA X Cybertruck as true to the original as possible. The kit has over 3000 pieces, including details such as an exoskeleton, adjustable air suspension, armored glass windows, and additional Easter eggs. For those interested in the building kit, there is a mobile AR experience allowing you to explore the model without even purchasing. 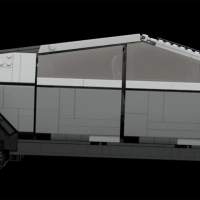 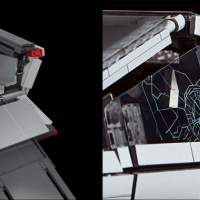 To enjoy the mobile AR experience, users can visit the official page for the Cybertruck building kit here. There is a QR code that can be scanned or a link directly to the AR experience. It’s rather hard to tell how physically large the model is, but with 3000 pieces, it’s likely a good size model.