This robot bird of prey is designed to scare real birds

Unless you look really close, this robot peregrine falcon would almost look like the real thing from a distance, especially while flapping its wings high above the sky. That resemblance to a real avian predator, however faint, might just be enough to scare away other birds that would other wise ruin crops or even endanger human lives.

These robotic birds, or robirds, as they are fondly called, aren’t toys, even though they may look like one. Developed by Clear Flight Solutions, they are design for a very serious purpose, to keep birds away from critical areas. These cover agricultural lands where avians can be as deadly or as troublesome as pests, to airports where a flock of birds can mean life or death for airplane passengers and crew. 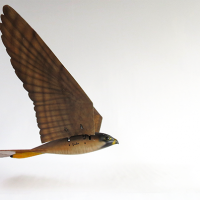 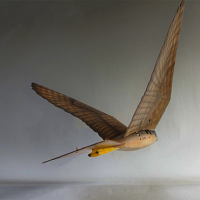 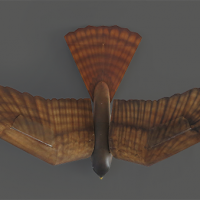 Though obviously fake to humans, especially up close, birds need only see the form and flying motion of the robot to think it is the real thing, and this robird definitely meets those criteria. The peregrine falcon robot has a wing span of 120 cm or 47 inches and can reach speeds of 80 km/h. There is, however, an even more frightening eagle model that reaches 220 cm or 86 in in wing span. That would surely scare off birds away, not to mention some unsuspecting humans, too.

The goal for the robirds is not just to chase away those pesky avians when the circumstances call for it but also to let those birds develop an aversion for certain areas. Clear Flight Solutions estimates that bird problems can drop by as much as 50 percent through prolonged exposure to this fake hunter. At the moment, the robird is remotely controlled, which makes it easier to single out and chase away stubborn birds. Eventually, however, autonomous flight is being eyed for these robots, though that should probably be undertaken with great caution lest this robirds become as big a danger as the birds they are seeking to shoo away.