Drag racing usually involves clouds of burnt hydrocarbons in with the burning rubber, but Chevrolet’s all-electric eCOPO Camaro Concept does away with that. Designed for SEMA 2018, and to mark the fiftieth anniversary of the original COPO Camaro special order models, the EV Camaro isn’t just a vague show-car special, either.

It’s the handiwork of General Motors and Hancock and Lane Racing, which has some prior experience with electric drag racing. Gone is the gas engine of the normal 2019 COPO Camaro, replaced with an electric motor that delivers more than 700 horsepower and 600 lb-ft of torque.

The result is a quarter-mile time in the range of 9 seconds, Chevy estimates, though it’s still doing testing on the car. The drivetrain itself is actually a pair of BorgWarner HVH 250-150 motor assemblies, hooked up to a regular racing-prepared “Turbo 400” automatic transmission. That pushes all of the power to the solid rear axle.

What’s arguably more important, however, is the battery system. The eCOPO Camaro Concept EV gets GM’s first 800-volt battery pack, as the automaker follows in the path of Porsche and others to maximize onboard power. Each battery pack gets four 200-volt modules: they’re split, two in the rear seat area, and the remaining two in the trunk. 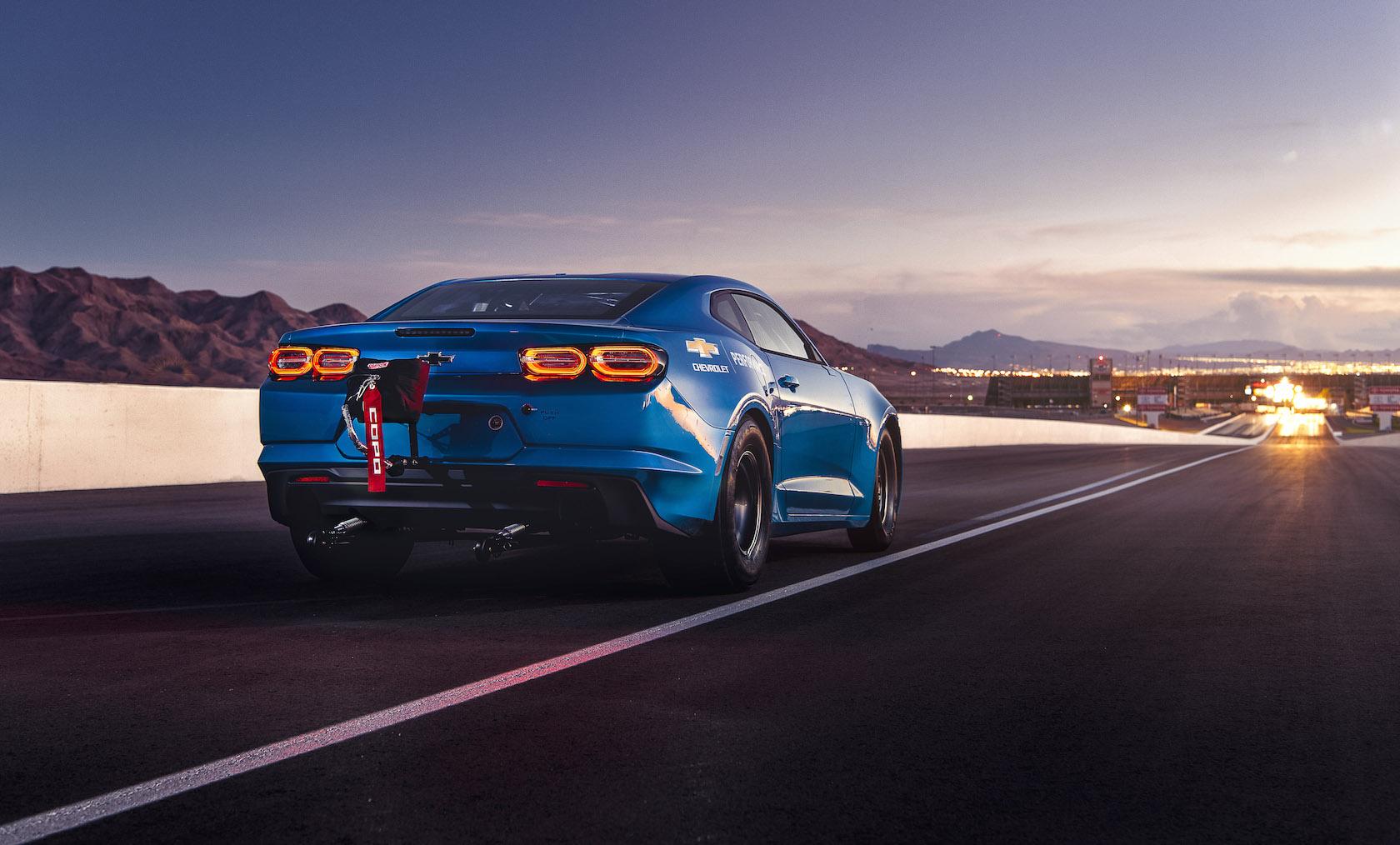 The latter modules are separated so that one is in the spare tire well and the other is mounted over the rear axle. Overall, the eCOPO Camaro pushes more than 56-percent of its weight to the rear. That pays dividends in traction when you’re launching it off a standing start.

“Eight hundred volts is more than twice the voltage of the battery packs in the production Chevrolet Volt and Bolt EV,” Russ O’Blenes, director, Performance Variants, Parts and Motorsports at General Motors, said of the new battery, “so the eCOPO pushes into new technological territory.”

An updated battery management system is responsible for making sure all the voltages and temperatures are in order. For safety, the rear compartment batteries have been sealed off from the rest of the cabin, and there’s a new driveshaft tunnel. The roll cage in the trunk has been built out to also encompass the rear batteries. 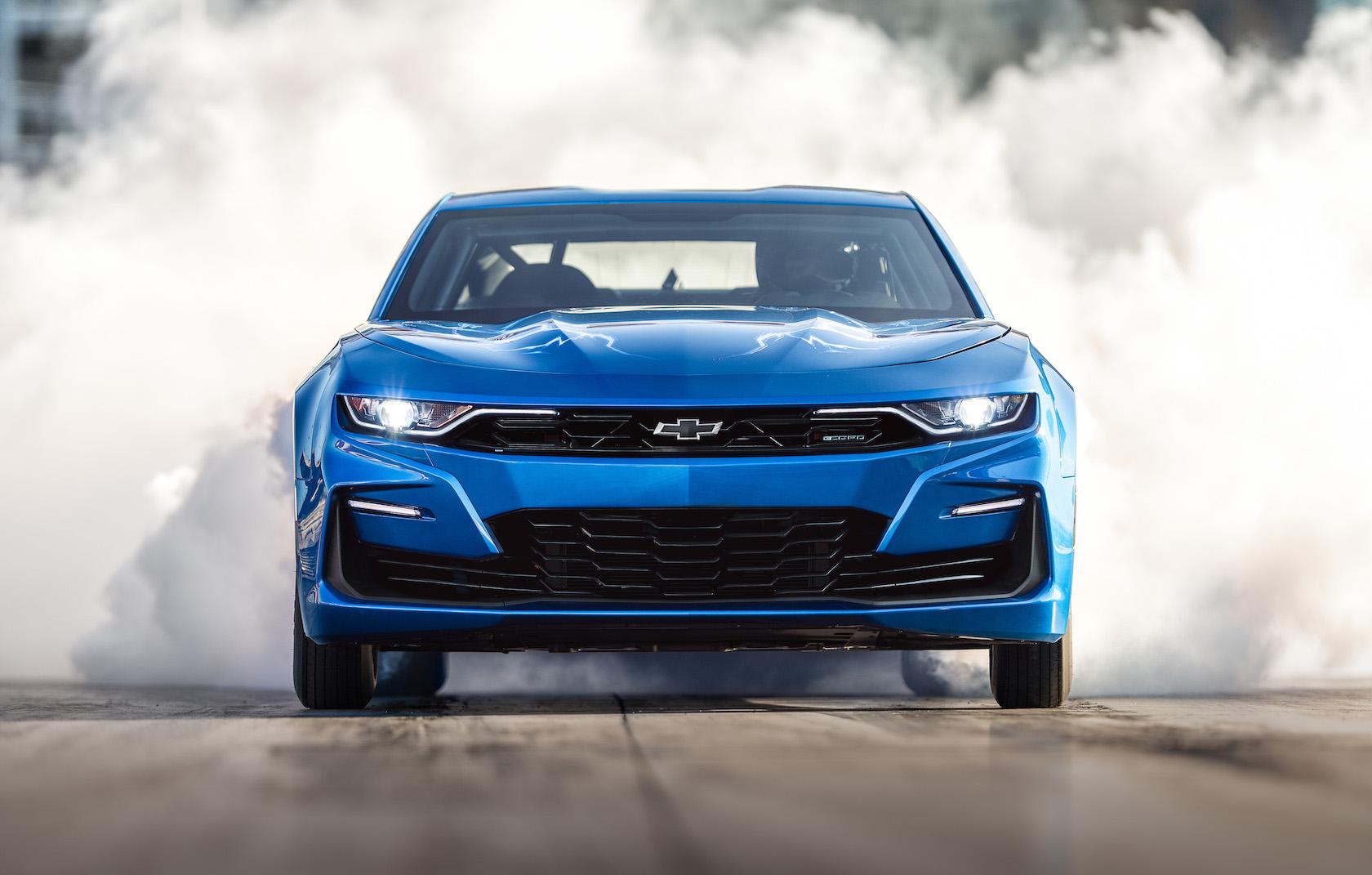 While this show car may be a one-off, the potential for performance electrification is something GM is taking seriously. On the one hand, 800-volt battery technology is likely to be instrumental in production EVs in the years to come, as drivers expect more power and faster charging times.

More exciting, though, is the possibility of new electric crate engines. Chevrolet already offers a broad range of gasoline engines that race car makers and others can use in their builds: now, there’s the chance that it could add electric motors to that line-up. Indeed, the eCOPO Camaro’s drivetrain was designed with that in mind.

For instance, the electric motor has the same bell house mounting pattern and crankshaft flange as the existing LS-family engines. That means it should work with “just about any” of the automaker’s transmissions. As the eCOPO Camaro shows, you can effectively drop in the electric motor as a straight replacement to the gas engine.

“Chevrolet pioneered the concept of the high-performance crate engine right around the time the original COPO Camaro models were created,” O-Blenes points out, “and the eCOPO project points to a future that could include electric crate motors for racing, or even your street rod. We’re not there yet, but it’s something we’re exploring.”