One of the biggest criticisms of all-in-one PCs is the inability to upgrade hardware if necessary. Lenovo has addressed that issue with its ThinkCentre Tiny-in-One 23, an all-in-one monitor with an open slot in the back in which users can slide certain slim Lenovo PCs. Connectors built into the monitor connect to the PC, which can then be accessed through “wings” on the back of the monitor that expose its various ports. Likewise, a couple of USB ports are offered on the front of the monitor for ease of access, ultimately providing a typical AiO experience. Sound interesting? Read our full SlashGear review to find out!

The ThinkCentre M83 is a tiny desktop PC square in shape with ports along both the right and left sides. This PC obviously doesn’t need to be used with the Tiny-in-One 23 if that isn’t desired — users can hook it up to any compatible monitor they might want have around. When coupled with the AiO, however, the system is nestled away from view and integrated with the ports built into the monitor, making for a cleaner desktop and easier transportation from one desk to another. 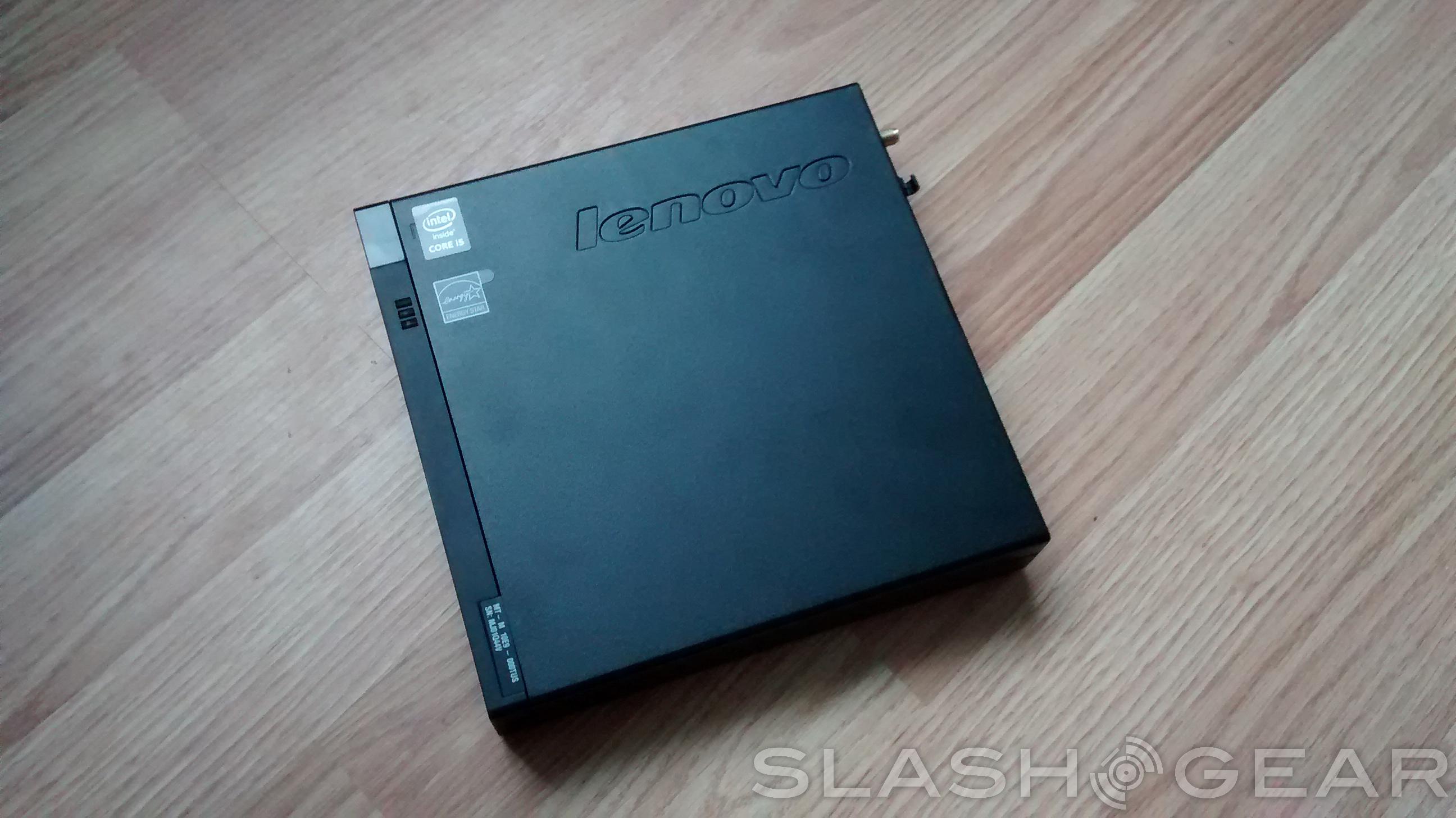 If you’ve used a small form factor PC in the past, you’ll find the M83 Tiny Desktop to be more or less the same. The system brings with it an Intel Core i5-4590T processor alongside Intel HD 4600 graphics, 8GB of RAM, and a 500GB hard drive. The system was shipped with Windows 7 Pro 64-bit. In use, the M83 proved to be both a snappy and relatively silent PC, able to hold up to multi-tasking and relatively intensive processes without hiccups.

Performance is solid, and we experienced no issues in the course of things. The GeekBench results were comparable to some workstations we’ve recently reviewed from Lenovo, though the company does have more powerful options for those who need it. The maker’s W540 workstation, for example, eclipsed the M83’s score, while the tiny desktop has a score more comparable to the Y50 Touch gaming system. 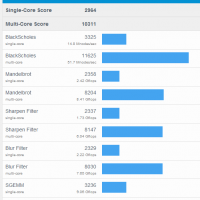 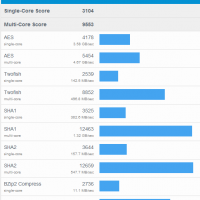 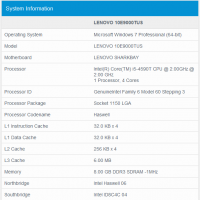 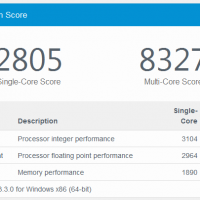 The Tiny-in-One 23 is the attention-getter, giving users more than just a monitor and, given its upgradeable nature, more than an ordinary all-in-one, as well. As you can see in the image below, inserting the tiny PC involves only sliding it down into the slot at the top of the stand on the back. Each “wing” on the side pops open so the ports can be accessed. 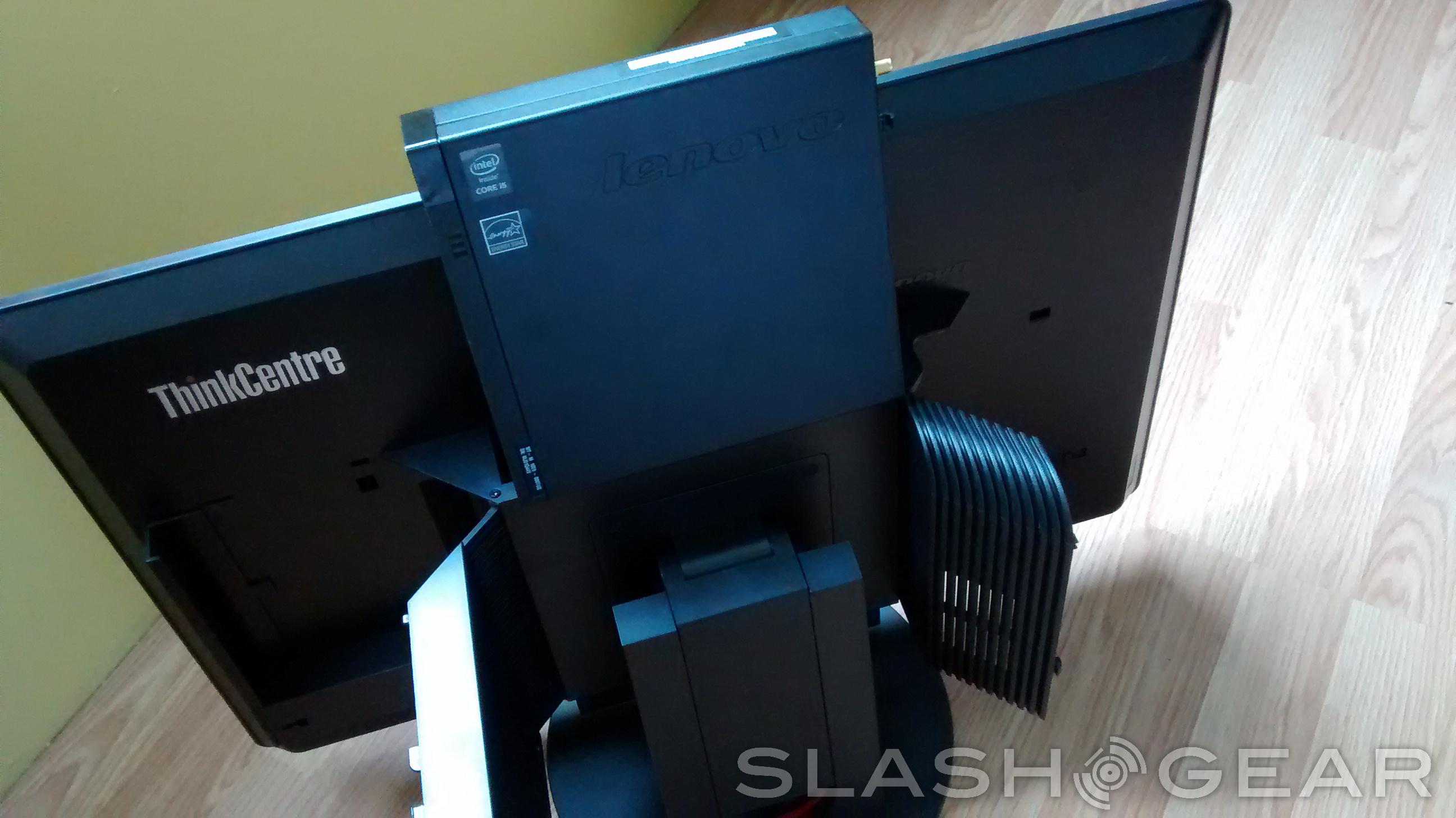 On the right side is a small sliding contraption that includes a power connector and a couple USB ports — this is pulled back to allow the PC to drop fully into place, then released so that it slides into the ports on the PC, which connects it with the Tiny-in-One. A small antenna is screwed into placed, then the wings can be closed. A related power cable is then plugged into the AiO itself rather than the PC, and the keyboard and mouse can be plugged into the USB ports on the front of the monitor. 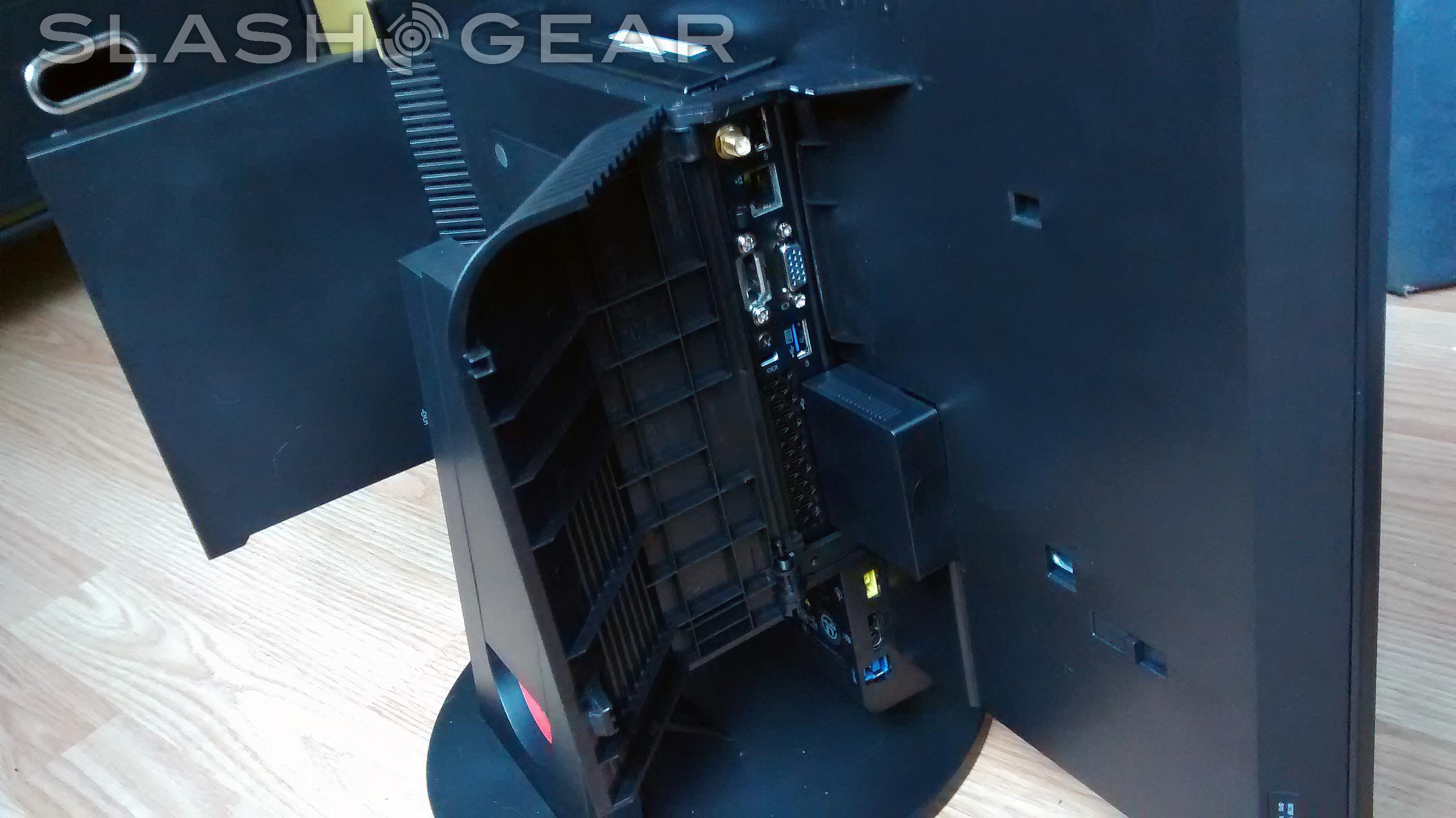 When everything is closed up, the Tiny-in-One looks like any other monitor or AiO system, with nothing obvious pointing to the existence of a detachable computer being nestled in the back. As far as the monitor’s design and construction goes, this ThinkCentre AiO has the same business styling as Lenovo’s Thinkpad notebooks, with large black bezels, a matte display, and large ThinkCentre branding on both the front and back. 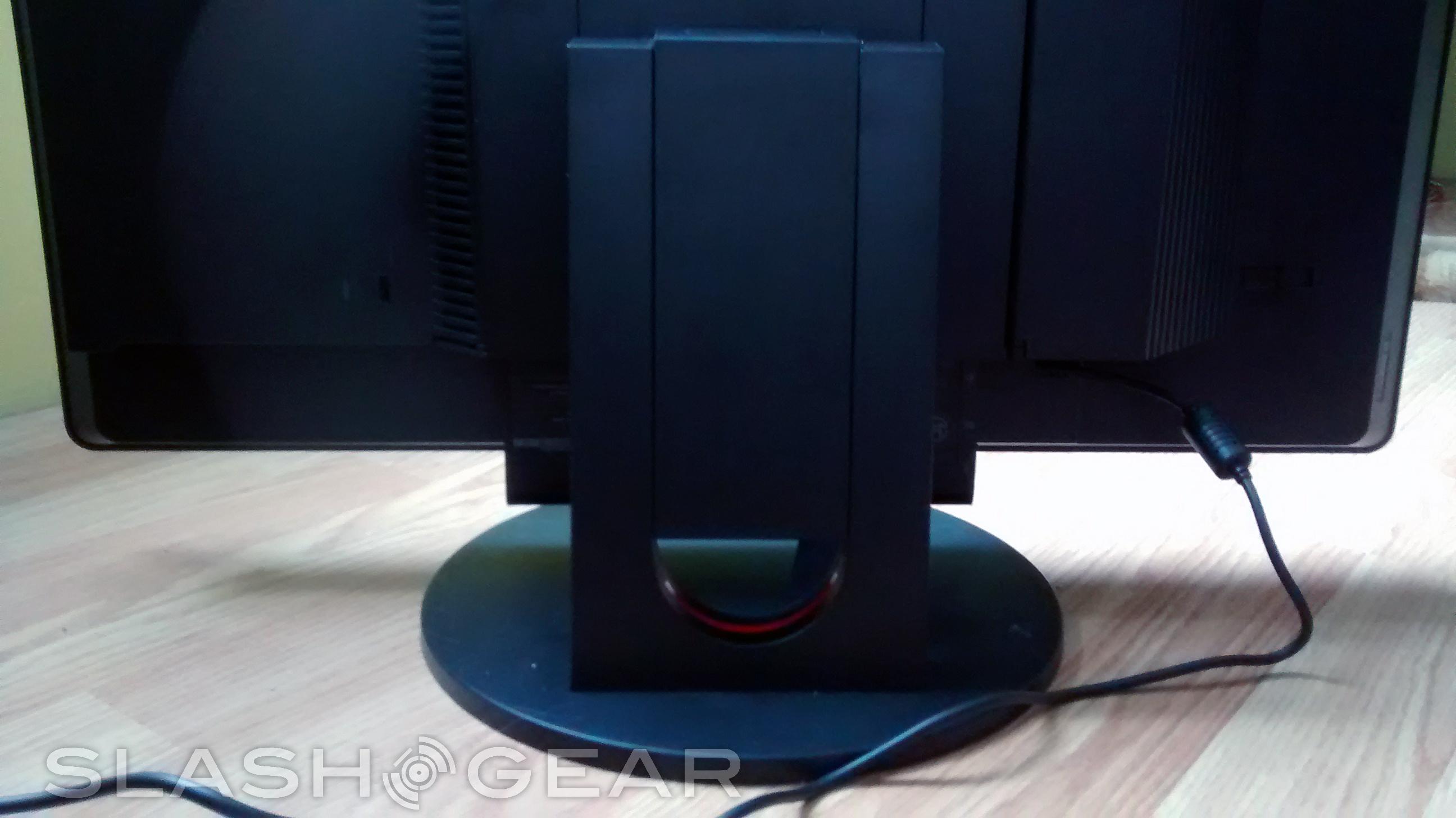 As far as hard specs go, the Tiny-in-One offers a 23-inch display alongside a pair of UBS 3.0 ports, a Kensington Lock, and a DisplayPort. The stand in particular is able to tilt, swivel, and lift.

The Tiny-in-One comes with a keyboard and mouse. The keyboard doesn’t have the common Lenovo keyboard feel, instead having soft keys with a lot of travel akin to other generic desktop keyboards. There are a pair of hinged feet under the keyboard that users can flip up to elevate the device a little bit, and there’s an area on the bottom in which the cable can be tucked to keep it from becoming damaged. 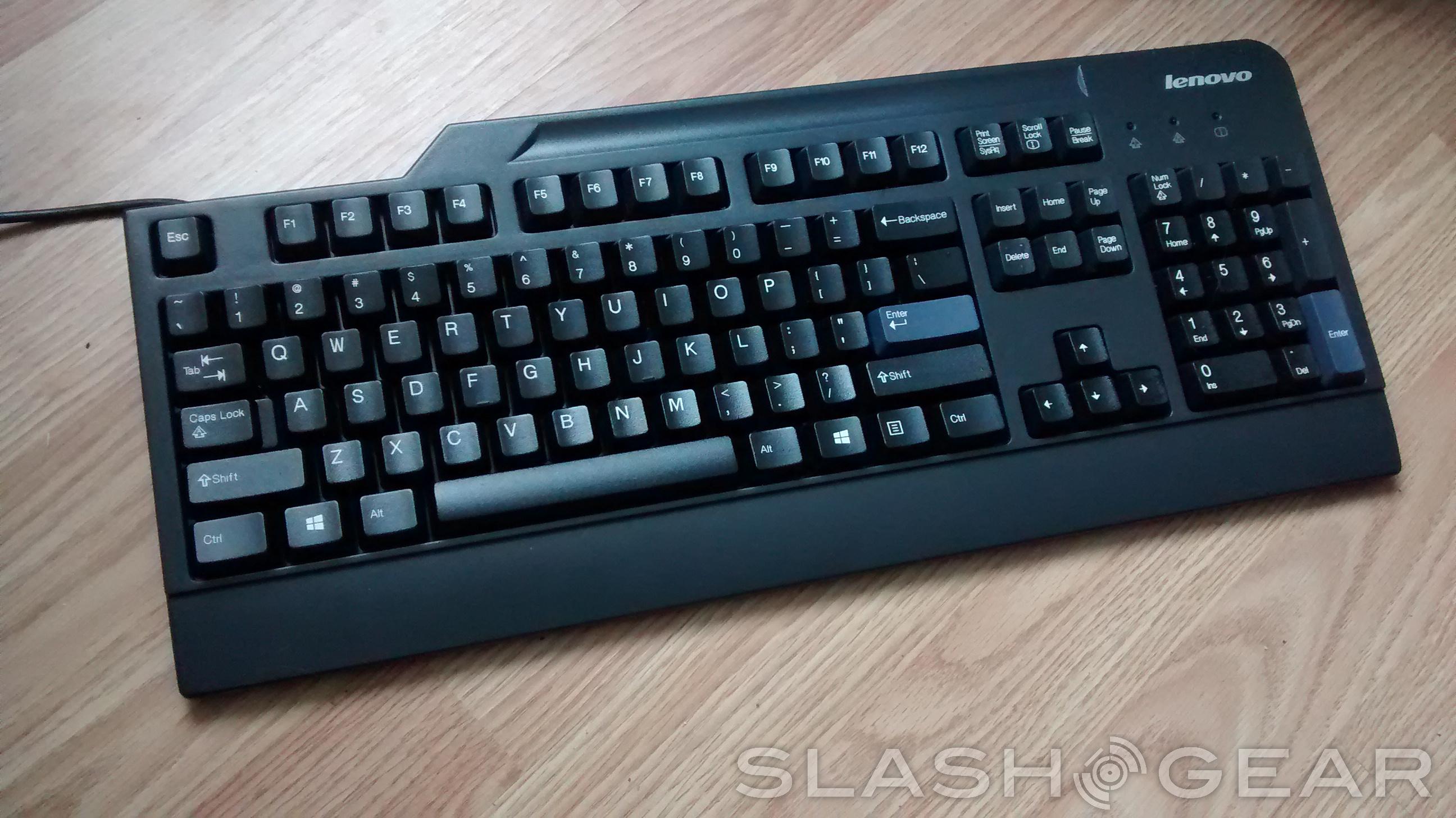 The mouse, meanwhile, is likewise a generic peripheral with a USB cable and textured plastic construction. There’s Lenovo branding on the rear, as well as a red dial and a couple of buttons. 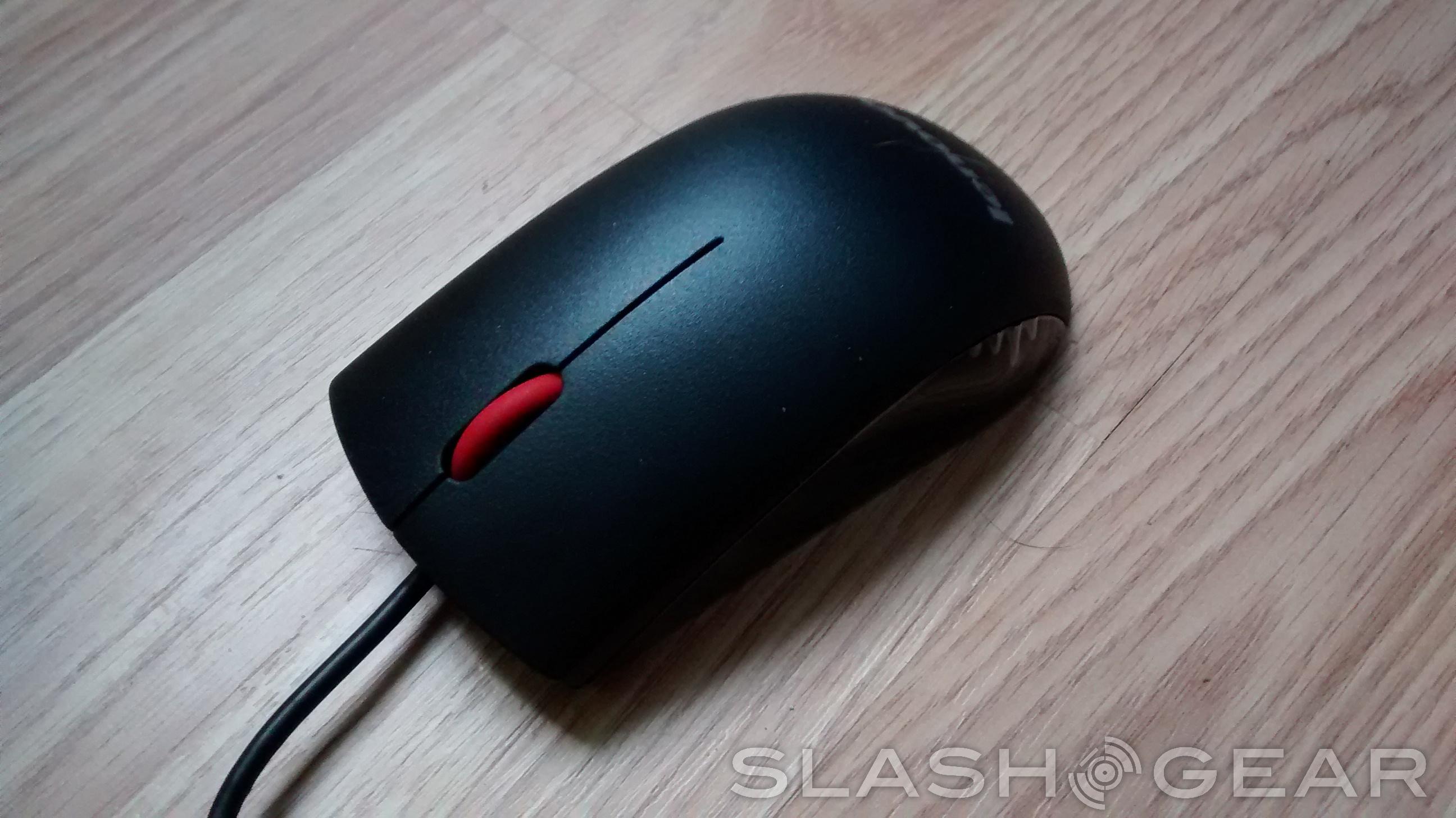 The Tiny-in-One system is a unique way to enjoy the clutter-free features of an all-in-one system while maintaining an element of customization. There is a bit of down time initially when setting the entire system up, but nothing was complex and the only issue we ran into was getting the slider on the back of the Tiny-in-One to slide properly into the M83’s ports. Once that was in place, however, the rest was as easy as screwing in an antenna, plugging in the peripherals, and then powering on the system.

Topics All in oneComputingDesktopLenovoPC
Must Read Bits & Bytes