These batteries could last forever

This week researchers at MIT and Samsung have revealed a new approach to batteries, paving the way for “rechargeable batteries with almost indefinite lifetimes.” MIT suggests that the electrolyte is the key to this next-generation solution to longer-lasting batteries is in a solid electrolyte instead of liquid, liquid being the element used in most common rechargeable batteries today. This new solution could also make the next generation of batteries safer, too, reducing the chance of explosions and harmful chemical leaks.

One of the biggest limitations in today’s common lithium-ion batteries is limited electrochemical stability. Flammability is also a big negative in the world of the lithium-ion battery. Neither of these features is quite bad enough to stop manufacturers from using these batteries in most of the world’s most-purchased mobile devices, of course – but that doesn’t mean researchers are going to stop looking for better solutions.

Enter Yan Wang et all., working to create a safer and longer-lasting battery. If what these researchers have created means what they suggest it means, we could be on the verge of batteries that can be charged, emptied, and charged again almost indefinitely.

This might not mean much to the lay person, but for the researchers looking for just such a solution, one that produces high ionic conductivity in the environment they’d aimed for, it means a far better battery.

While the solutions found thus far do not mean a better battery will be produced in the near future, this research does indicate great potential. With a deeper understanding of iconic transport along lithium-ion conductors comes a brighter future for lithium-ion batteries in general. 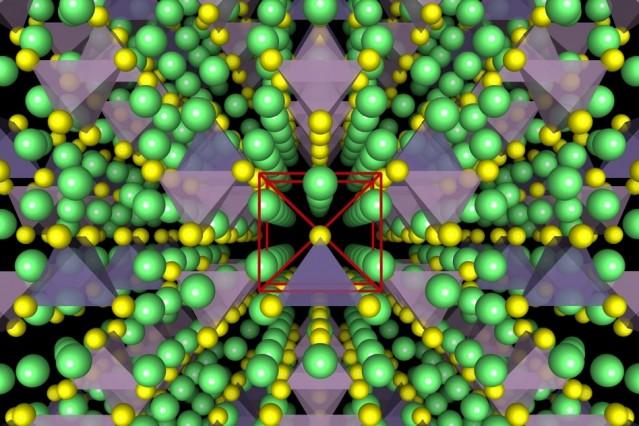 ABOVE: VIA MIT and Yan Wang, Illustrations show the crystal structure of a superionic conductor. The backbone of the material is a body-centred cubic-like arrangement of sulphur anions. Lithium atoms are depicted in green, sulfur atoms in yellow, PS4 tetrahedra in purple, and GeS4 tetrahedra in blue. Researchers have revealed the fundamental relationship between anion packing and ionic transport in fast lithium-conducting materials.