Mention Psion among geeks of a certain age and you’re likely to trigger a lengthy conversation about how they had – or coveted – one of the company’s iconic Series 3 or Series 5 PDAs in the 90s. Known for their innovative QWERTY keyboard design and futuristic – for the time – functionality, you arguably couldn’t call yourself a proper mobile enthusiast if you didn’t own one at some point. So, you’d be forgiven for the briefest, misty-eyed reminiscimoment at the news today that Motorola Solutions is buying up the company in a $200m deal. Problem is, the wrong Motorola bought Psion.

The Psion of today doesn’t make consumer PDAs. Instead it focuses on industrial devices, such as the sort of ruggedized handhelds that your delivery driver might ask you to sign, or which a mobile repairman might use to track jobs and report back to base. Motorola Solutions – the non-consumer half of Motorola, after it was split up in 2011 – plans to merge the Psion expertise with its own enterprise division.

What’s not quite clear is who controls the particularly special patents on some of the elements that made the Psion PDAs so great. Designed by Martin Riddiford – now of Therefore design consultants – and variously assigned to him and to Psion, the filings covered the hinged sliding/folding mechanism, the form-factor which prevented the PDA from toppling back even if touched near the top of the display, and the tactile keyboard used in the Series 5 and other designs. 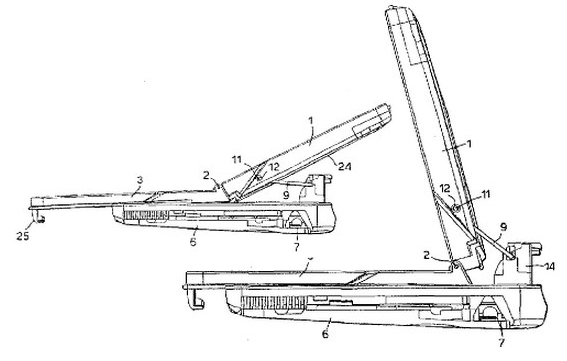 It’s those designs that I’d most like to see show up on the market again, and I can’t help but wish that it was Motorola Mobility – itself in the process of being gobbled up by Google – that had showed an interest in Psion, not its enterprise-obsessed cousin. They may be old – the hinge patent was granted back in the late-90s – but there’s nothing on the market which has quite the same imaginative use of space.

In one particularly cruel moment, I was even shown images of a prototype third-party design that borrowed the hinge and keyboard mechanism but which ran Android on a modern processor, though was unable to share them. It’s not clear if this was the same project as the PsiXpda Android MID we reported on back in June 2011, but either way the trail has gone cold.

Given Google’s interest in pushing both Chrome OS and Android, and Motorola Mobility’s experiments with the Lapdock form-factor, all of that coalescing with the Psion keyboard and form-factor could’ve made for a very tempting device that stood out from the rest of the tablet/phone ecosystem. It seems, though, that such a product is unlikely to be found in the next chapter of the Psion story.