The Villainess motorcycle fight scene: Here’s how they did it

Over the weekend I had a look at a trailer/clip from the movie “The Villainess”, AKA “AK-NYEO”. This clip featured a motorcycle chase and fight that seems to feature camera work that was beyond the skill of the average human being. Without a frame-by-frame examination of this clip, it seemed like either a ghost caught hold of a camera, or someone had drone skills that bordered on superhuman.

NOTE: This scene was released as a teaser / trailer for the the film. The film had an August 25, 2017 USA release date (or September 15th, depending on who you ask). The Villainess is 124 minutes long and is rated R.

“I tried capturing supposedly impossible action scenes using cameras that are smaller than the ones commonly used,” said director Jung Byung-gil in an interview this May, 2017 via YonHap News. “I believe I produced something quite new in terms of motorcycle action scenes.”

“During the action scenes I use a lot of handheld rigs,” said Jung in a separate interview with Birth Movies Death. “The cameramen used the cameras along with the actors, so that the audience feels like the camera and the actor are the same thing. This makes a dynamic effect.”

“Rather than depending on a specific technology, I wanted it to feel like real life, through using the handheld cameras. For each scene the feeling is different. Sometimes the camera trembles more, sometimes less.”

The following analyzation is not done in collaboration with the filmmakers and/or any official connected with the movie. As such, I may well have made a mistake or two. To the best of my ability, this is how this scene was filmed, cut, and sewn back together. 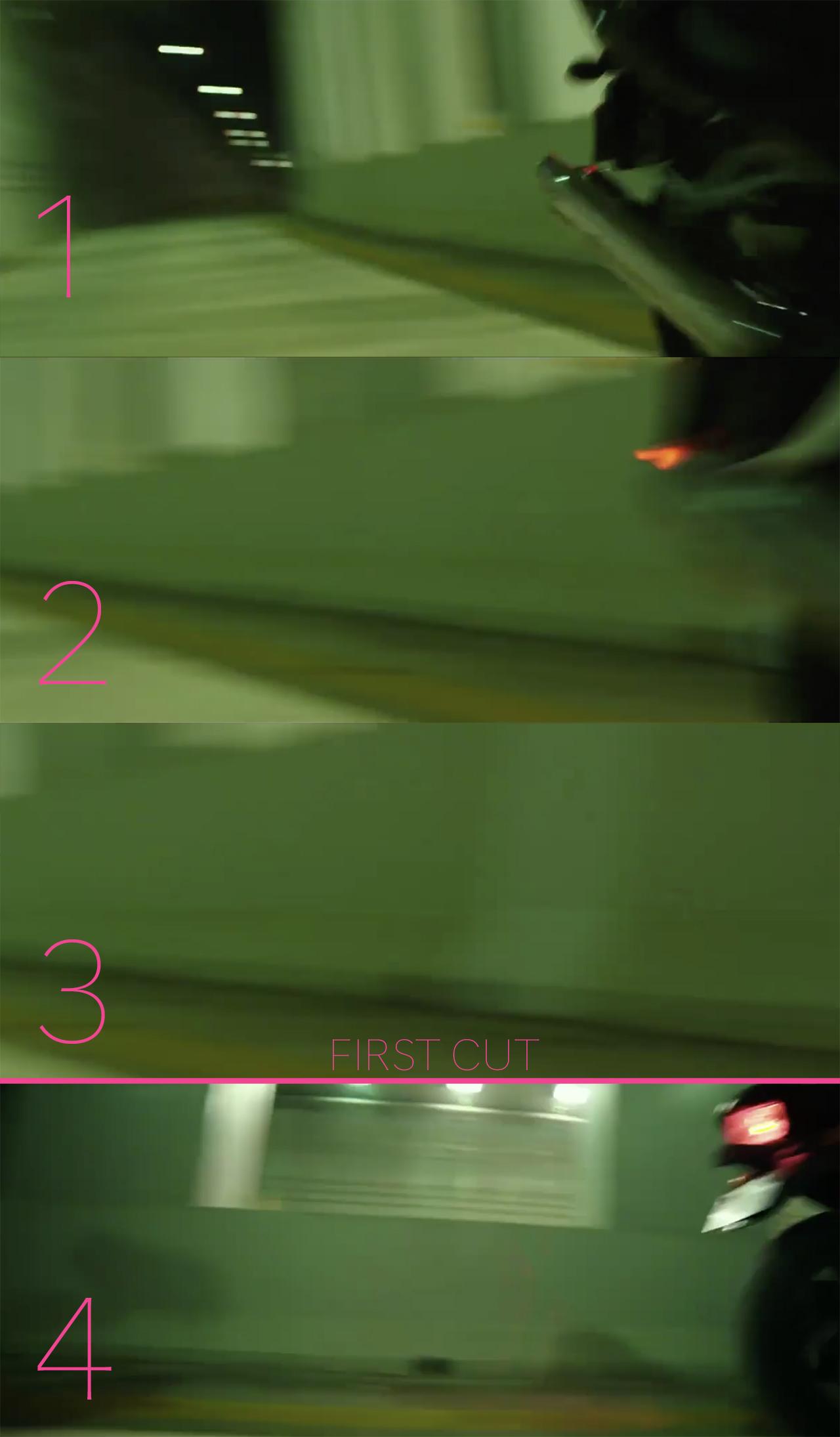 At this point in the clip, three motorcycles are held together by a rig. The rig is attached to the back of a moving vehicle. It might ALSO be that this rig is actually stationary and against a green-screen. This is evidenced by the relative lack of movement of the lights in the helmet of the rider on our right-side (on the middle rider’s left) – but it may just look like no movement is happening because of our relative position to the lights.

At 0:30 there’s a FOURTH CUT which allows the biker on our left (middle biker’s right) to be removed from the rig. Detached from the rig, this motorcycle is shown crashing into the wall. This segment is filmed from the rig with the two remaining motorcycles.

The 38-41 scene is likely one of the only scenes filmed with motorcycles and riders attached to the rig as it’s driving. Little fighting action here means a bit safer experience for the riders – and the camera focuses on a 4th rider, coming up to replace the left rider (center rider’s right). 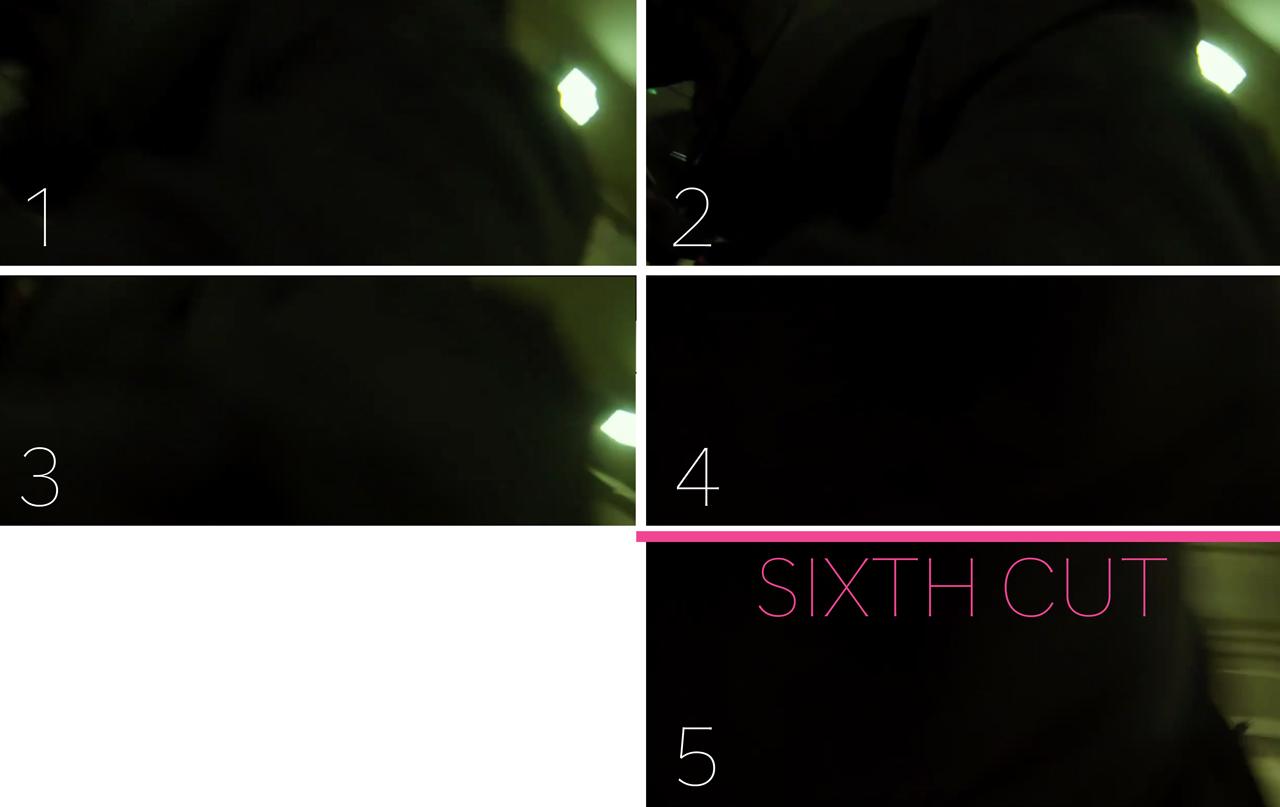 SIXTH CUT AT LEFT ARM OF RIGHT-SIDE RIDER
14. From 0:41 to 0:45 Hand-held camera, all three riders once again attached to the rig. There’s a pan back to the front of all three riders at this point.

15. From 0:45 to 0:46 there seems to be a little bit of post-editing going on with the front wheels of the motorcycle trio. Without going through frame-by-frame, it’s impossible to see, but the wheels jump a frame or two independent of the rest of the motorcycles, and all at the same time. I’m guessing this was edited frame-by-frame to remove any hints of the rig that would otherwise be visible here. 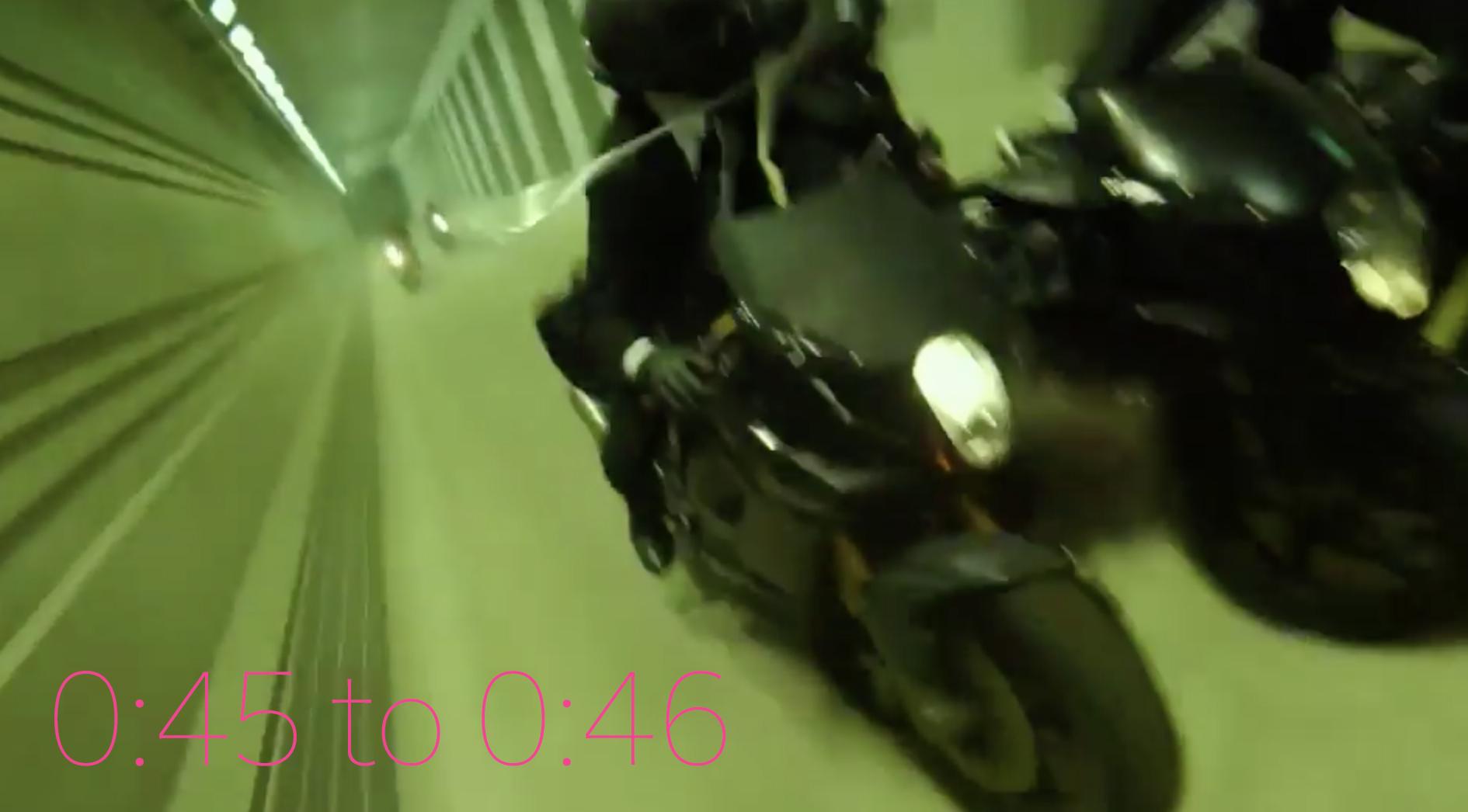 16. From 0:47 to 0:54 is an impressively long sequence which I believe is all one shot, filmed with a hand-held cam from the rig.
SEVENTH CUT (not sure exactly where!)
17. Somewhere around 0:53 and 0:54 there’s a cut to allow the rightmost biker (middle biker’s left) to be detached from the rig.
18. At 0:54 is a completely digital sword being jammed into the motorcycle’s tire – sparks!
EIGHTH CUT AS SPARKS END 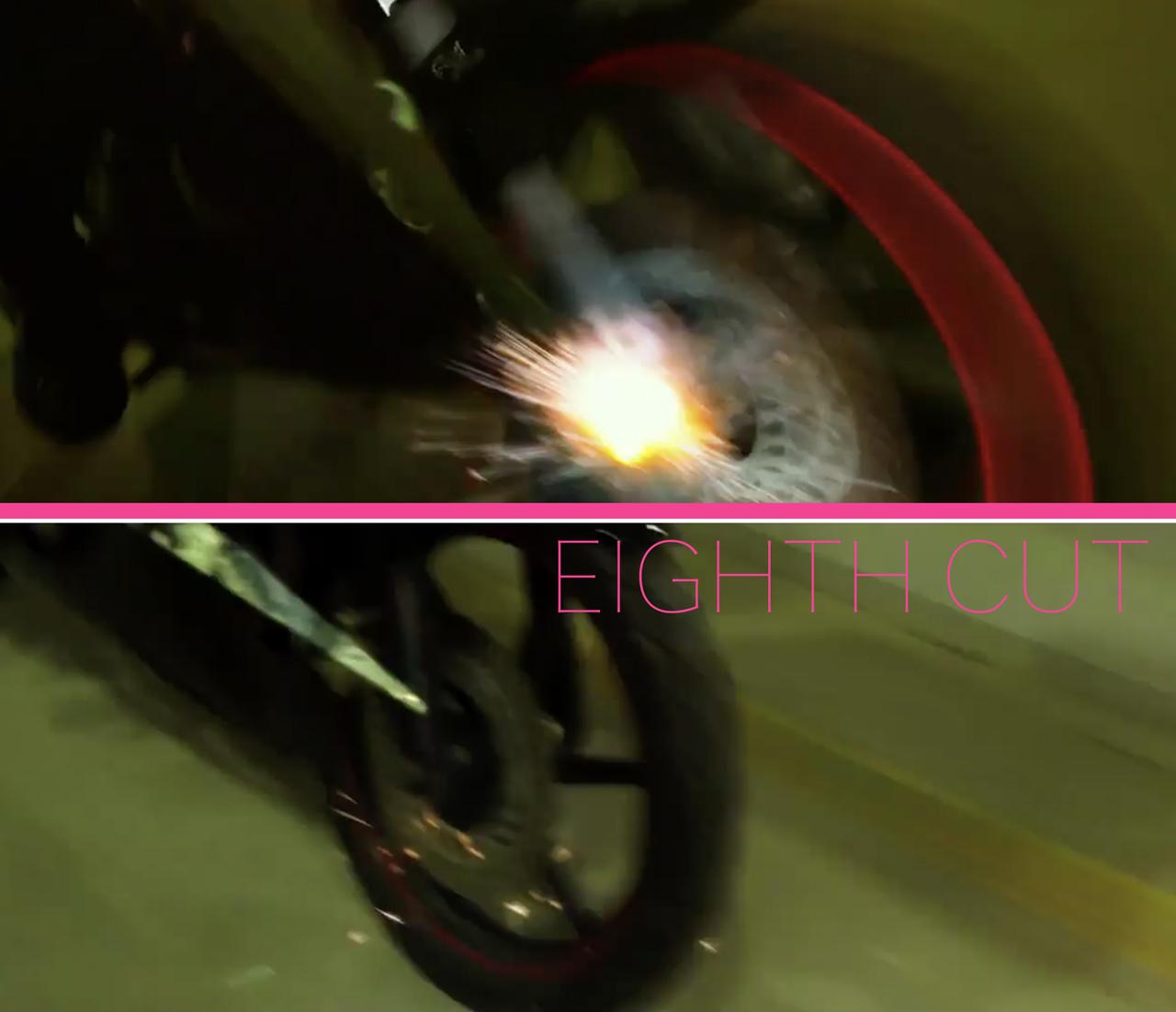 This is just the beginning of a new age in creative action filmmaking. Watch out for a litany of action film copycats in the near future. This is the new Matrix.

Stay tuned for more information on this movie regarding release and distribution. UPDATE: At this moment the movie is only out as a limited release in New York and Los Angeles – good luck finding it!