From the moment I got to the airport, and was handed the keys to a brand new Audi RS7 Performance, I knew this was no ordinary media drive program. This drool-worthy beast is now powered by a massive 605 HP, 553 lb-ft. of torque engine; for those keeping score, that’s 85 more horsepower than the standard V8, and an additional 73 lb-ft available via overboost. It certainly set the tone for what was to be an unforgettable few days leading to Rolex 24 at Daytona.

When I arrived, it had just rained hard in Miami – that torrential downpour continued into the second day, making the Rolex 24 qualifying a skid-happy spectacle – so I was understandably cautious the first couple miles, particularly given the RS7 Performance was fitted with summer tires. Resistance is futile, though, especially when the exhaust-note’s roaring began to speak to me, and I couldn’t help but let her out to play, counting on quattro all-wheel-drive and Audi’s other electronics to save me should I slip a little here or there. 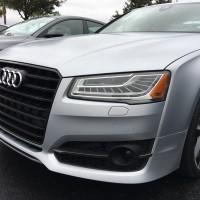 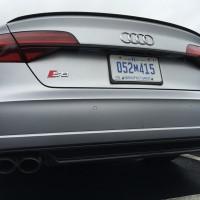 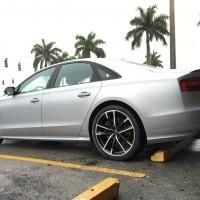 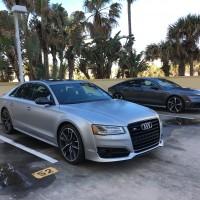 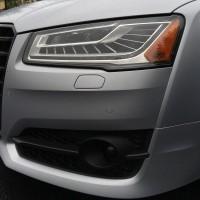 The fun carried over to the next day, when we began our drive from Miami to Daytona. My drive partner and I decided to start our with the S8 Plus, a more aggressive version of the flagship luxury sedan that’s also a beneficiary of the new 605 HP engine, sport-tuned suspension, carbon ceramic brakes, and all the other goodies that comes with being an Audi. Now the S8 is appealing, but our cunning trick here was to end up with the car we really wanted to drive on the Daytona International Speedway. The S8 Plus does a sterling job mixing luxe and sport, but the RS7 Performance was built from the ground up to be at home on the track.

In all it was an eight-hour endurance run to Daytona in the S8 Plus. The car replaces the S8 as the base model for 2016, priced at $115,825; with the new engine and optional Dynamic Package, the total price climbs to $125,000. That’s about $5k short of the $129,925 RS 7 Performance, but brings the sedan surprisingly close as spec goes, with its carbon rear spoiler, sport exhaust system, ceramic brakes, and gray brake calipers. Standard features such as adaptive sport air suspension, 21-inch wheels with 275/35 tires, a gloss-black diffuser insert and grille, matte black honeycombed side air inlets and radiator screen, body-colored matching rear spoiler and rearview mirror, and titanium wheels help set the Plus apart from the regular A8.

On the second leg of the drive, we switched back into the RS 7 Performance and – just as we’d schemed – this would be the vehicle we’d keep for the remained of the trip. I’ve had my fun with the RS7 on a number of occasions, not least when I got to race against Audi’s first- and second-gen autonomous RS7s so by now I pretty much know my way around this car. 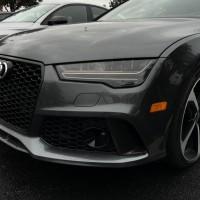 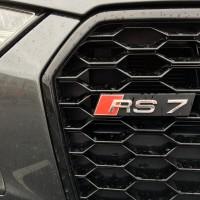 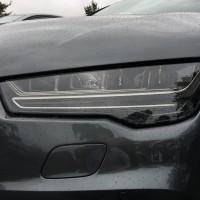 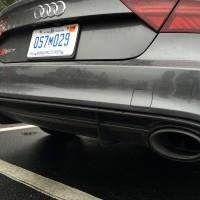 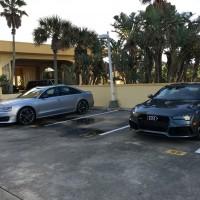 That meant, during the long drive to Daytona and my time on the track, I could put a lot of thought into what it takes to be a racecar driver in an endurance race, walking away with a huge amount of respect for these amazing athletes.

It’d be easy to focus solely on the improvements around the new engine in the S8 Plus and RS7 Performance. Both sedans share the same, 4.0-liter turbo V8 paired with an 8-speed Tiptronic transmission, the S8 plus has a top speed of 155 mph, which can be unlocked to match the RS7 Performance’s 190 mph with the optional Dynamic package.

We’re talking supercar level abilities, here: 0-60 in takes roughly 3.6-seconds in the RS7 Performance – add an extra 0.1 second for the S8 Plus. While that’s impressive but probably not especially applicable on regular roads, on a proper race track quick acceleration makes a world of difference, particularly one with a significant bank.

Daytona International Speedway has the second steepest bank – Talladega beats it by just 2 more degrees – at a perception-warping 31-degrees in the oval turns and 18-degrees in the tri-oval. Banking is all about minimizing lateral slip, while using the car’s downforce and velocity to whip it around the corner. As the car rockets through the turn, your body starts to sink deeper and deeper into the seat, a sensation you won’t ever get driving on public streets. The best example I can think of is the swing ride at a fairground, only instead of going round and round, the car is fired out like a rock from a slingshot down toward the straightaway.

That’s the theory, anyway. I was headed out without the luxury of even a practice lap, and the best advice I got from Audi was first to make sure to turn “into the bank”, and second, to drive fast. The latter might seem like common sense, but it’s actually vitally important you get the speed right: otherwise, the tail end of the car will slide down the bank and that’ll cause all sorts of rear-end damage.

Now you see why that 0-60 performance is so important, since when you’re coming out of a super-tight hairpin like Daytona’s International Horseshoe there’s little distance between the exit and the entrance up to the bank. It’s crucial to properly set up the turn: brake in the straight line, turn in, hit the apex, turn out, and then slam on the gas as hard as you can. Picking up enough momentum from 60 mph to 120+ mph in order to whip around the bank is nerve-racking, especially when it’s your first time.

Turns out, exiting the banks is just as thrilling – if not more – than turning in. Now, if you’re doing it properly, your exit speed should be consistent or greater through the turn, which straightens out for a distance before you need to put the carbon ceramic brakes to use. I, however, had no idea where to start stopping… the 3, 2, 1 brake signs were placed high up on the wall. By the time I spotted them, I was well past 140 mph. Ominously, Audi told me that if you haven’t started braking by the time you reach number 2, things can go very wrong. Unsurprisingly that got me looking early for the signs andplanning my approach for the “bus stop”, which is more like a yellow signal light telling you to slow down and proceed with caution. Afterwards, there’s another stretch before the second bank, and then an abrupt slowing into the pit.

For all their power, the RS7 Performance and the S8 Plus are both heavier sedans, not really intended to be driven on a demanding racetrack. That being said, they’re going to understeer to some degree, especially with novice drivers. I happened to miss the apex on a tight turn and understeered, but luckily the standard-fit quattro AWD – combined with the torque-vectoring rear diff – kicked in to save my rear, quite literally. Then it’s a case of giving it more gas and trusting that the system will deliver the torque in an effective way, which happily the RS7 Performance did. 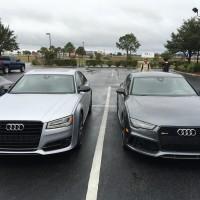 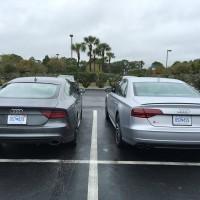 Since it’s rare to drive at the upper end of the speed limit (150+), low to midrange performance needs to deliver too. On and off the track, the RS7 Performance excelled beyond my expectations, speeding from turn to turn with quick, short spurts of straight driving in-between. Out in the real world, if you don’t manage your lead foot you probably won’t keep your license for long.

If money wasn’t a factor, in my dream garage I’d have both: the S8 Plus as my daily driver, and a cheeky RS7 Performance to spend the weekend with at the track. Pressed to pick just one of the two, the RS7 Performance is more my style with its more aggressive edge. That does mean it’s rougher than the S8 Plus on poor road surfaces, and if your primary requirement is a luxury car with serious performance, then the S8 Plus is for you. We drove for hours from Miami to Daytona, in rain and shine, and while the road was pretty flat, the drive was rarely dull. 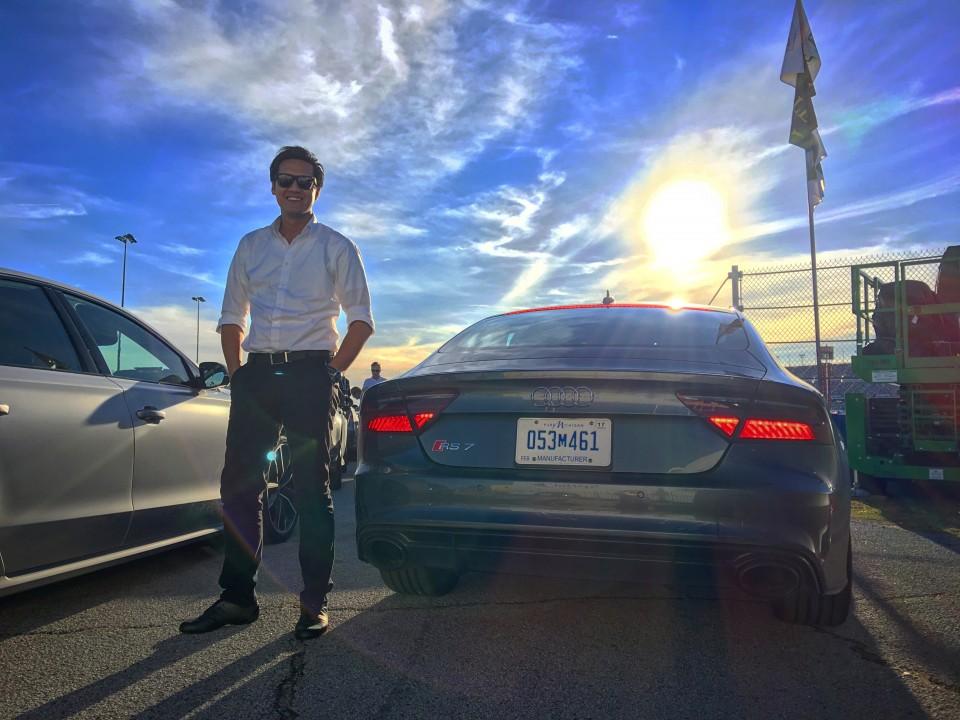 I brought my A-game on this drive because I had one shot at driving Daytona Speedway. The team at Audi and Magnus Racing clearly did too, taking first place in the Rolex 24 GTD class while still taking the time to give me advice on how to make the most of my time on the track. At the end of the race, though, I could comfortably drive either the RS7 Performance or the S8 Plus back to the airport, not something you could say about their GT Daytona cars, and what helps make the Audi pair more than capable of taking on the competition from Mercedes-Benz’s AMG and BMW’s M divisions. 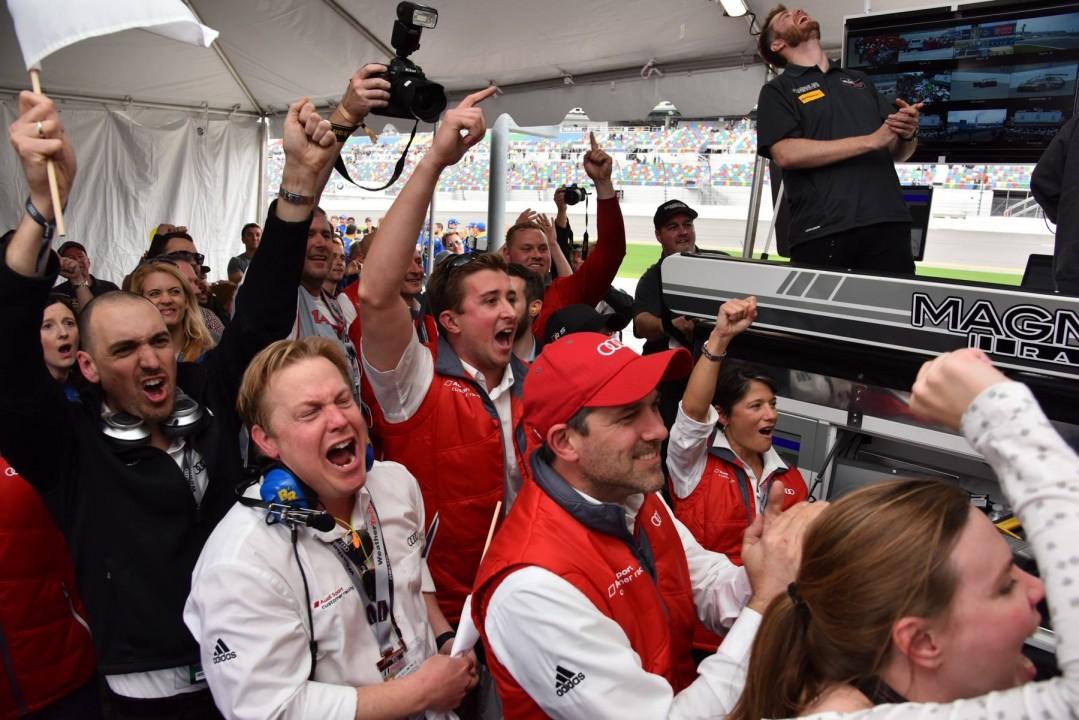