The number of American homes without a TV is growing

The number of homes in the U.S. that don’t have at least one television is growing, according to the U.S. Energy Information Administration. According to a study it published earlier this year, which looked at television trends in the US from 1997 to 2015, US households experienced a sudden decrease in TV ownership between 2009 and 2015, the reasons for which likely have a lot to do with mobile phones and tablets.

Whereas a television was your only option for at-home video-based entertainment, times have changed and that is no longer the case. While a television has to be shared with others, a smartphone or tablet is a personal device, enabling users to watch videos anywhere — in bed, in the car, in a waiting room. 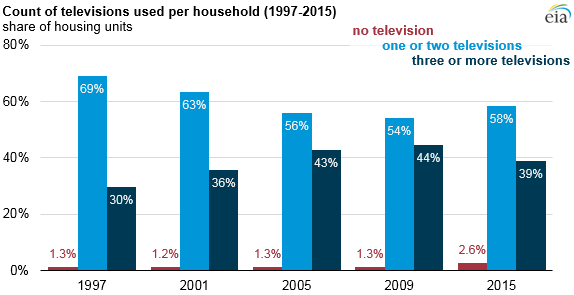 According to the ‘Residential Energy Consumption Survey,’ which looked at the number of TVs in US homes, the number of homes without any television remained nearly perfectly steady between 1997 and 2009, staying at 1.3% across the board with the exception of 2001, when the number briefly dipped to 1.2%. Things changed in a big way between 2009 and 2015, though, with the figure jumping from 1.3% in 2009 to 2.6% in 2015.

It’s easy to see how phones are more appealing than televisions. Unless someone enjoys playing console video games, smartphones and tablets provide easy access to video content…and vast quantities of other entertaining content that TV has to compete with. Whether this drop in television ownership is due to less TV consumption or just a preference for different devices is unclear.