The “Need to Know” on Chevrolet’s 2016 Volt engine

Chevrolet may have made the 2016 Volt sleeker and more comfortable than its predecessor, but the important changes start under the hood. The second-generation Voltec powertrain might follow the same pattern as its predecessor, but upgrades on both the gas and electric components – as well as how they work together – add up to a considerably different experience from the new EV.

GM’s theory behind the powertrain is that electrification alone – while it has its advantages in vehicles primarily intended to be city cars, like the Spark EV – isn’t necessarily right for every driver. Instead, the Volt is a hybrid, though it doesn’t use its gas and electric motors in the same way as, say, Toyota’s Prius would.

In the Volt, the gasoline engine is only used primarily as a last-resort. The electric motors are expected to be used most frequently on a day-to-day basis, rated for around 53 miles of range. Should the batteries run flat, however, the 1.5L SIDI engine starts up – almost imperceptibly – to act as a “range extender”.

That actually means two tasks for the gas engine. First, it acts as a portable generator to recharge the Volt’s battery pack, so that you can get back to electric-only driving without having to wait until you can plug in somewhere.

Secondly, though, it will actively drive the wheels, like a traditional gasoline car. The original Volt only relied on that on relatively rare occasions: while both generations of car have two motors, the first Volt dedicated one to generator duty, and the other to drive, feeding in engine torque through a special transaxle on rare occasions such as during prolonged highway speeds.

In the new Volt, though, both motors can be used for drive if the hybrid’s brain thinks that’s necessary. Torque from the gas engine is used more frequently, too, with engine speed and the proportion sent to the generator adjusted depending on how fast the driver wants to go, and what sort of hills or other more challenging terrain is being tackled.

The result is more flexibility in the power on tap, not to mention better range: up from the 380 miles of the original to 420 miles from a full battery and a full tank of gas. That gas should be cheaper, too, since the 2016 Volt can handle regular fuel whereas its predecessor demanded premium. 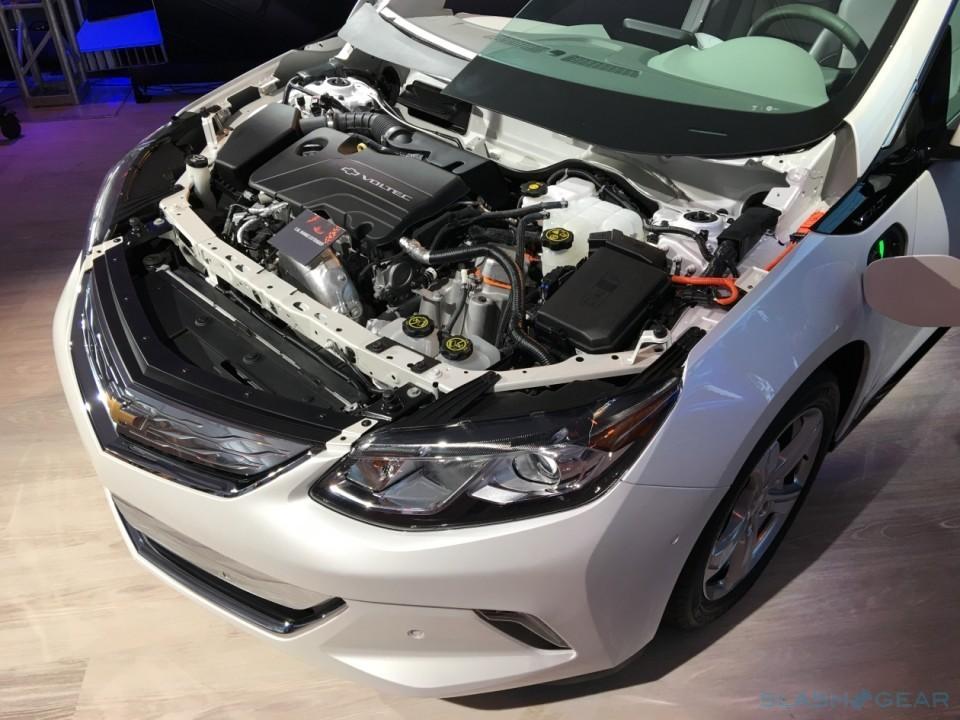 Despite the more capable traditional engine, GM’s engineers expect that even more journeys in the new Volt will be done on electric alone. According to Pam Fletcher, executive chief engineer of electrified vehicles at GM, more than 80-percent of trips in the first Volt are all-EV, but that’s expected to climb to around 90-percent in the new car.

Meanwhile, Fletcher told me, the battery pack is the same size, but over 20 pounds lighter despite having 20-percent larger cell energy storage. That’s meant Chevy could squeeze in a smaller number of bigger cells – 192 versus 288 – for more capacity.

In our own testing, the 2016 Volt managed 59 miles before the range extender engine kicked in.

The new Volt is on sale now, with dealerships in California already receiving cars, and availability in ten other states this year. The rest of the US is scheduled to get the car in 2016.