Semi-autonomous automotive tech has infiltrated a host of modern cars, but the luxury segment sees more than its fair share of systems designed to do as much of the driving for you as is legally possible. Unfortunately, when you pick up the keys to your new car or truck, there’s very seldom any information provided about how and when you should use any of these features – let alone a discussion of situations where it might be dangerous to rely on them.

It’s a frustrating state of affairs as we begin the slow, and ultimately drawn out transition from the status quo to a distant future where legitimate self-driving cars are commonplace. In the meantime, we’re dealing with a host of competing technologies, opaque functionality, and a variety of user interfaces that aren’t always adequate when it comes to communicating what’s actually happening when you push that button on the dashboard.

The 2017 Volvo S90 offers an interesting look at how semi-autonomous drive modes can be both a blessing and a curse – especially when it’s not always clear why, how, or when they are working. Volvo has poured significant effort into its active safety technologies, and was one of the first automakers to pioneer detection and automatic braking for pedestrians and wildlife. It current safety offerings have evolved to the point where the brand sits at the cutting edge of what can be ordered with a modern luxury car.

I happen to live in Montreal, Quebec, and during the winter months we get a fair amount of terrible weather, usually in the form of snow, ice, and sleet. It can make driving an adventure for human beings, and almost impossible for computers dependent on sensor systems that are easily blinded by road grime, salt, and heavy precipitation. Into this environment steps Pilot Assist II, the latest self-driving gear outfitted to the S90 sedan and XC90 SUV. Pilot Assist II moves past the now-common adaptive cruise control concept by also offering steering inputs. Loosely translated, that means that properly-equipped Volvos can follow along behind traffic ahead by monitoring the speed and position of other cars around them as well as the lines on the road, automatically steering to stay in the proper lane and constantly adjusting the brake and throttle down to a complete stop if necessary. 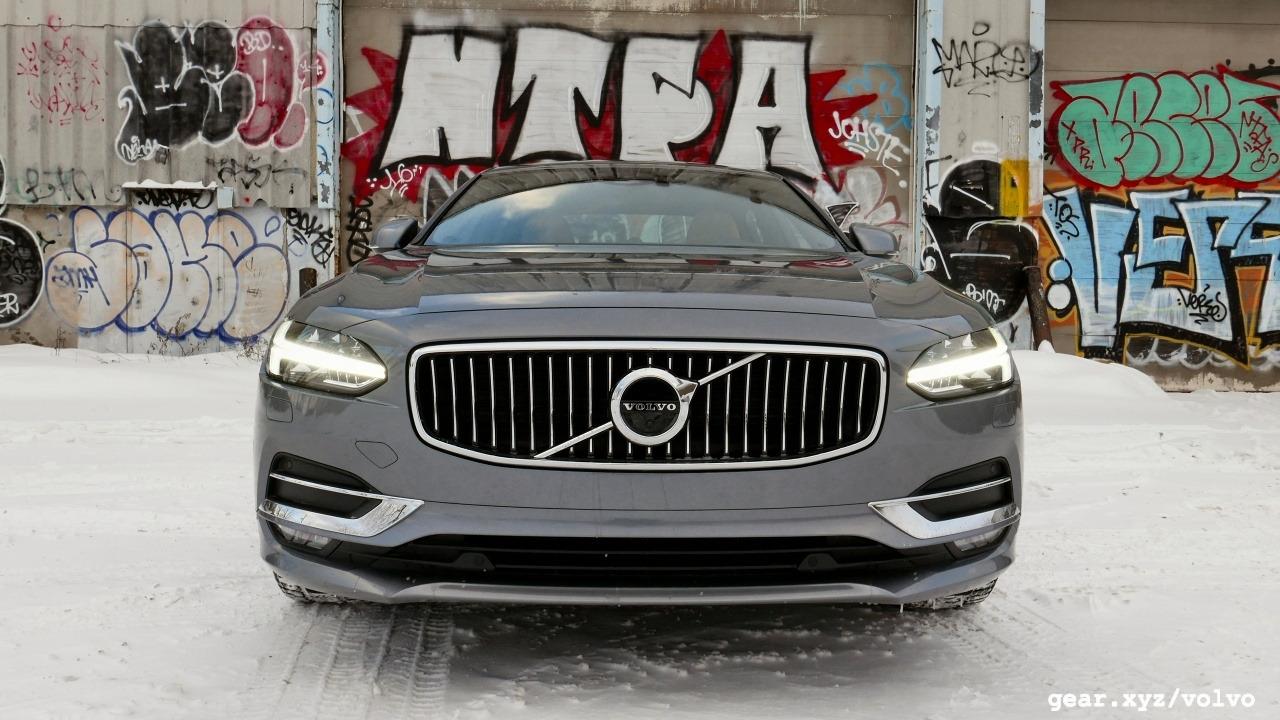 Although I had previously experienced the similar setup in the Volvo XC90, the first time I tried Pilot Assist II in the S90 sedan was during bumper-to-bumper low-speed traffic in one of Montreal’s clogged central arteries. This gave me the chance to get used to the system at a speed safe enough to observe it in action and get used to how it operates. With my camera person filming, Pilot Assist II worked well enough that it kept pace with the vehicle in front of it and only asked for occasional steering inputs (to reassure the system I was still alive), as well as the need to hit the gas pedal after it had been stopped for a specific amount of time to get rolling again. The latter is standard behavior for many adaptive cruise control systems on the market.

As you can see in the video, however, it’s not entirely clear how the system works, when it’s working, or what you need to do to operate it correctly. Being able to turn it on with the touch of a single button is great, but the fact that I didn’t immediately understand what the steering icon on the dashboard was telling what to do is problematic. Does green mean the system is turned on? Does grey mean it’s turned off? Actually, the answer is neither of these: when the icon is displayed, the system has been ‘activated,’ but it’s not ‘active’ unless that same icon is glowing green. This is why the steering wheel image switched to grey after I had been stopped long enough for it to go into what Volvo calls ‘standby mode.’ To get out of standby, you either tap the gas or hit the + button on the steering wheel where the cruise control functionality lives, and the car resumes its follow-along.

You’ll also notice in the video that Pilot Assist II occasionally goes into standby mode while the vehicle is actually in motion, too. That has to do with the sensors that are guiding the car being unable to identify the lane markings on the road, and it’s something I had to deal with far more extensively when attempting to use the system during more inclement weather conditions.

It must be stressed that this behavior is in no way demonstrative of a fault with the Volvo safety system. It’s performing according to how it was designed, and it is reacting to the situation around it within those parameters.

This video shows Pilot Assist II in action a few days later. It’s nighttime, it’s snowing and sleeting fairly heavily, and there’s a decent amount of snow already on the road. The system is handling these conditions quite well. Volvo has designed it to work at speeds of up to 80-mph, so my highway jaunt is well within its parameters, and the rain isn’t obscuring the camera system or affecting the speed radar in any way.

After about 20 minutes on the road, however, problems began to appear. Initially, the cameras had no issue picking up the lane markings on the highway, but once I got into snowier conditions where the shoulder was almost entirely covered in white stuff, it was a different story. It’s interesting to note that it wasn’t actually snowing at the time, but rather the accumulation of snow from earlier that was causing the issue. Pilot Assist II began to engage and disengage on a regular basis – or, in Volvo-speak, go into standby – as its cameras were no longer able to keep up with where the lane began and ended.

This was problematic, because there’s really no warning when Pilot Assist II enters standby aside from the graying of the icon at the bottom left of the gauge cluster. As before in the low-speed traffic situation, you not only have to understand what the transition from green to grey means, but you also have to keep one eye off the road and watching the dash to know whether you’re going to get steering assistance or not. This is far from ideal, as one should never be uncertain as to whether a semi-autonomous feature is functioning or not.

The interface waters are muddied even further by the fact that the radar-controlled cruise functionality isn’t impacted by Pilot Assist II going into standby, which meant that the car I was driving maintained its speed at all times. This poses a serious question: how can vehicle designers alert drivers as to which parts of an autonomous system are decoupled from others, and how can they make them understand what aspects of it will keep working when one function has turned itself off? 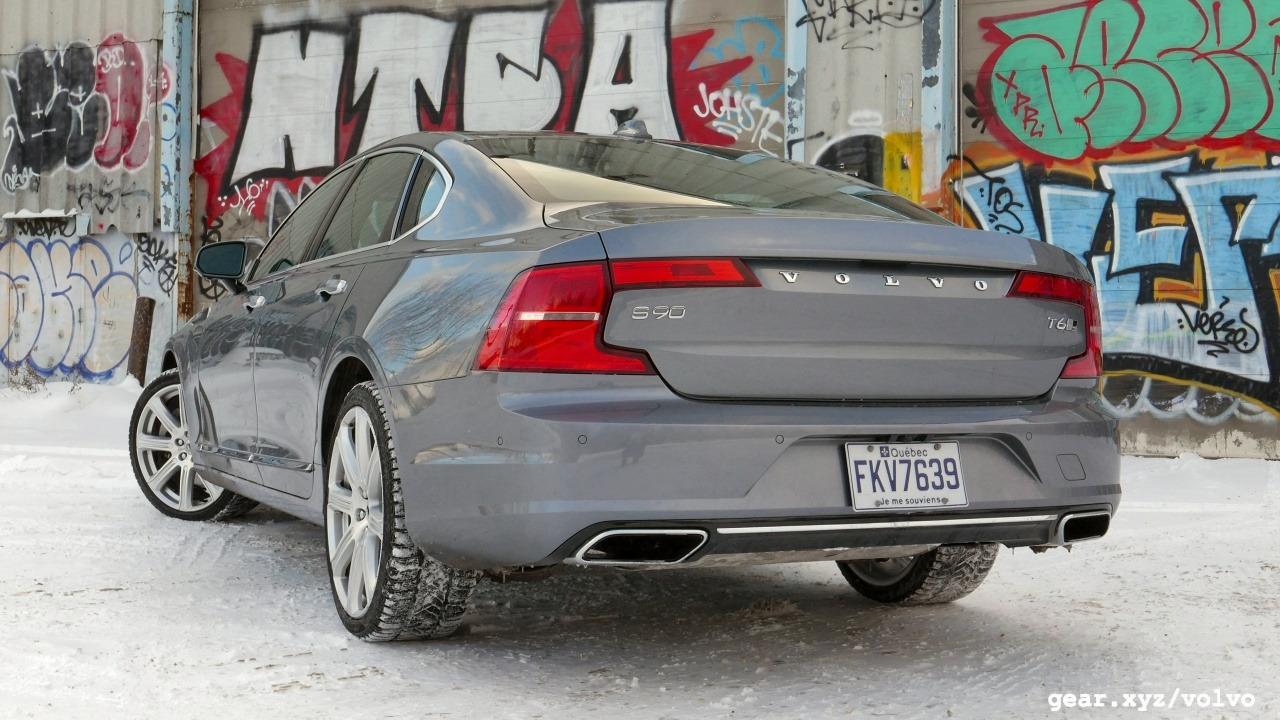 In the Volvo S90, there was no clear answer. The only real indication I was given that Pilot Assist II was cycling on and off (aside from the icon) was by the way the steering would abruptly push away from the side of the lane when it reactivated itself after detecting a visible white line again. This eventually lead to me pushing back against the car’s steering inputs, and eventually I shut down the system entirely.

Ideally, as I noted in the videos, autonomous driving functionality would save us from the driving conditions that are the most dangerous to be out in – blizzards, heavy rainstorms, and slippery surfaces. In fact, these are scenarios where current sensor technology is at its weakest in terms of protecting the safety of vehicle occupants. Self-steering systems are largely fair-weather technologies, yet this is not always communicated in marketing materials or at buying time when customers are given brief explanations of their vehicle’s active safety equipment (if any is provided at all). To its credit, Volvo publishes a disclaimer for Pilot Assist II that states “Do not use Pilot Assist in demanding driving conditions such as city driving or other heavy traffic situations, in slippery conditions, when there is a great deal of water or slush on the road, during heavy rain or snow, in poor visibility, on winding roads or on highway ramps.” This would seem to cover situations where the cameras might be impaired, when surrounding vehicles might pose a larger threat by way of unpredictable behavior, and when traction is low and hydroplaning a possibility.

It’s clear that the company is aware of the limitations inherent in the system. Yet Volvo, a leader in the semi-autonomous field, is still struggling with how to adequately bridge the gap between self-driving functionality, ideal versus challenging road conditions, and keeping human drivers in the loop at all times. There are other automakers that offer similar features but lag behind the S90 when it comes to dealing with difficult weather, electing to simply turn off completely rather than selectively activate and deactivate over the course of a given journey. The autonomous future is still far ahead of us, but until then we’re going to have to deal with the shortcomings and quirks of existing semi-autonomous driving systems, and think long and hard about how and where improvements can be made.