Taking high-resolution photos of your neighbors is usually frowned upon, but not when the neighbor in question is the Andromeda galaxy and the camera is the Hubble Space Telescope. NASA has shared the sharpest large composite image ever taken of the sprawling mass of stars, space dust, and more, a vast 1.5 billion pixels that together cover a 61,000 light year long section of the galaxy. It’s a shot that gets more and more involving even as you zoom in closer, but NASA is hoping that it will do more than just amaze people.

Instead, the hope is that they’ll provoke more research based on the surfeit of high-resolution photographs that Hubble is producing. This particular Andromeda photo is actually the result of combining a total of more than sixteen hours of exposures and multiple resulting frames into one single shot.

It’s also the first time that astronomers will be able to make out individual stars over a significant section of an external spiral galaxy, the Hubble team points out. 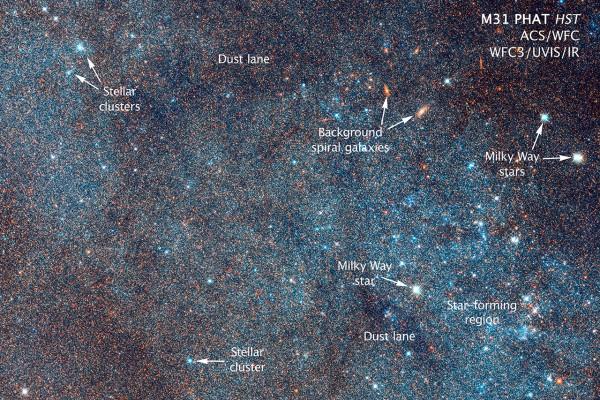 While the result may be pretty attractive to look at, it took a little work to get to that point. Several of Hubble’s filters were used to sample across broad wavelength ranges, and then different hues were assigned to different monochromatic images associated with individual filters.

Andromeda may be a relatively close neighbor in astronomical terms, but it’s still more than two million light years away from us. The Hubble team compares its picture to “photographing a beach and resolving individual grains of sand.”

That makes actually enjoying it on-screen a pretty tricky prospect, though this video does at least give some context of quite how much detail there is involved.