The EU fined Google $5bn and Trump is furious

Yesterday, the European Commission hit Google with a record-breaking $5 billion fine for antitrust violations. There are actually a few different angles to the Commission’s complaint, but to boil it down, it essentially claimed that Google used Android to cement its search dominance. Google, obviously, argued against the fine and announced its intent to appeal the ruling, and today the company finds itself with an unlikely ally: President Trump.

Just a couple of hours ago, Trump took to Twitter to state his disapproval of the fine. “I told you so! The European Union just slapped a Five Billion Dollar fine on one of our great companies, Google,” the President wrote. “They truly have taken advantage of the U.S., but not for long!”

How President Trump would stop the European Commission from fining companies that are found to be breaking EU law is unclear. Just to recap, the Commission’s complaint is that by bundling apps like Chrome and Google Search with must-have apps like the Google Play Store, Google has used Android as a platform to shut out competition from other search companies attempting to break into the space. 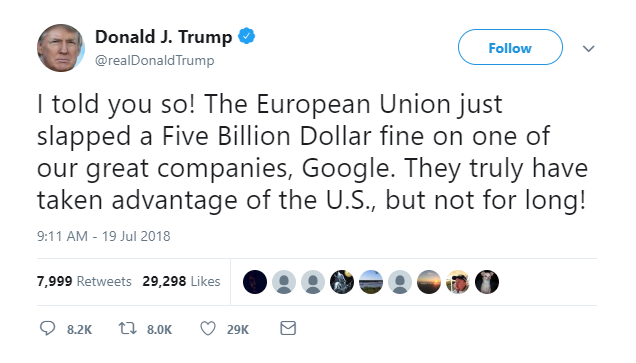 The Commission also took issue with Google’s former practice of paying manufacturers and carriers to exclusively use its suite of apps across their entire Android lineup. Finally, the Commission claimed that Google was preventing Android manufacturers from developing custom versions of the operating system or selling phones that use them, making it even harder for competitors to gain a foothold.

In the end, the Commission found that Google violated EU antitrust laws and has given the company 90 days to clean up its act. Google, on the other hand, claims that it has actually cultivated consumer choice instead of restricting it, and that it will appeal the ruling. We’ll see where things go from here, so stay tuned.