The big tech behind the 2017 Acura NSX specs

Never has there been a supercar as relentlessly cutting-edge, as deliberately modern, as the 2017 Acura NSX. Picking up the torch passed on from the original NSX of the 90s means more than just a nameplate and that legendary Honda reliability: it’s also about embracing the very latest in powertrain, handling, and hybridization. Complicated stuff: here’s what you need to know for your next geeky dinner party.

On paper, the 2017 NSX is a mid-engined car. Lift the rear hatch, indeed, and you’ll see it, a 3.5 liter V6 with twin turbos lurking just behind the seats. Yet somehow, the Honda and Acura engineers have managed to squeeze in another three engines. 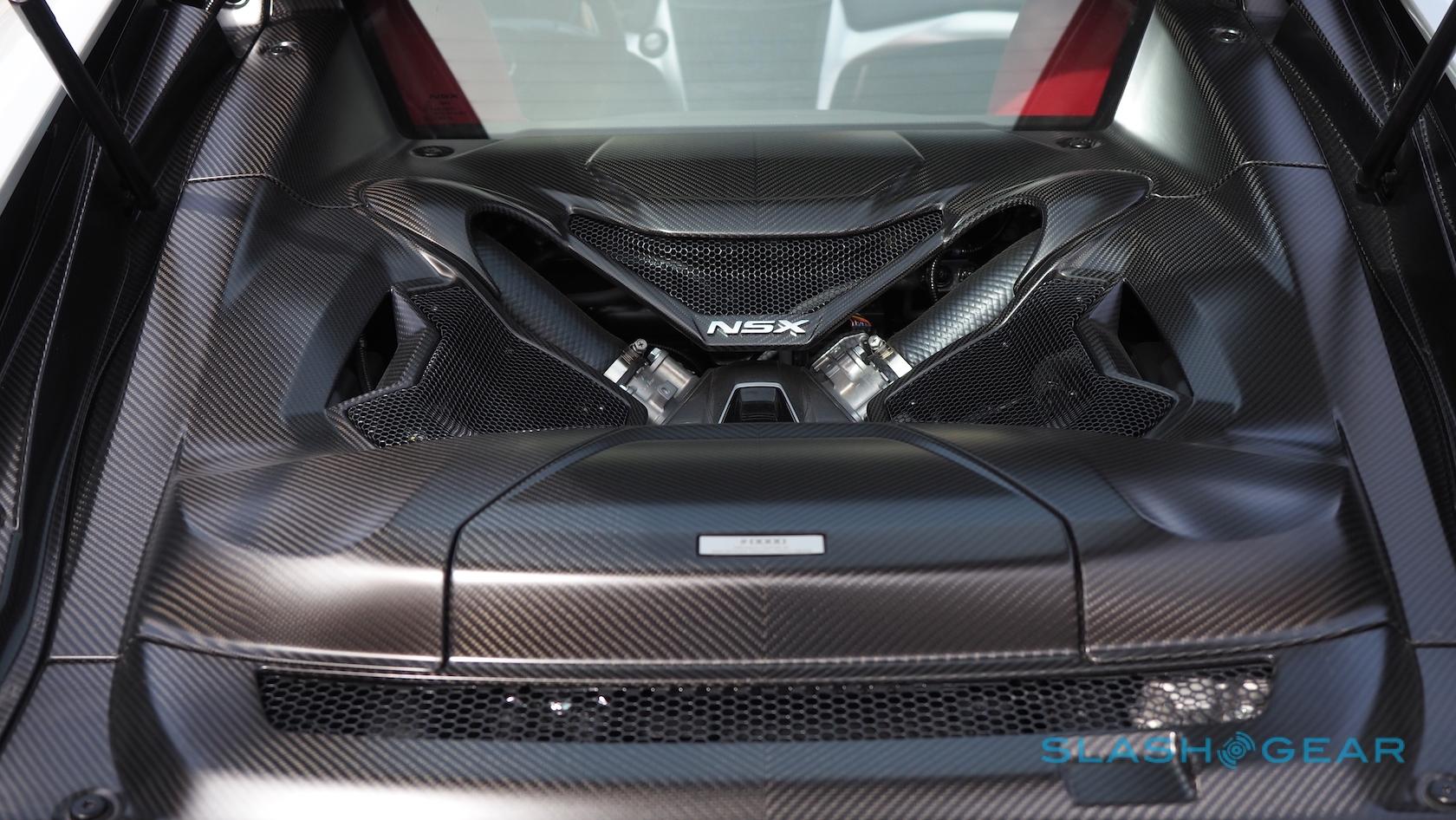 That’s because the NSX has been electrified, with not one but three electric motors in various places in the car. The biggest is the Direct Drive Motor, nestled in alongside the V6 itself, and contributing 47 HP and 109 lb-ft. of torque.

They may not sound like huge figures – the NSX’s gas engine is good for 500 HP and 406 lb-ft. alone, after all – but it’s how they’re implemented that’s important. Acura uses the Direct Drive Motor to assist the V6: its peak torque comes in between just 500 and 2,000 rpm, when the twin-turbos are still spooling up, so as to smooth out any turbo lag. From 2,000 rpm on, the V6’s own max torque is delivered. 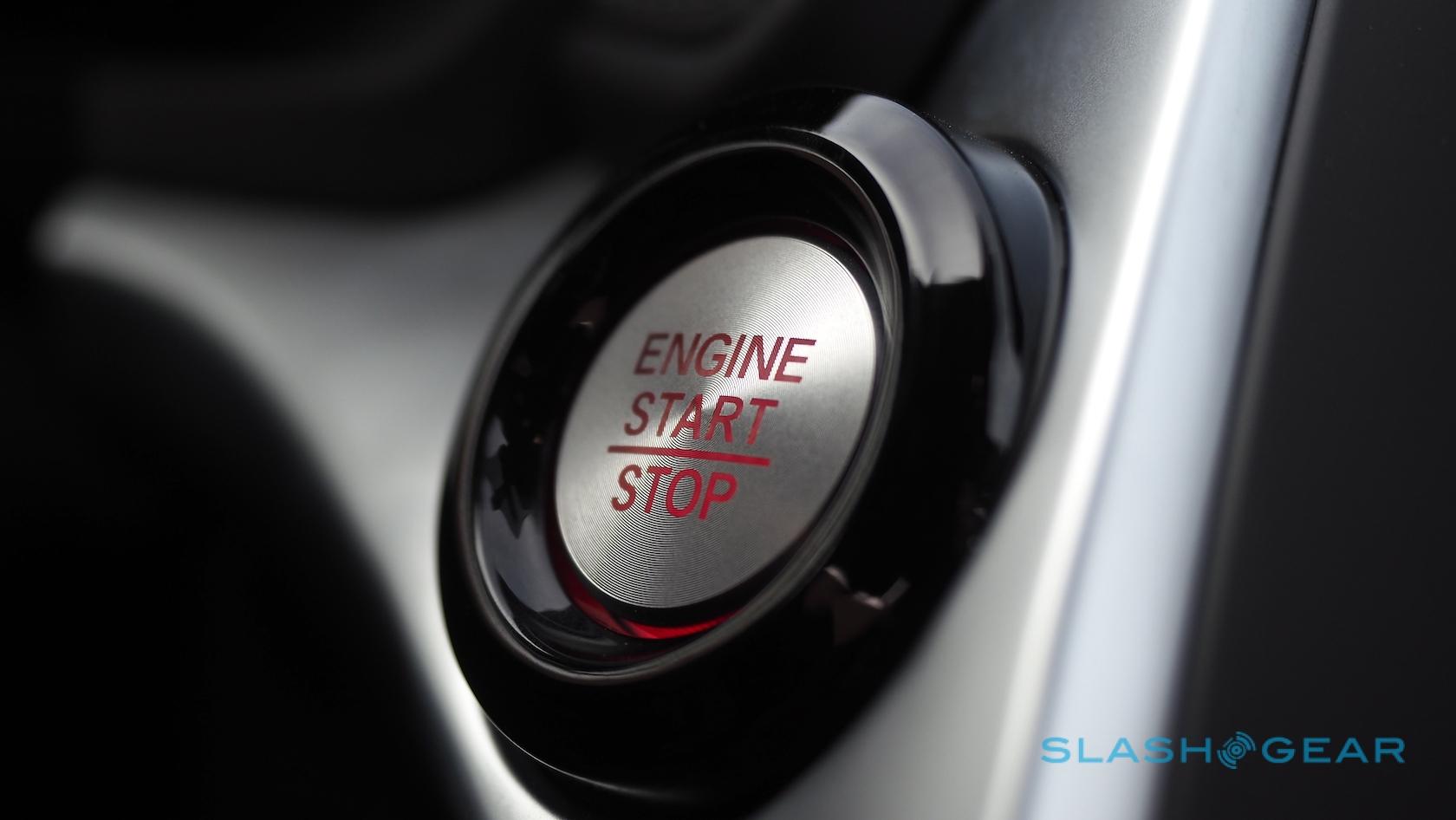 At the front, meanwhile, is the Twin Motor Unit, a pair of electric motors that drive the front wheels. Again, on their own they pale next to a Tesla Model S, but Acura applies them in a targeted way.

Each is good for 36 HP and 54 lb-ft. of torque, with the latter coming in from 0-2,000 rpm. That means as soon as you hit the throttle you get maximum torque, an instantaneous shove forward as the electric drive hands over to the gasoline. Even when the V6 is doing its thing, the electric motors aren’t idle, either being used to regenerate power for the batteries during braking, or to smooth out the dip in gas engine power during gearshifts.

However, their magic doesn’t end there. They’re also instrumental in how the NSX delivers a special type of all-wheel drive.

Not all SH-AWD is created equal

If you’ve been following Acura for some time, you’ll probably have heard of SH-AWD. Super Handling All-Wheel Drive is the umbrella term for Acura’s torque vectoring system, shifting engine power between the different wheels of the vehicle according to which has most grip, and which will deliver the best handling and/or acceleration.

It’s been a mainstay of Acura cars and SUVs for years now, but while the new NSX may bear same badge, its interpretation of SH-AWD is considerably different.

In the case of the new supercar, it’s actually Sport Hybrid SH-AWD, and it uses the electric motors on the front wheels to individually control torque to each.

Traditional torque vectoring SH-AWD splits the engine torque from left to right on the back wheels, driving one more than the other to increase the car’s turning force. On the NSX, though, the rear wheels get the power from the gas engine while the front wheels use an electric motor each for a special type of torque vectoring. 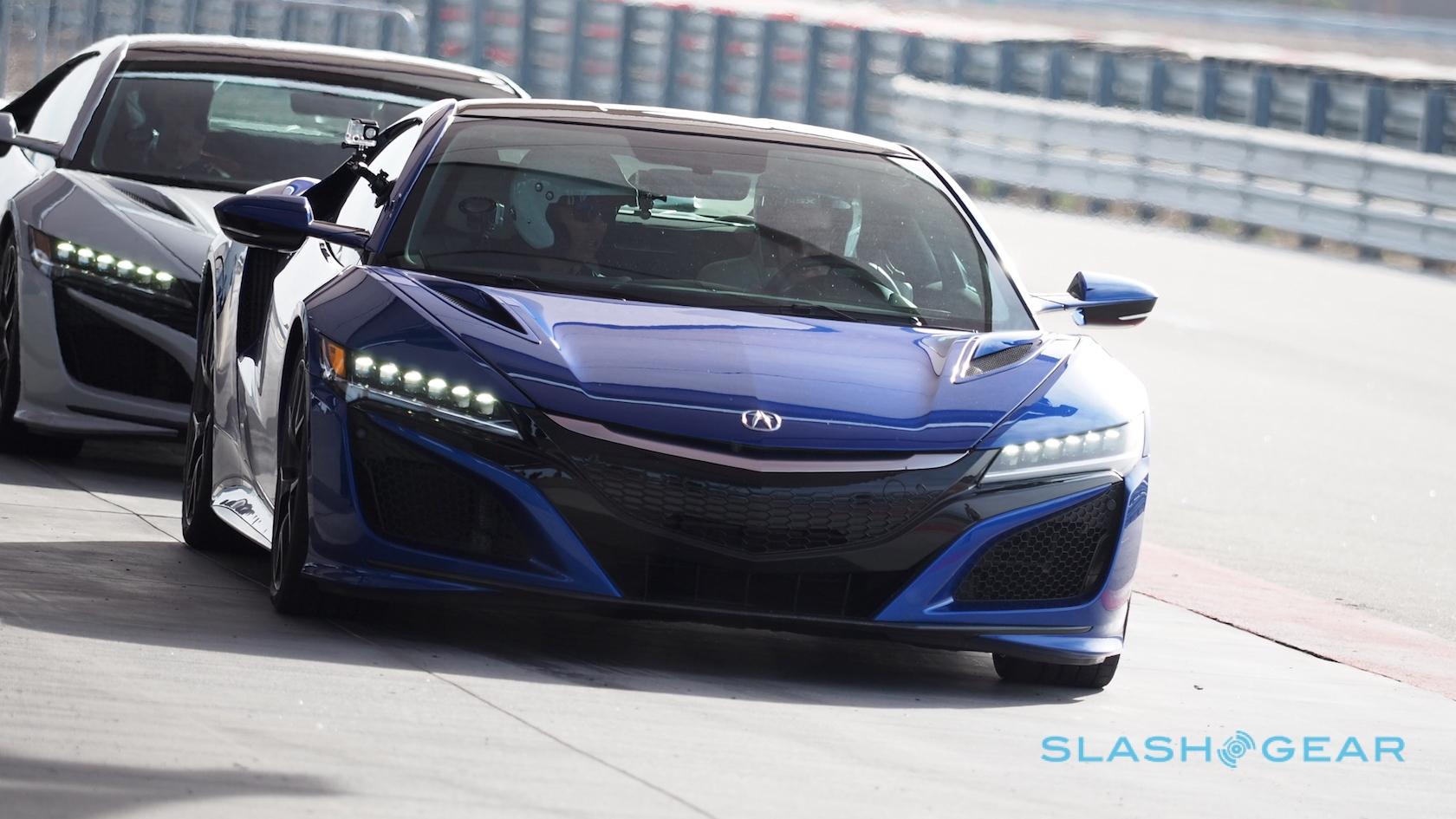 Like with the old system, the NSX can push one electric motor more than the other. However, it can also effectively apply counter-torque, dragging the wheel and thus increasing the overall effect.

It even has a beneficial impact on the hybrid aspect of the car, since the dragging motor works as a generator to recharge the battery in the process. The result, as we found both on the track and the road, is the tighter turns that make the NSX feel like it’s pivoting around you.

Somebody cut the brakes

Going fast in a straight line, going fast around corners… all that’s left is stopping, and preferably doing it fast too.

Like most hybrids, the NSX uses regenerative braking so as not to squander the energy created while the car is slowing. Just as the electric motors can be used for propulsion, so they can be metaphorically flipped around and used as individual generators, slowing the car in the process. 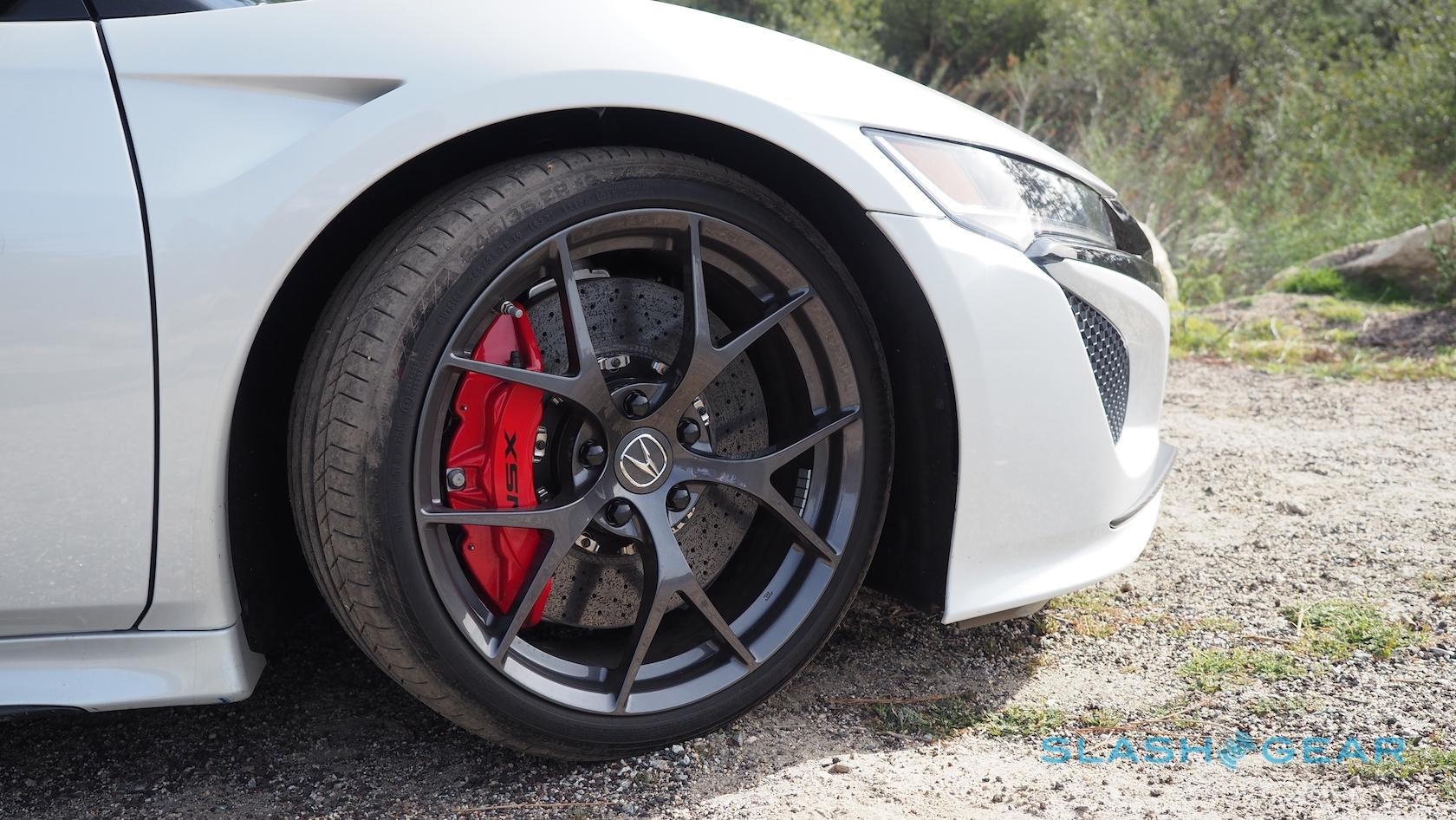 Unlike most of its rivals, however, there’s no mechanical connection between the NSX’s brake pedal and the brake mechanism. Instead, it uses brake-by-wire: the pedal is really a linear controller, much like the throttle trigger on a console gamepad, telling the car’s computers how much you want to brake. 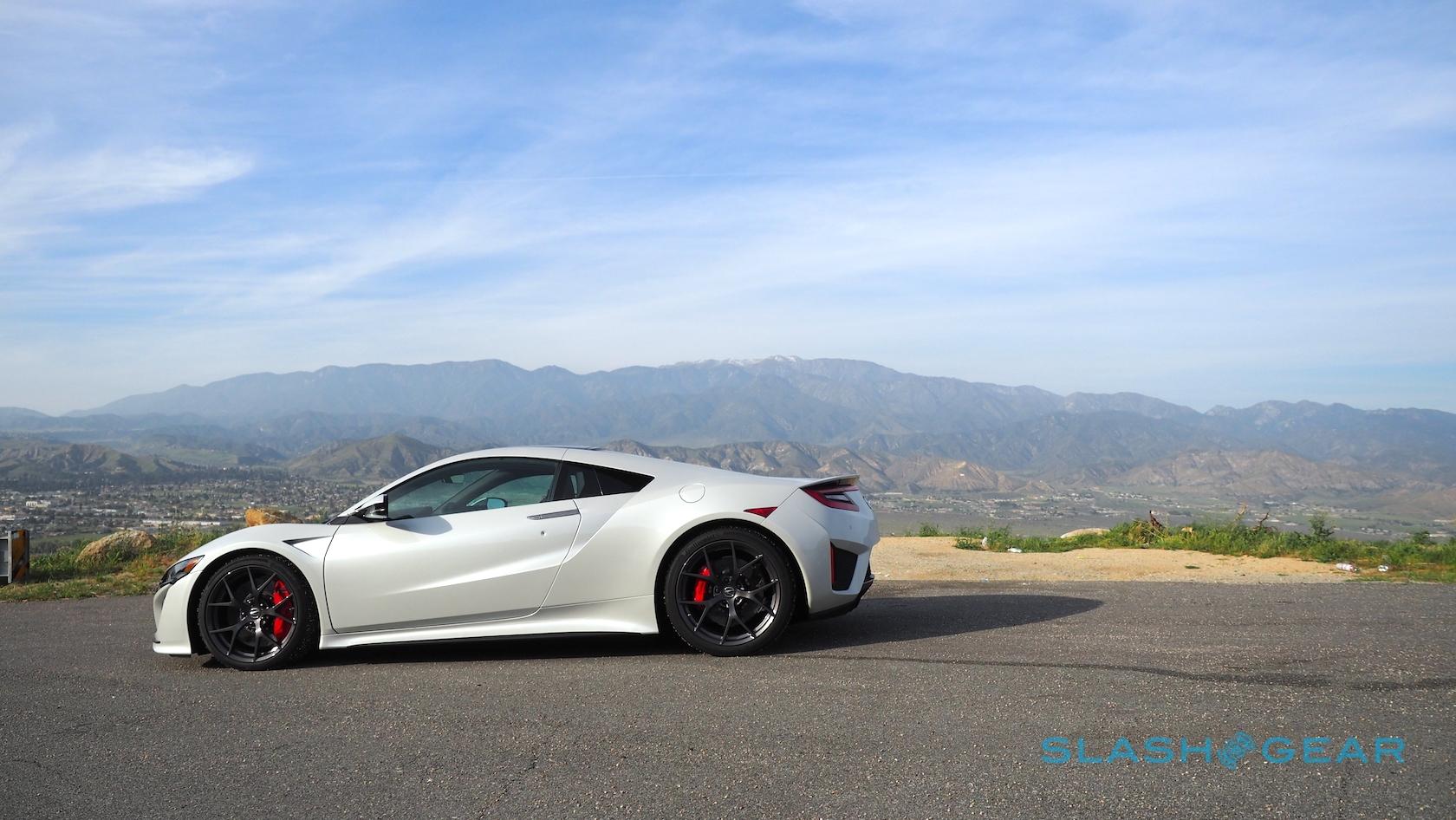 Since stomping on a gamepad switch isn’t especially informative for your right foot, Acura mimics normal brake feel with a brake operation simulator. Effectively, you tell the car how much you want to brake, the computer figures out how to implement that braking, and then instructs the pedal’s resistance to change according to what’s happened.

And if the electronics fail? The NSX can use the traditional hydraulic system entirely, just in case. After all, sometimes it’s good to have the old school systems there for backup.

Still hungry for more on the 2017 Acura NSX? Check out our full drive report for all the details!