The 2020 Land Rover Defender is pitch-perfect

Nobody was surprised that the 2020 Land Rover Defender returning the classic nameplate stateside drew praises. Realists were overjoyed by how the new Defender managed to pay homage to its original styling without ruining the boxy, go-anywhere attitude of the original. On the other hand, there are of course the purists who prefer simple mechanicals, crude yet dependable suspension and drivetrain components, and an earthquake-proof body-on-frame chassis, the latter of which is also generally responsible for a bone-shaking and teeth-chattering ride.

The new Defender still does the things purists were hoping it would do, but if you’re a realist, it’s essentially the same Defender, albeit in a lighter, more modern, and more capable package. We’ll get to the engineering part in a bit, but first I’d want to first discuss some of the key design elements.

Depending on who you ask, the new Defender’s appearance is either incredible or a travesty. Personally, after seeing it in the metal, I think both of the 90 and the 120 are designed to fit the build for mass appeal over time. You have to admit, you’re probably still wishing for the squared-off cues of the original, and that I understand, but I assure you, there’s an immediate sensation of familiarity. It’s like seeing a blood relative or childhood friend for the first time in ages. And for me, that’s a good thing. 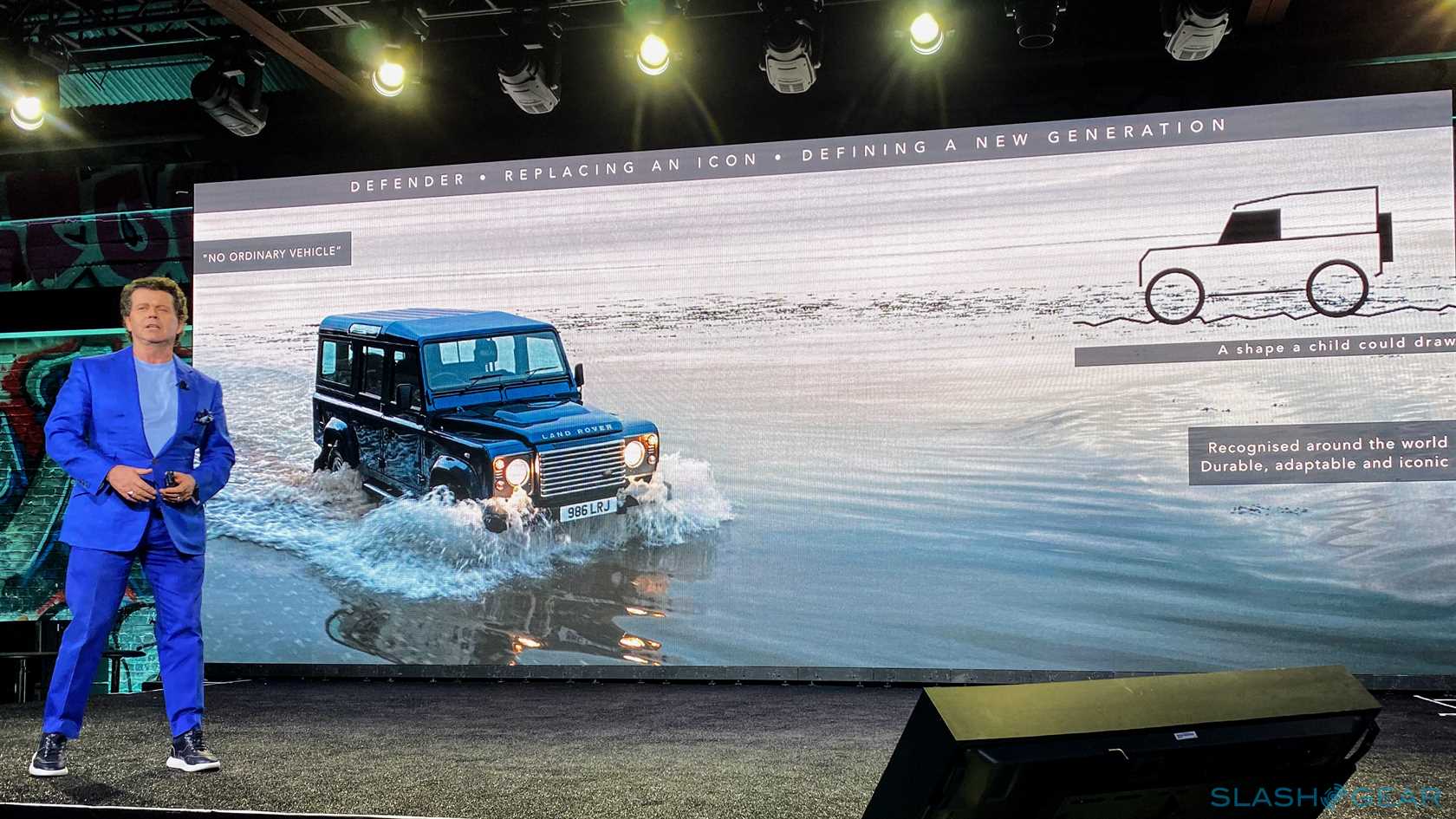 I’m just as delighted that the design team took absolutely nothing from the existing product lines such as the Evoque or Velar. “It’s a simple, simple shape that a child can draw it,” said Prof. Gerry McGovern, design director for Jaguar Land Rover. “But from a design and engineering point of view, it was important that we acknowledge the old Defender, but we could not be restricted by it because the new model has to be designed for a world that has changed massively from when the original Defender was created.” 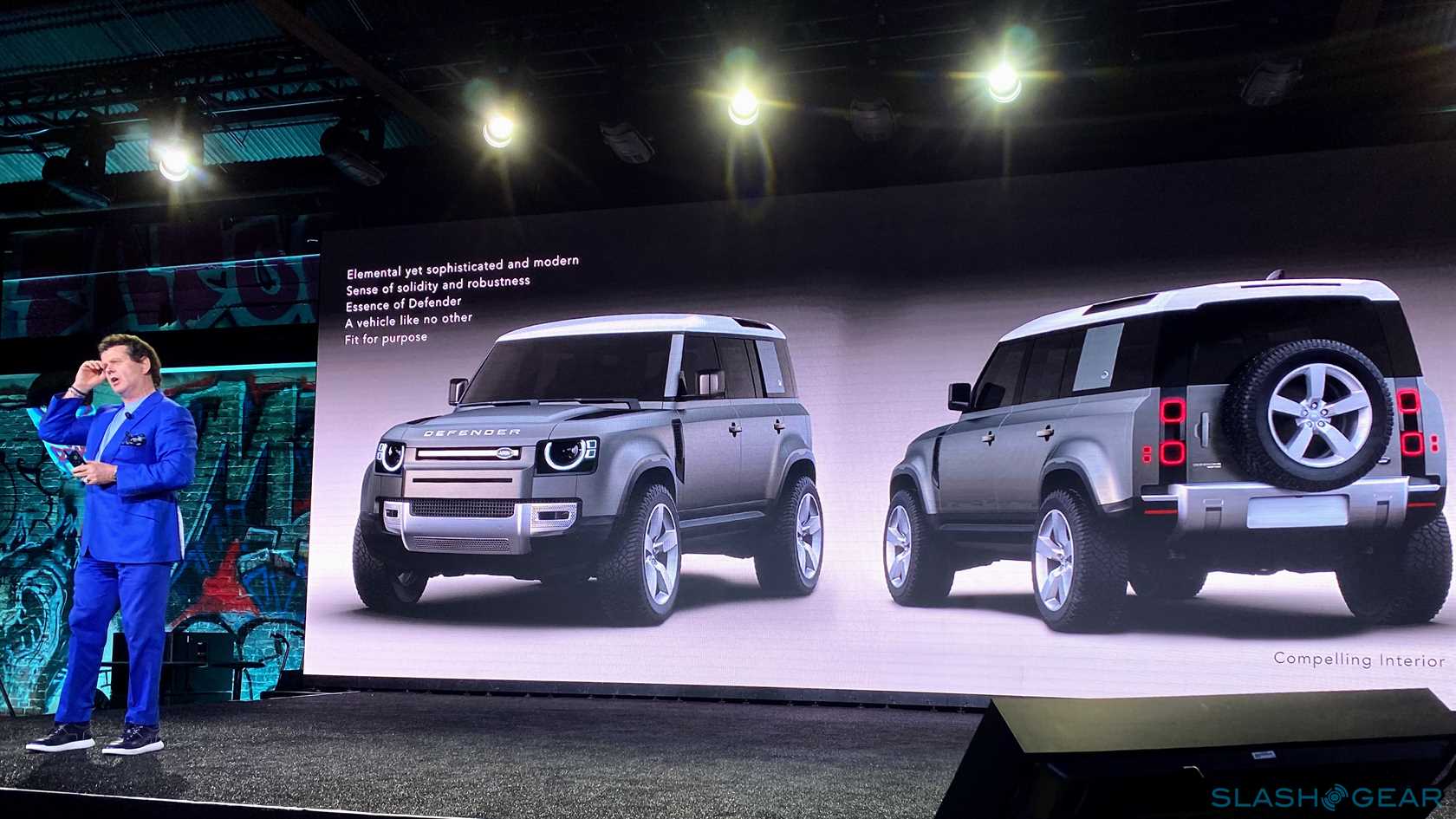 It means a silhouette that’s unmistakable, whether you’re looking at the Defender 90 with its 101.9-inch wheelbase (and which will arrive later next year) or the Defender 110 with its 119-inch wheelbase – longer than a Land Rover Discovery – and four proper doors. The proportions are not only optimized to achieve a well-balanced design, but the shape has something to do with the Defender’s all-terrain capabilities. 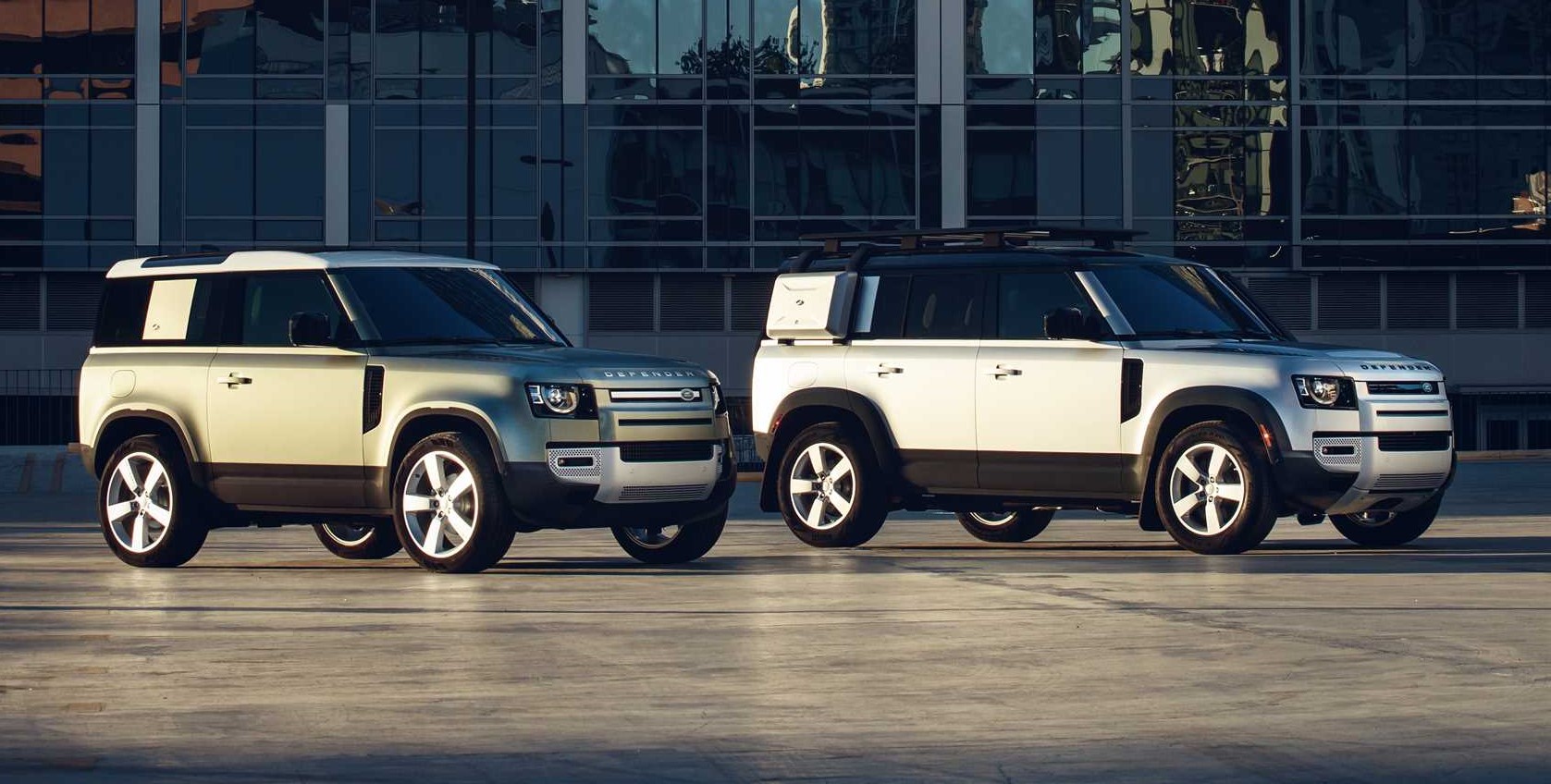 “The new Defender is an excellent example of reconciling design and engineering,” added McGovern. Both the front and rear wheels are stretched further towards each side to give the new Defender extremely short overhangs. And while that’s a famous strategy in coupes and convertibles for injecting a dose of sportiness, it also means better interior room, more efficient cargo space, and unparalleled all-terrain capabilities. In fact, the Defender 110’s impressive approach, break-over, and departure angles allow it to conquer virtually any type of terrain. If the wheels can dig in, the new Defender can probably go over it. 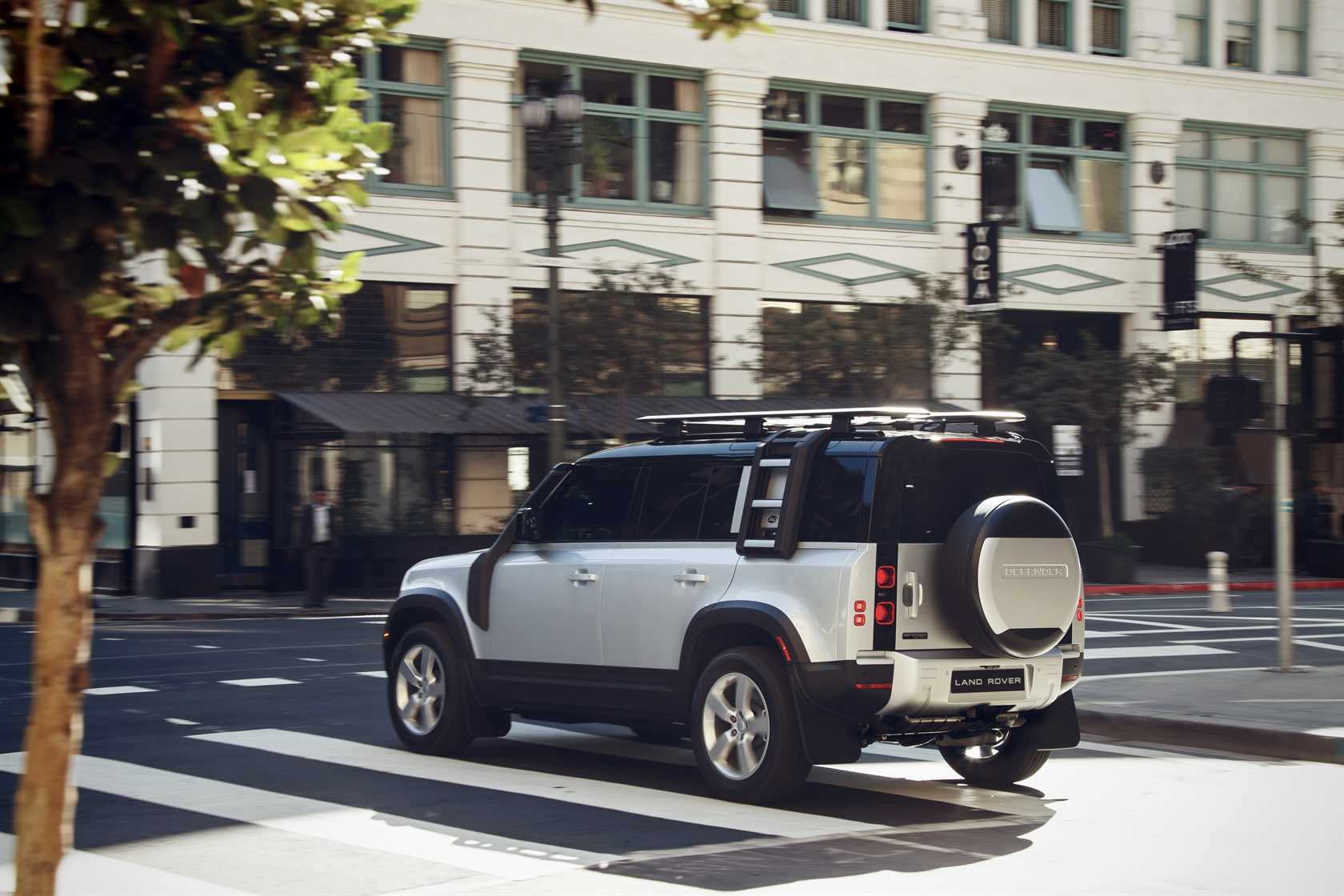 Don’t let the new aluminum body-on-frame architecture leave you thinking this is anything akin to a compact crossover. The new SUV is built on a new architecture that’s three times more rigid than the conventional body-on-frame design underpinning previous generations of the Defender. “The mission was to engineer an authentic Defender for the modern world,” said Mark Wilkinson, lead manufacturing engineering specialist at Jaguar Land Rover. “We were given a clean sheet brief: just make it the best. We created a new and more challenging test regime that is unique to the new Defender, to develop the toughest, most durable, and capable Land Rover ever.” 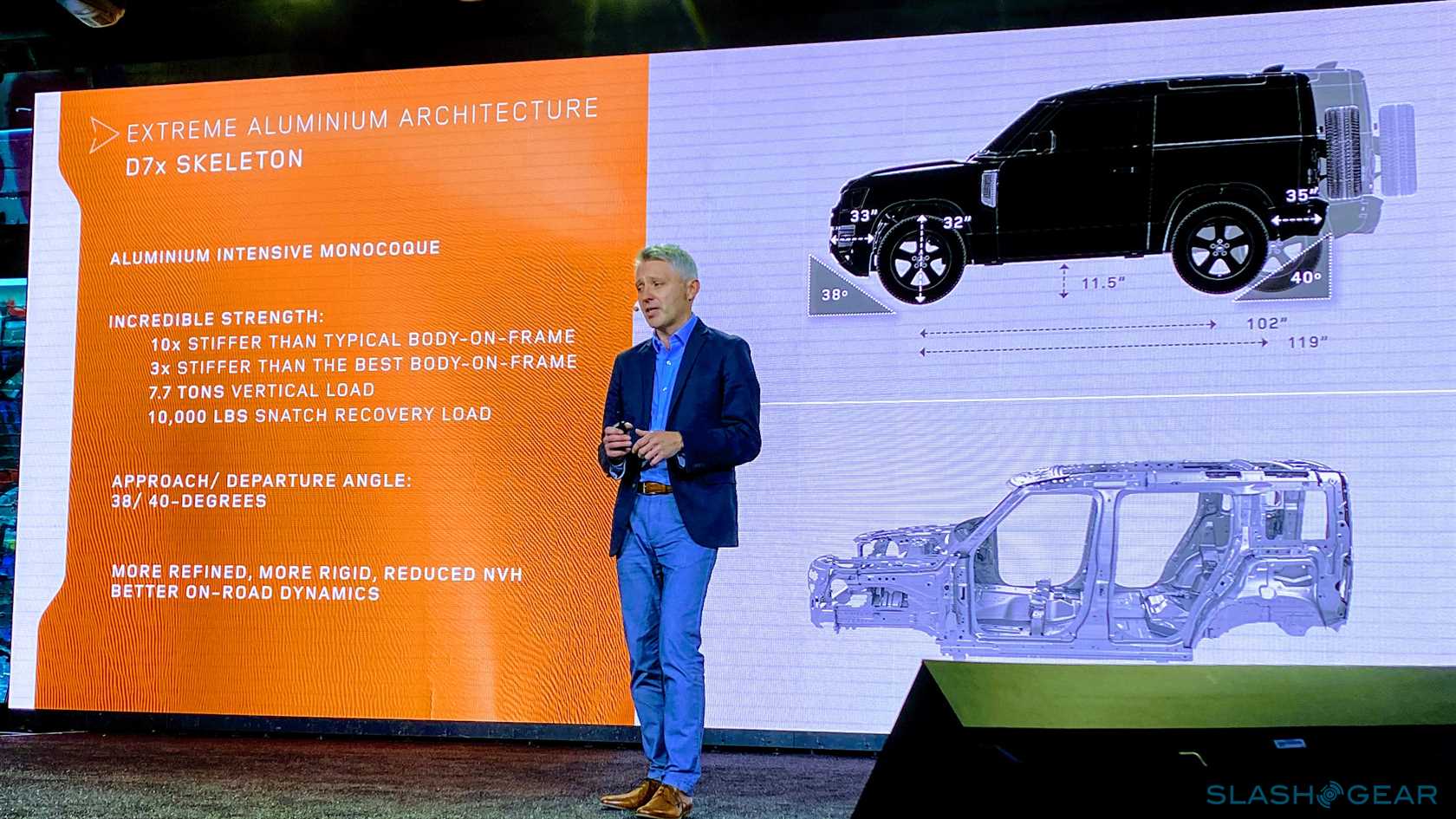 It starts with the aforementioned D7x aluminum unibody platform – the stiffest Land Rover has ever developed – coupled with permanent all-wheel-drive, front and rear fully-independent suspension, and a twin-speed transfer box. This makes the Defender an incredibly capable off-road vehicle. “But what you might not expect is the new Defender is equally capable on the road,” added Wilkinson. And for me, this makes a lot of sense. Unlike hardcore SUVs of former times, modern SUV owners do most of their driving around town and in open highways, which the old Defender tends to hop, skip, and jump hard enough to give passengers soreness all over. “That same aluminum architecture gives it precise and immediate dynamic response along with the comfort required to make it an everyday car,” concluded Wilkinson. 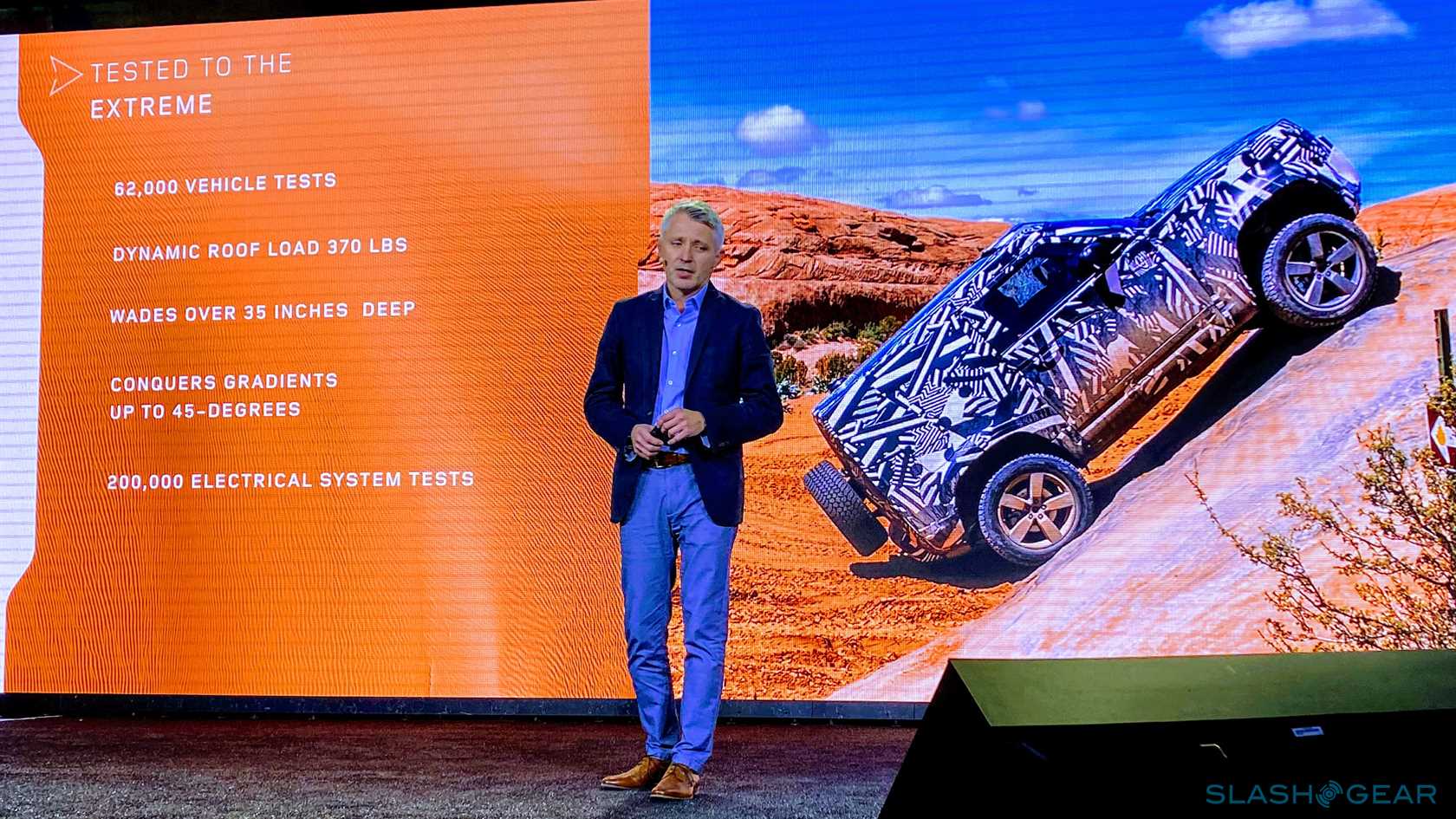 The new Defender will be available in two configurations: P300 and P400. The former is equipped with a 2.0-liter turbocharged inline-four that’s good for 296 hp, while the latter is a virtual tech-fest of modern go-fast parts. Not only is the P400 equipped with a 3.0-liter turbocharged inline-six, but it also has an electric supercharger powered by a 48-volt mild-hybrid system, which also harvests braking energy to feed a small lithium-ion battery pack for stop-start capabilities. Combining all these elements provides 395 hp and 406 lb-ft of torque, enough to launch the Defender P400 from 0 to 60 mph in 5.8 seconds. Also new is a brake-by-wire system to produce more precise and linear braking pressure, for superior dynamics with less body pitch. 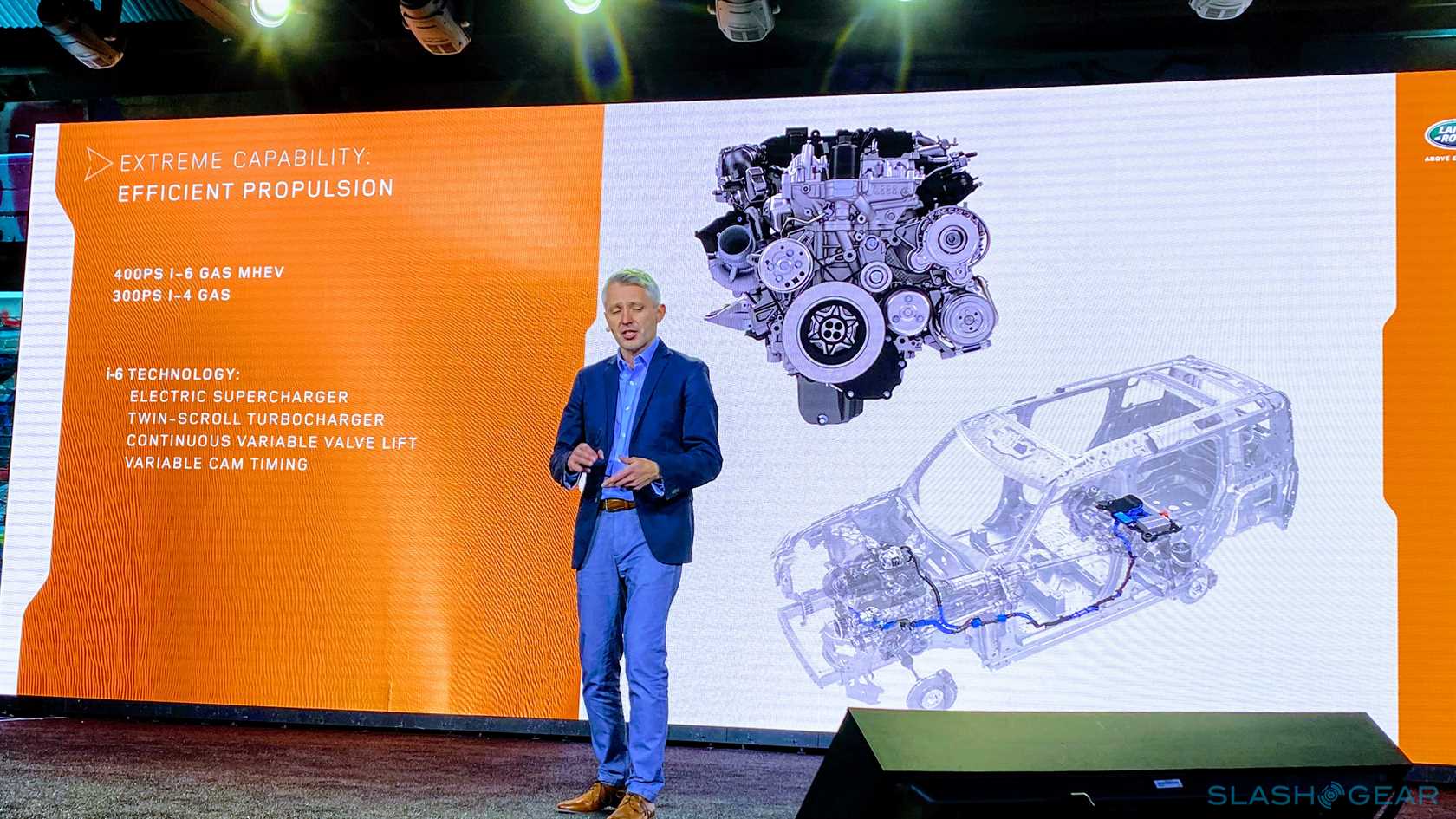 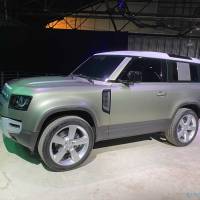 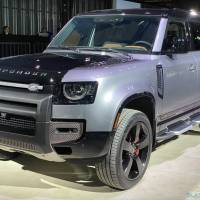 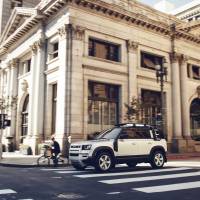 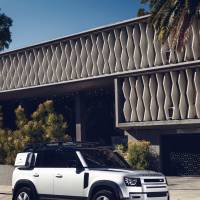 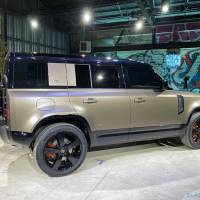 Younger and more tech-savvy buyers should appreciate the new electrical architecture that carries double the amount of data using a centralized computer with three domain controls to handle the infotainment, drive systems, and connectivity. This new computer is continually connected to the cloud and is protected by a multi-layer cybersecurity system. “This system has been tested by a number of publications and is yet to be defeated,” Wilkinson boasted. The operating system has a smartphone-like user interface with a flat menu structure and fast reaction time. “We’ve been obsessed with how to reduce cognitive workload. Ninety percent of your tasks can be accessed directly with one touch.” 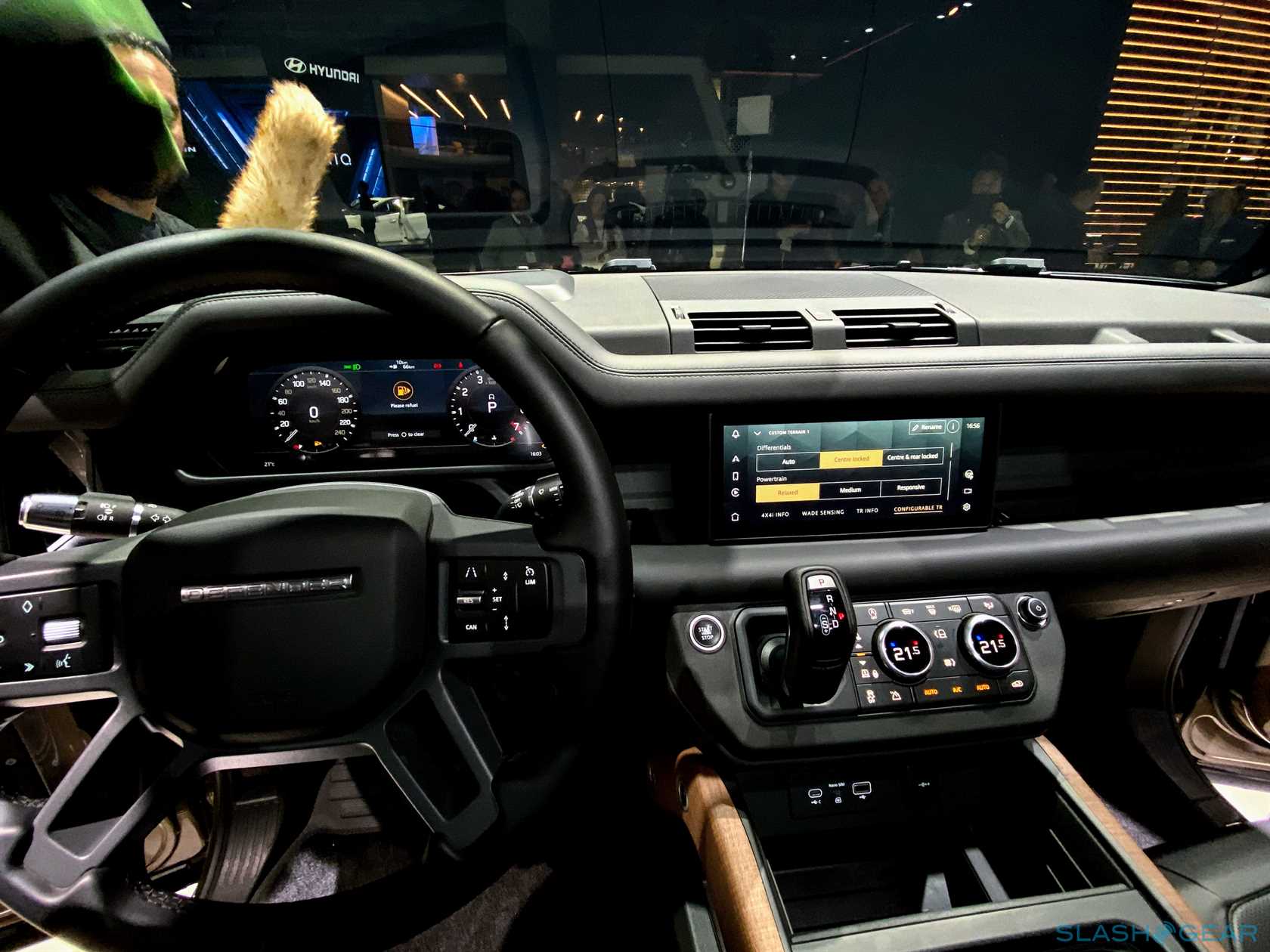 For a vehicle so associated with the UK, I couldn’t help but notice how Land Rover paid close attention to American car culture when outfitting the new Defender. Perhaps one of the biggest nods to Americanism is the bench-type front seat which, according to Director of Product Planning, JLR North America Rob Filipovic, is definitely coming stateside.

“Almost every full-size pickup in the US market come standard with a front bench,” he said. “For many people its an unexpected novelty because it’s not typical of an SUV, right. But there’s a massive precedent that existed in the original Defender.” It’s a brilliant balance between form and function: fold down the seat rest, and it transforms into a center console with cup holders; fold it up, and you’ve room for another passenger. 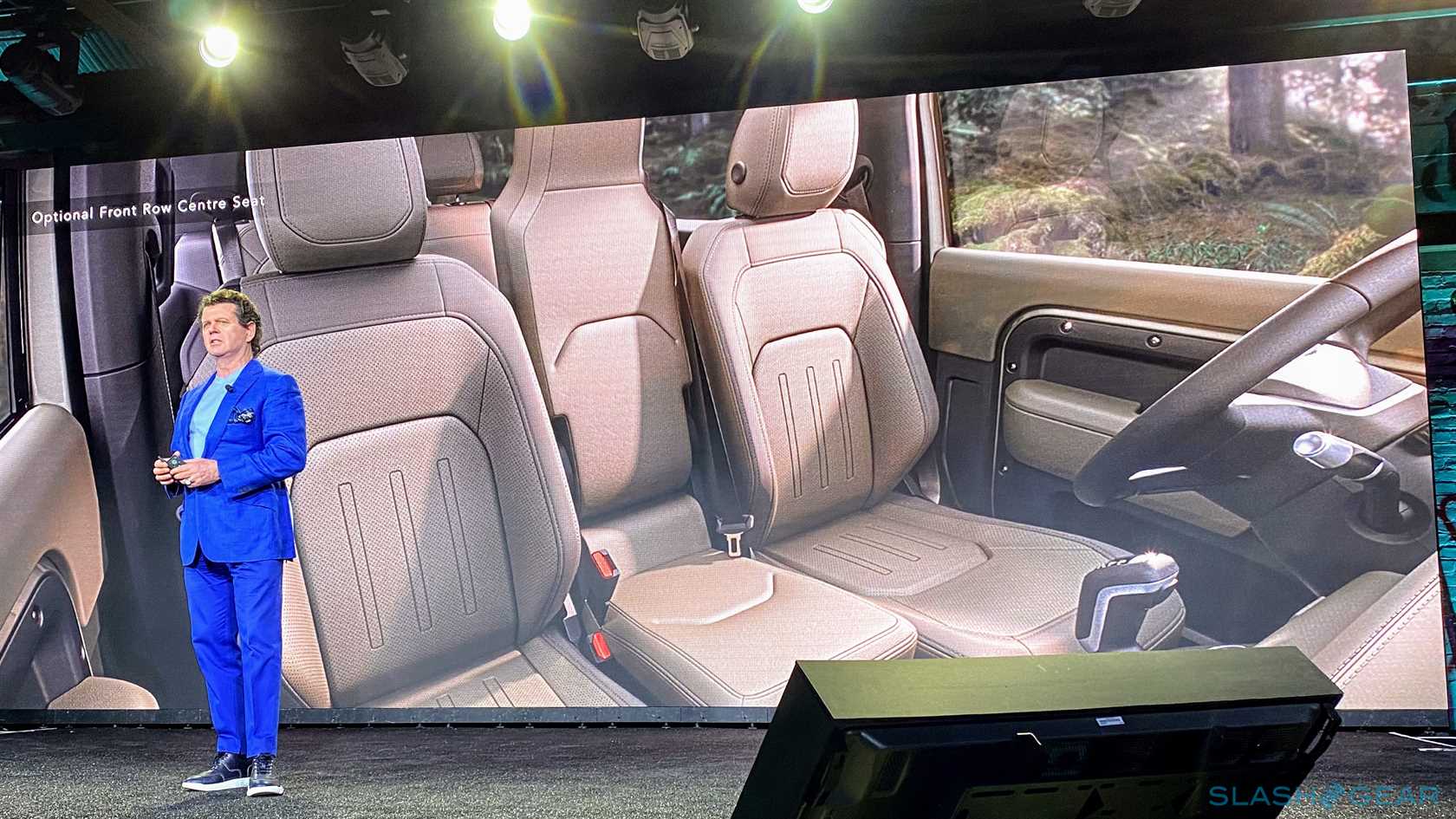 You also can’t help but notice that the interior materials are bordering on the practical side, rather than plush leather and carpeting you’d find in a Range Rover. That strikes me as sensible, given the new Defender really is targeting people who actually utilize their SUVs to the core. Still, if you’re going to spend most of your time on the road, you can specify leather seats, wood veneers, and literally the whole shebang to make it your ultimate luxury off-roader. Not bad at all for a base price of around $49,999. 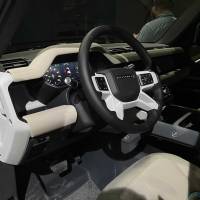 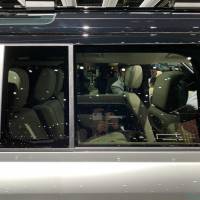 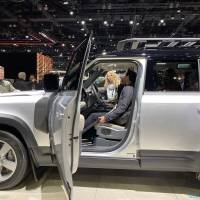 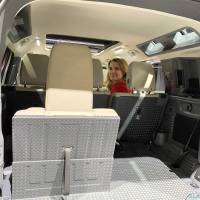 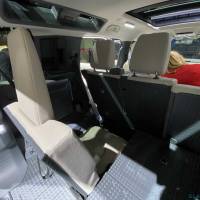 “At its core, we needed to make sure that it was capable of just about anything – being able to deliver that diversity instead of it just being tailored to one type of person,” Land Rover’s Filipovic concludes. “With the Defender, we’ve got something that can be like the roughest and tumble or just beat the hell out of it inside and outside, up to making it a nice, luxurious ultimate off-roader.”

In short, the new 2020 Defender may take its cues from the past, but it does so while paying respect to the future. Land Rover is proving it can teach an old dog new tricks, and I can’t wait to see it return to US roads.