Full-size trucks may look tough, but not every load-hauler is created equal according to the IIHS safety test scores for 2016. The Insurance Institute for Highway Safety put seven large pickups through their paces – some of the best-selling models on the market today – in a more stringent set of tests than normal, and the results are likely to cause more controversy among truck fans.

For a start, the IIHS decided to carry out its testing on not one but two different configurations of each model, crew cab and extended cab. The former have four full doors and two full rows of seating; the latter get a more compact second row, along with full-size front doors but smaller rear doors.

The change in process was triggered by the Ford F-150, and ironically it’s the aluminum-bodied truck which comes out best in the 2016 testing. Last year, the IIHS realized that the F-150 SuperCab – Ford’s extended cab version – lacked some of the safety systems that enabled its SuperCrew – the crew cab model – to get a top score in the small overlap test.

[Update: Ford tells us that, since the IIHS small overlap test was introduced after 2015 F-150 development began, the company prioritized adding countermeasures to the SuperCrew version of the truck as it’s their high-volume configuration. The changes were then applied to the 2016 SuperCab and Regular Cab variants.

“We implemented these SORB countermeasures as soon as we were able,” a Ford spokesperson told SlashGear, “and the other truck manufacturers were given the same amount of time and originally notified of this testing in 2014.”

That test, one of the toughest for even cutting-edge vehicles to ace, involves modeling what would happen to the car or truck if it struck a relatively narrow obstacle, such as a tree or utility pole.

The vehicle being tested impacts the IIHS rig – a 5-foot-tall rigid barrier – at 40 mph, with 25-percent of the front making contact. IIHS looks for factors like intrusion of wheels into the footwell, movement and forces applied to the test dummy, and more.

Ford took the F-150 back to the labs, and ended up the only 2016 model year truck the IIHS tested to get an overall “good” rating, the top score the organization awards. Chevrolet’s Silverado 1500 Double Cab, GMC’s Sierra 1500 Double Cab, and Toyota’s Tundra Double Cab all scored “acceptable” in the tests.

However, the Silverado 1500 Crew Cab, Sierra 1500 Crew Cab, Tundra CrewMax, Ram 1500 Quad Cab, and Ram 1500 Crew Cab were all rated as “Marginal” by the IIHS. All but the F-150 scored “Poor” when it came to lower leg & foot injury in the small overlap test; both of the Ram models rated “Poor” in vehicle structure during the test, too. 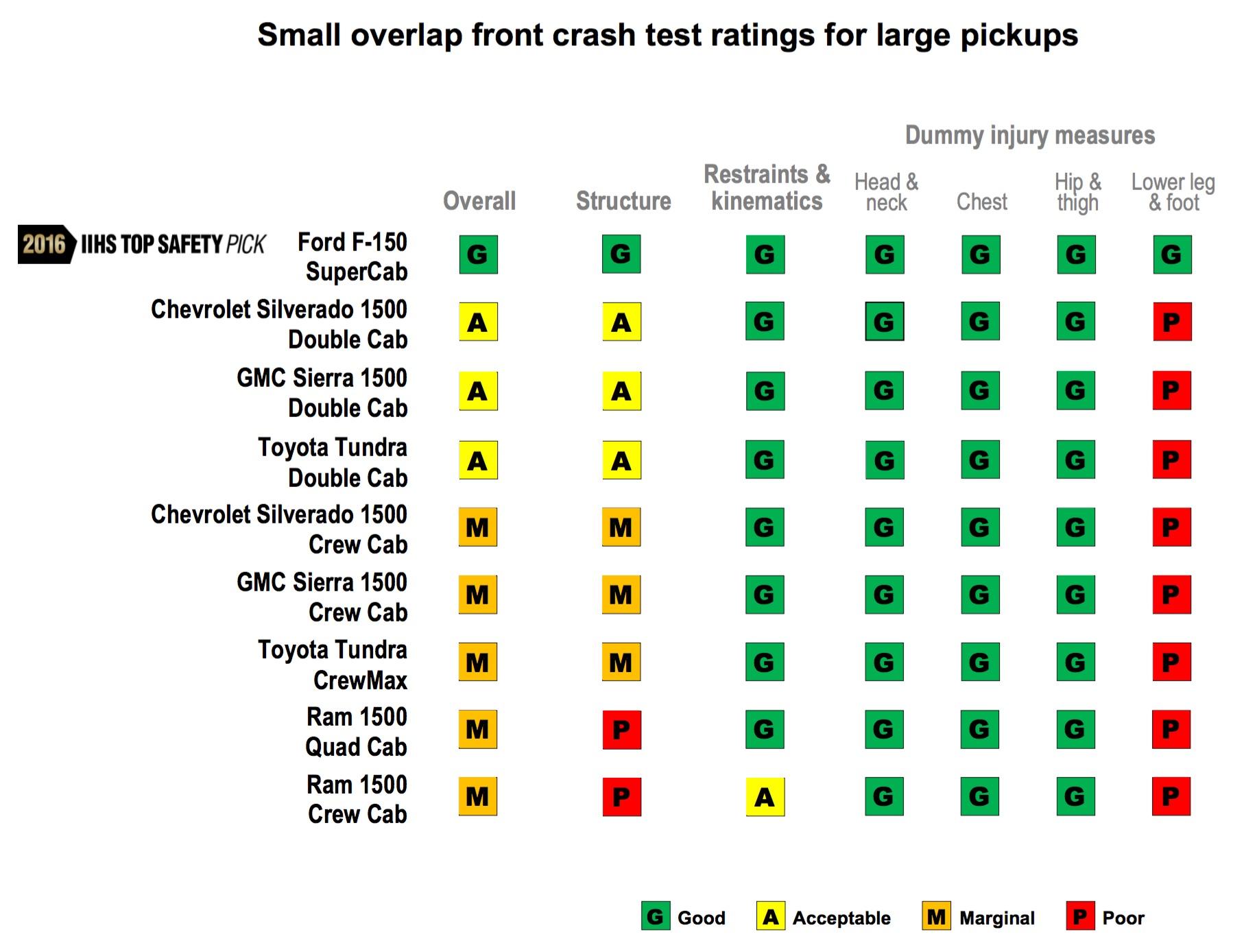 “Drivers in these pickups would need help freeing their legs from the wreckage following a small overlap crash,” Raul Arbelaez, vice president of the Institute’s Vehicle Research Center, said of the tests, calling for manufacturers to rework their trucks to increase protection for the lower occupant compartment.

Later this year, the IIHS plans to test two of the most hotly-anticipated entrants to the full-sized truck segment, the new Nissan Titan and Honda Ridgeline.

As for occupant protection in the case of a rollover crash, the results were also mixed. Of the models examined, the F- 150, both of the Silverados, and the Tundra Double Cab scored “Good”, but the Tundra CrewMax only rated “Acceptable”, while both of the Ram trucks only managed “Marginal.”

It’s not all bad news, mind. All of the tested models scored “Good” ratings in the moderate overlap front test, side test, and head restraint evaluations.