That 2-minute coronavirus test FDA approval was a “misunderstanding”

After claiming they’d received FDA authorization for a 2-minute coronavirus antibody test earlier this week, a company called Bodysphere just changed their tune. They made clear in their press release released at the tail end of March, 2020, that the Food and Drug Administration had approved their coronavirus (COVID-19) testing kit. It all seemed too good to be true. Turns out, it was.

The test kit suggested that they’d created an “Instant Test” that took 2-minutes to run. A Rapid Test Cassette, complete with an official FDA logo stamp on the side of the box – there’s even a check mark above the ISO number 13485 and the FDA logo.

“The test kits have been used successfully in several states where large roll outs are planned to combat the spread of the virus,” said the original press release entitled “FDA Authorizes New Two-Minute Serological Test Kit to Detect Novel Coronavirus.”

The press release – now removed from sites like Business Wire, went on to claim, “BODYSPHERE is working closely with federal agencies and states to quickly deploy test kits across the country to hospitals, urgent care and emergency rooms. The company has already contracted cargo planes to deliver the product to the front lines faster. BODYSPHERE is positioned to have millions of test kits on the front lines in weeks.”

This COVID-19 IGG/IGM Rapid Test Device was shown in a set of images earlier this week and reported on by several major news sources like Reuters, Axios, and sources that use Reuters reports, like the New York Times. On the 1st of April, 2020, the FDA sent out a comment on the situation, saying “No serology tests have received an authorization to test for coronavirus.”

In a statement sent in the evening of the 1st of April, 2020, Bodysphere’s CEO Charlton Lui said they’d made a mistake. This wasn’t an April Fools Joke, apparently. UPDATE: The official Bodysphere website MyBodySphere has scrubbed the site of mentions or depictions of FDA approval for their “Rapid Test.” Instead, the following statement was posted:

“In the rush to get the desperately needed test kits to the front lines, BODYSPHERE believed when the manufacturer’s product was listed on the FDA Registry website, that was the Food and Drug Administration’s (FDA) notification the Emergency Use Authorization (EUA) was issued,” wrote Lei.

NOTE: The FDA site for Emergency Use Authorization for COVID-19 currently has no listing of a Bodysphere device. This listing of EUA authorizations is very simple to locate with a simple search engine query “fda eua list” – you’ll find the list second or third on the search list. 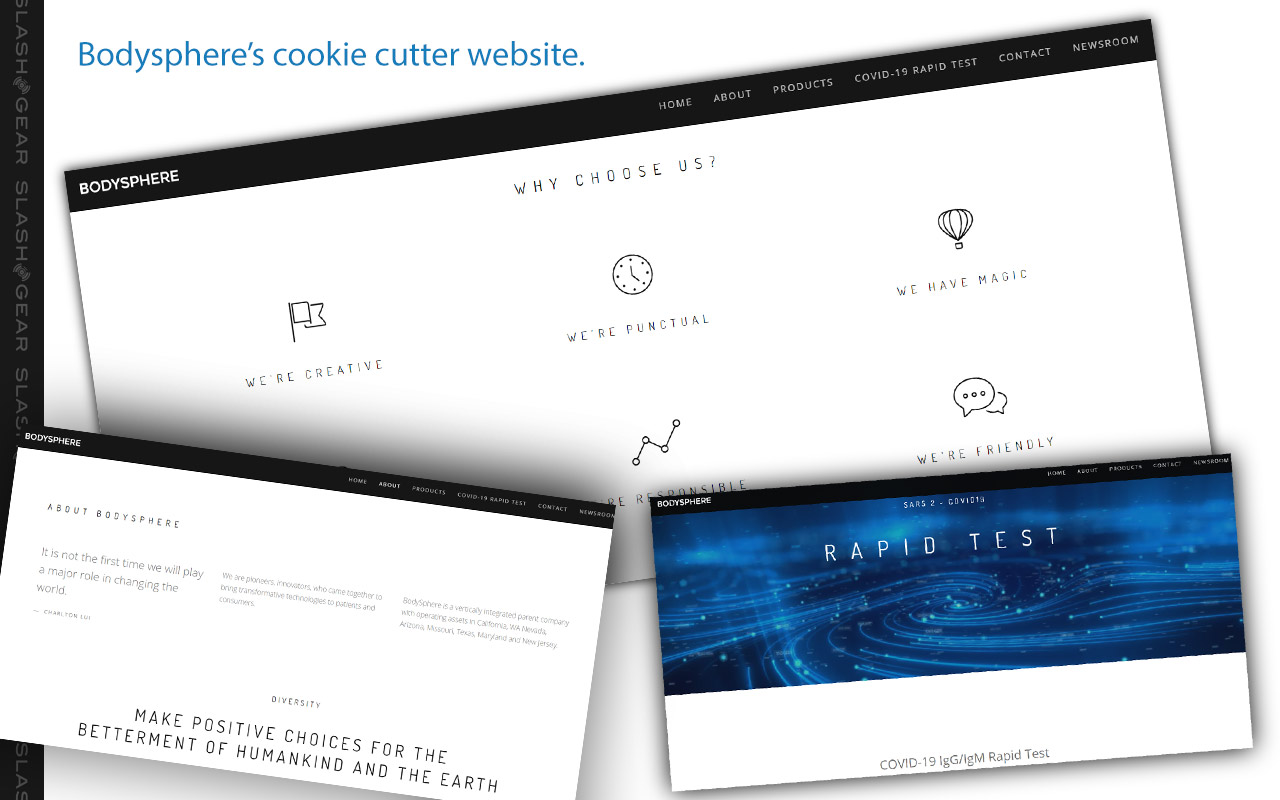 “This misunderstanding does not in any way invalidate the test kits authenticity or effectiveness,” wrote Lui. “Under the FDA policy, upon the manufacturer receiving its acknowledgement letter (attached)* from the FDA, BODYSPHERE being named the distributor on the EUA submission, was authorized to market and distribute test kits to any licensed healthcare practitioner in the United States for diagnostic use while the manufacturer awaits word of a final decision on its FDA EUA application.”

*This was apparently sent word-for-word in emails to sources overnight, as well. The statement went on to note that “the manufacturer has performed clinical trials and the information from those trials will be made available to any healthcare provider or government official seeking to validate the effectiveness and authenticity of these tests.”

The latest Bodysphere statement suggests that their “phone lines were overwhelmed from calls around the world to acquire these tests.” Further, they say they’re attempting to add new phone lines “that will be up and running ASAP to accommodate the influx of calls.”