Tesla’s Bioweapon Defense Mode gets put to the test

The safety features on your car are there to protect you from all sorts of things. Primarily, they’re designed to keep you as unharmed as possible when you face a collision. However, Tesla doesn’t want to just protect you when you’re involved in an accident, they want to keep the very air you breathe safe.

When you hear the words Bioweapon Defense Mode, it probably conjures up images of some sort of super spy car. However, this is an actual feature built into every Tesla. And while it sounds like the sort of thing you’d only need in a war zone, there are plenty of times when activating it can be very helpful.

When Tesla was designing their first cars, they decided that the quality of the air you breathe is important at all times, including while you’re driving. And when you’re sharing the highway with thousands of cars that are spitting out exhaust with every press of the gas pedal, they thought it was best to install a HEPA filter in each and every car they make.

Today, the company shared some of the tests that they’ve conducted on a Model X, to see just how efficient that filter is. To do this, they encased the vehicle in a giant bubble, and filled it to the brim with toxic pollutants. To give you an idea of the level of pollutants in the air, the EPA’s “good” air quality index limit of PM2.5 is 12 µg/m3. The air inside of the bubble contained 1,000 µg/m3. This was definitely air that you don’t want to breathe. The staff conducting the experiment had to wear gas masks to even be able to breathe at the beginning of the test.

Once the bubble had reached the proper levels, they closed the door to the car, and turned on its Bioweapon Defense Mode. In just two minutes, there were virtually no traces of the pollutants inside. The staff members were able to remove their gas masks and breathe normally, with absolutely no danger. What’s more, the air outside of the car was also getting cleaned. The levels outside the vehicle dropped 40% during the course of the test. Here’s a graph that shows just how quickly the Bioweapon Defense mode worked both inside, and outside the car. 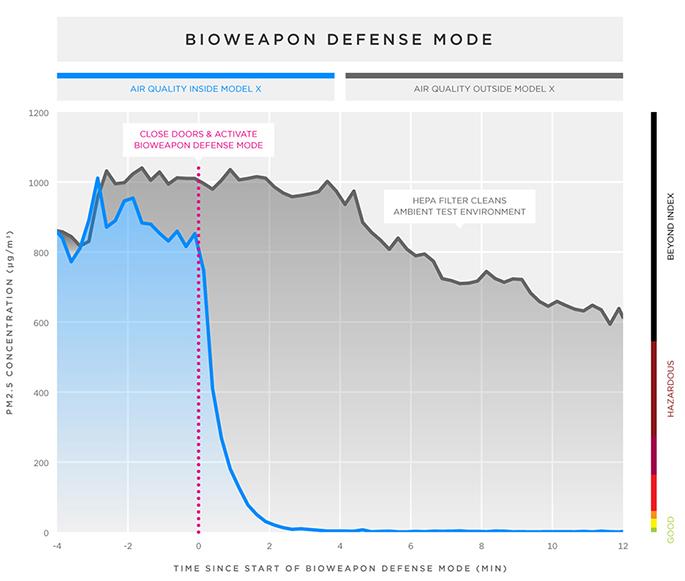 While you hope that no area you’re in becomes the site of a biological attack, Tesla claims that if you stay inside your car with this mode activated, you will be able to survive unharmed. And since it’s a car, hopefully you’ll be able to get yourself to a more permanently safe location.