Tesla has added a new, mid-range battery version of the Model 3, the most affordable iteration of the automaker’s all-electric car. The announcement was made by Tesla CEO Elon Musk, who also confirmed that the automaker has a new ordering system for the Model 3 which aims to make the process more smooth.

The Model 3 mid-range battery model is rear-wheel drive only. It has an estimated EPA range of 260 miles, and a top speed of 125 mph. 0-60 mph comes in 5.6 seconds. “It’s a long range battery with fewer cells,” Elon Musk explained. “Non-cell portion of the pack is disproportionately high, but we can get it done now instead of ~February.”

Pricing is listed at $45,000 before incentives and any savings. As usual, Tesla likes to quote not only federal and state incentives as potential savings for its cars, but savings on gas, too. In total, it claims a $33,200 price after those deductions, but exactly what you’ll pay depends on your state of residence.

It’ll also depend on when you take delivery of the car, since that’s when the US federal government’s $7,500 tax credit changes for Tesla. “All customers are eligible for the full $7,500 Federal Tax Credit if they take delivery by the end of the year,” the automaker says. “Current delivery timelines are 4 weeks for the west coast, 6 weeks for central and 8 weeks for the east coast. For delivery under 4 weeks, you can pick up your car directly from our Fremont factory.” 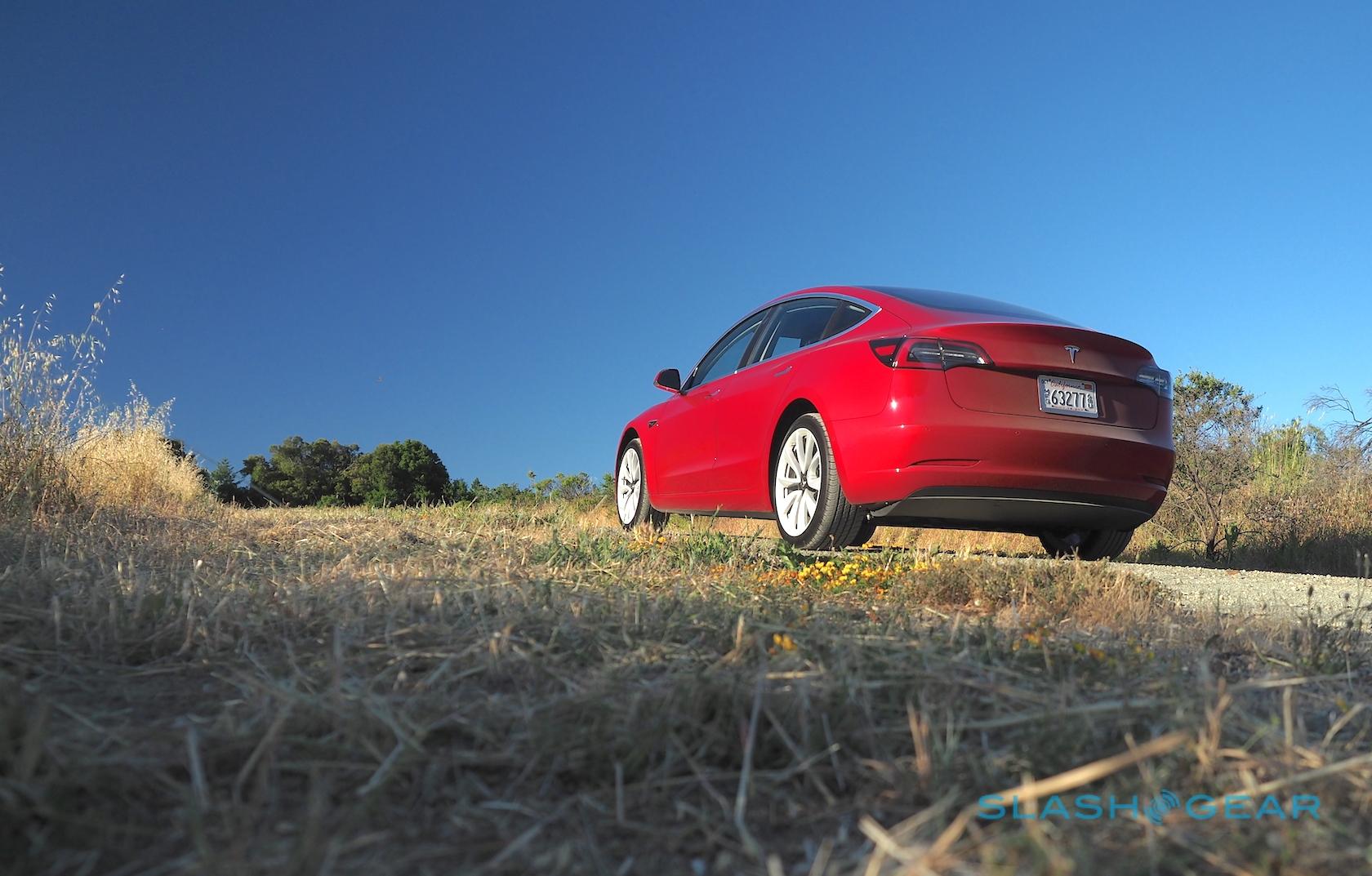 If you take delivery after December 31, 2018, however, it has a big impact on what tax credit you can claim. That halves to $3,750, in fact, and then halves once more – to $1,875 – from July 1 to December 31, 2019. That’s because Tesla has hit the US government’s limit for total EVs manufactured, at which point the credits begin phasing out.

According to Tesla, orders of the new mid-range battery Model 3 are expected to result in deliveries in 6-10 weeks. It comes with the black interior as standard, but can be ordered with the white interior – now known as the “black and white interior” – as a $1,000 option. 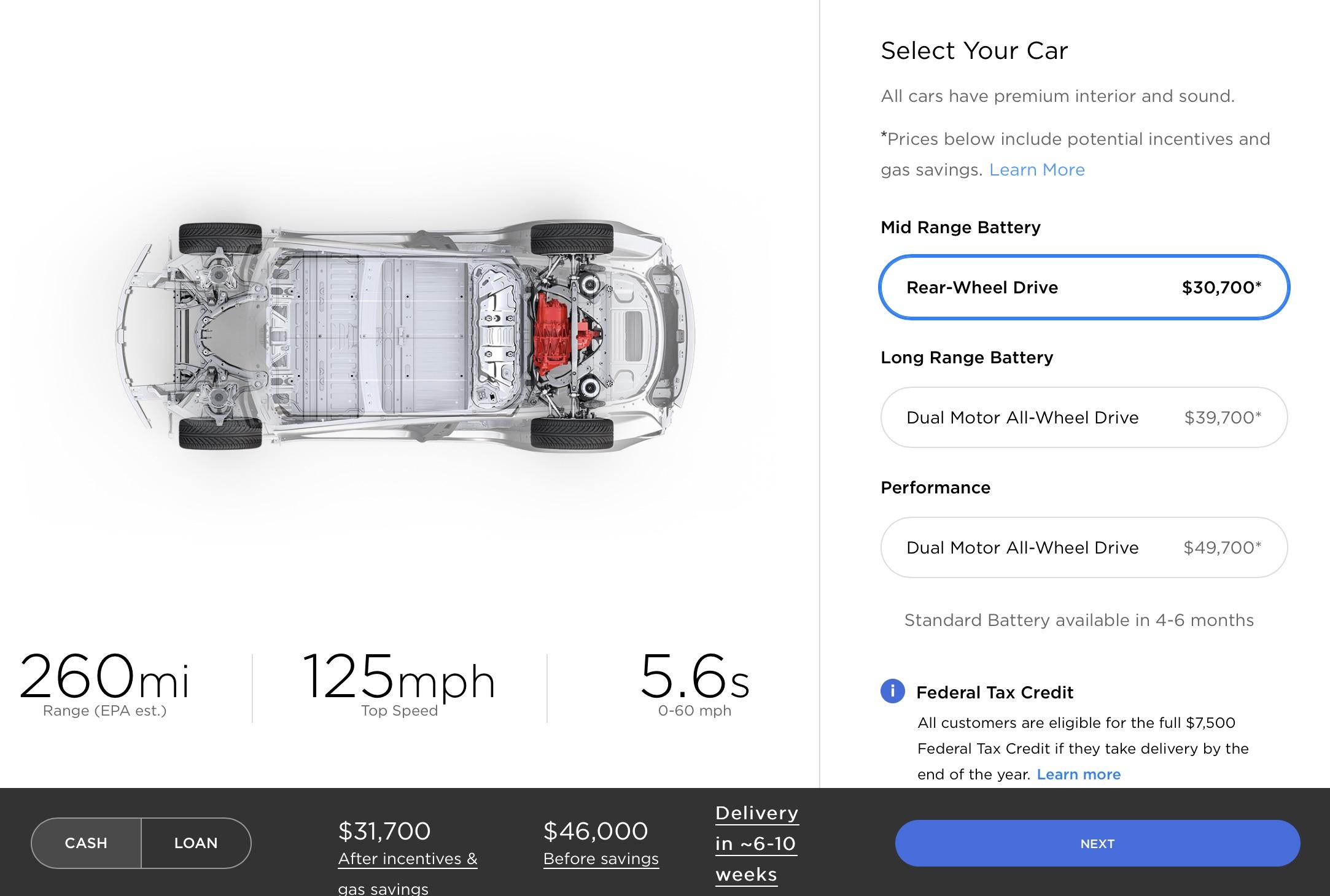 In contrast, the dual motor all-wheel drive Model 3, with the 310 mile long range battery, is expected to deliver in 4-8 weeks. It has a cash price of $54k. Previously Tesla offered that battery with the rear-wheel drive car as well, but today’s changes also put a stop to that: if you want AWD, you have to have the long range battery. [Update: According to Elon Musk, the Model 3 long range, RWD configuration “is still available for ordering off menu for another week or so.”]

The dual motor all-wheel drive Model 3 Performance, at $64k, also has an estimated delivery time of 4-8 weeks. Currently Tesla’s most powerful version of the car, it matches the 310 mile range of the long range battery, but cuts the 0-60 mph time to 3.3 seconds.

It’s a cheaper way to get behind the wheel of a Model 3, certainly, though not quite the cheapest car that Tesla promised from the beginning. That standard battery, Tesla now says, is expected to be offered in 4-6 months. At that point, of course, buyers won’t be eligible for the full $7,500 tax credit, which may well nudge some into ordering a mid-range car instead.