Tesla has begun accepting bitcoin for new car purchases, allowing buyers of its electric vehicles to use the cryptocurrency as an alternative to the usual cash, lease, and finance options. The move comes after the automaker waded into bitcoin holdings itself earlier this year, purchasing $1.5 billion worth of the cryptocurrency in February.

At the time, Tesla also said that later in 2021 it would begin offering sales of its vehicles for bitcoin too. Now, that’s rolling out, albeit only in the US to begin with. Tesla CEO Elon Musk confirmed the option on Twitter.

“Tesla is using only internal & open source software & operates Bitcoin nodes directly,” he wrote. “Bitcoin paid to Tesla will be retained as Bitcoin, not converted to fiat currency.” Availability of bitcoin payments outside of the US is expected later this year he added.

The order process remains the same for the Model S, Model X, Model 3, and Model Y. However, at the payment page, alongside the usual options there’s now a bitcoin button. Clicking that gives the option to either scan a QR code, or copy and paste the bitcoin address and exact amount required into the user’s wallet. 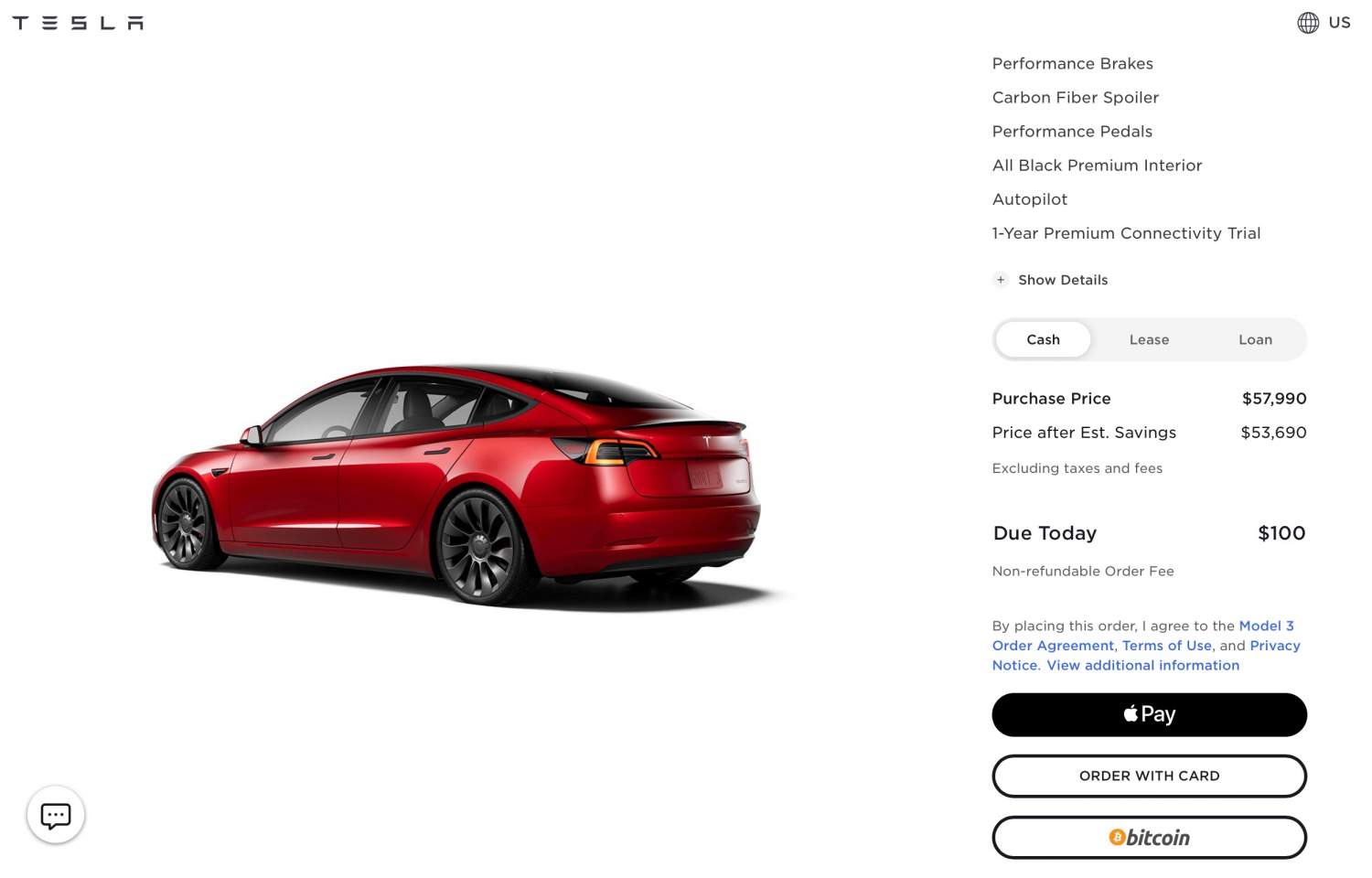 “Once you send Bitcoin from your wallet, the page will refresh within one minute,” Tesla explains. “If it does not refresh, do not send a new payment. We will email you a confirmation once payment is received. This can take up to six hours to process.”

Currently, Tesla is still using the US dollar price of its cars to work out the equivalent bitcoin amount. That conversion will vary as the value of each changes: at time of publication, for example, the $100 non-refundable order fee required for new car orders is equivalent to 0.0018376 BTC. The value will be held for a limited period, giving the user time to complete the order. However, if they wait too long, it’ll refresh and they’ll need to start over.

“Once you’re on the payments page and the timer begins, you will have until the timer expires to complete your payment,” Tesla explains. “Once the time runs out, the QR code, Bitcoin address and Bitcoin price will all expire and you will need to create a new order or return to your Tesla Account to initiate a new final payment.”

As with any cryptocurrency payment – or, for that matter, most wires of traditional currency – it’s important to make sure you’re getting the details right. Enter in the wrong bitcoin address or amount, for example, and Tesla cautions that your crypto could be lost or destroyed. Bitcoin transactions can’t be reversed, either, and any refunds it does approve could be “significantly less” than the initial value paid given the variance of the cryptocurrency’s price day to day. Sending other types of crypto to Tesla’s bitcoin address, meanwhile, could also result in them being lost.