We’ve covered a lot of Network-Attached Storage or NAS products here at SlashGear, especially as the data storage needs of people get more complicated even at home. These NAS devices can sometimes even function as your personal cloud services, which can be accessed both locally and remotely. For some people, however, the simplicity and straightforwardness of Direct-Attached Storage or DAS is more convenient and, more importantly, more affordable. TerraMaster’s D5 Thunderbolt 3 is one such DAS option in the market, and we take it for a spin to see if it’s worth the price it’s asking for.

Most external storage devices like NAS and DAS are often designed to look industrial and utilitarian. Companies that make these seem to compete on making the least offensive or distracting design possible. Following that trend, the TerraMaster D5 Thunderbolt 3, which also has the model number D5-330, has a rather nondescript design, and the only way to identify it would be from the company’s logo on its sides.

The enclosure itself feels durable with its aluminum chassis. Unfortunately, there is still plenty of plastic in key places that reveal the cost-cutting that TerraMaster chose to make. That’s especially apparent in the drive trays that break the illusion of having a high-grade external storage device in your hands. 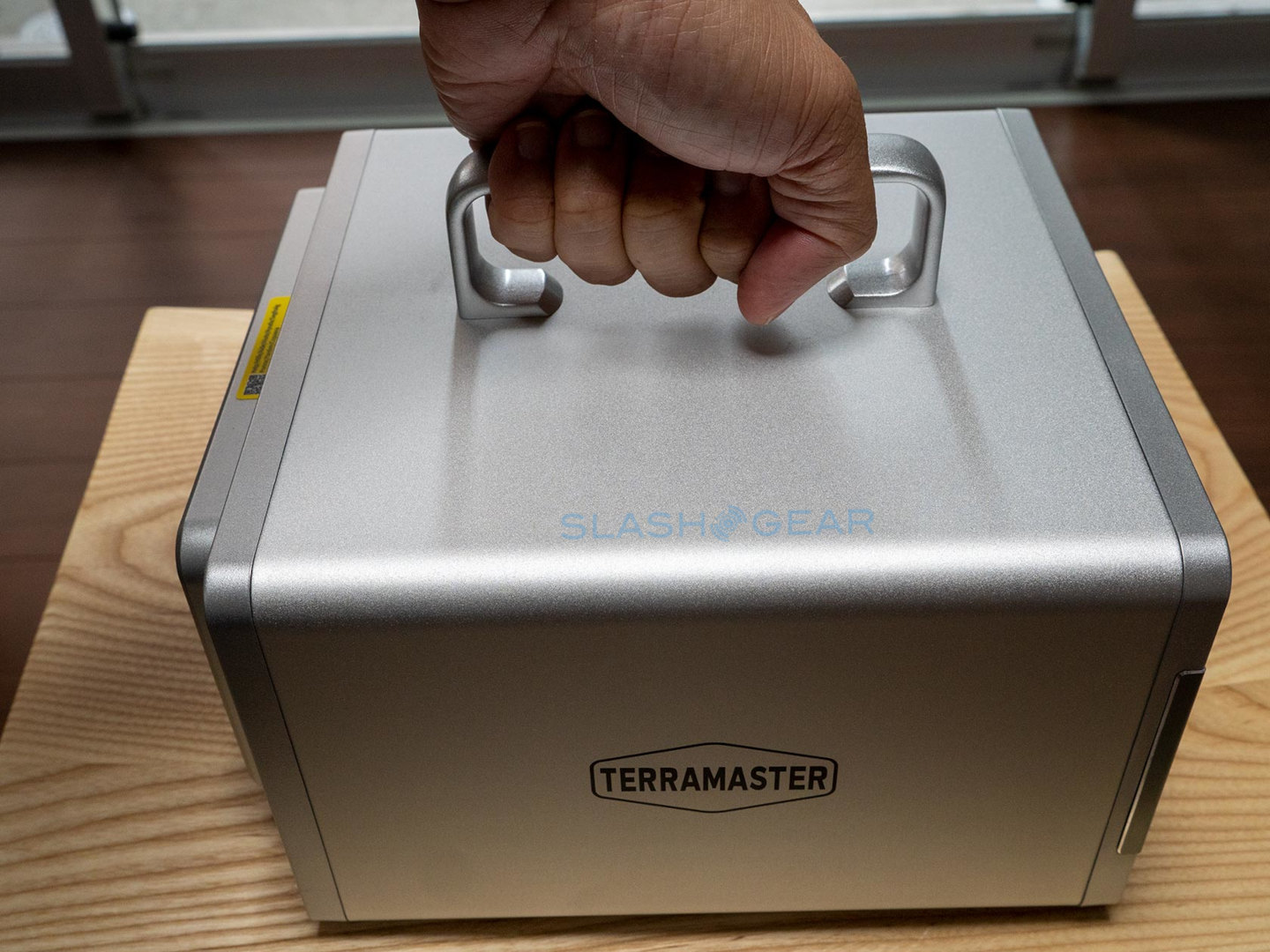 The fixed handle on top is a double-edged sword. On the one hand, it is sturdy and well-built, allowing you to carry the D5 Thunderbolt 3 around with confidence. Since it’s a DAS rather than a NAS, you’re more likely to change its location ever so often, especially to put it neared to a computer if you only have a short Thunderbolt 3 cable. On the other hand, it also takes up space, which makes stowing the box away less convenient.

One of the highlights of the TerraMaster D5-330 is something that you actually won’t see all the time because of its location. Unlike a NAS, a DAS traditionally has fewer ports, but that’s fine for the D5 Thunderbolt 3. As its name suggests, it all revolves around that connection technology.

The D5 has two Thunderbolt 3 ports on its back that allow users to daisy-chain devices to take advantage of the high-speed data transfer that this version of Thunderbolt has to offer. Ironically, the single Thunderbolt 3 cable that TerraMaster includes in the box maxes out at 20 Gb/s, not the theoretical 40 Gb/s maximum that the technology supports. Most users might not hit that cap, anyway, but it’s still something to keep in mind, especially when daisy-chaining. 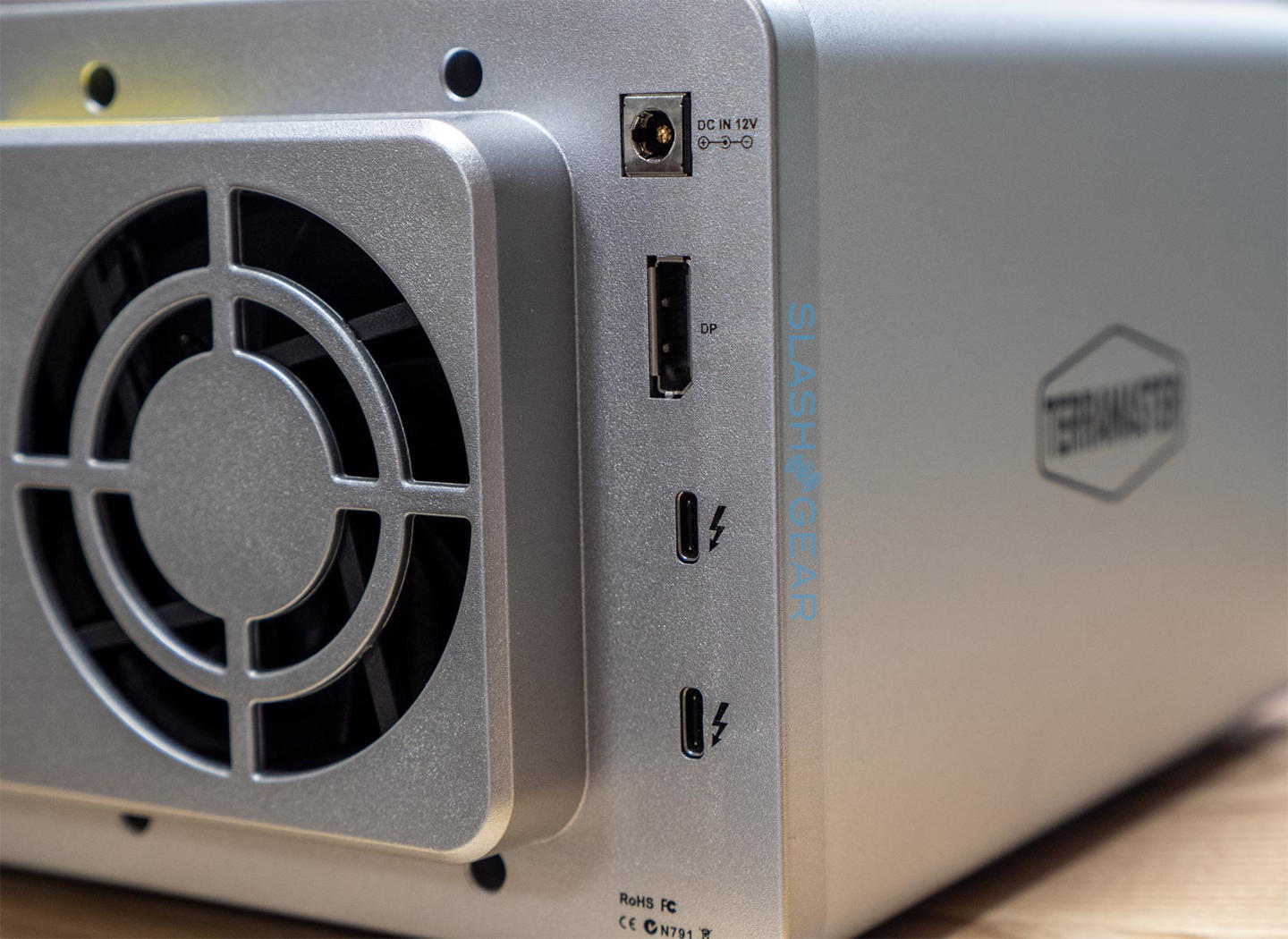 Just like the TerraMaster D2 Thunderbolt 3 we reviewed two years ago, the D5 also sports that rare DisplayPort connection that can expand the array of connected peripherals even further. That said, it only uses DP 1.2, which has support for only up to 4K resolutions, leaving those with 8K monitors a bit left out.

In terms of physically setting up the DAS, TerraMaster makes things easy by including everything you need to do it, including a screwdriver. That does, however, mean you do need tools to add or remove drives from the 5-bay enclosure. It’s not difficult, but it could be a bit frustrating for those who want to quickly swap out HDDs and SSDs.

This is also the part where the D5’s hidden plastics reveal themselves. The drive trays are made from plastic and have no locking mechanism. For the price, you might have presumed the D5 would use metal for the most critical part of the storage device, but that’s the compromise TerraMaster made. 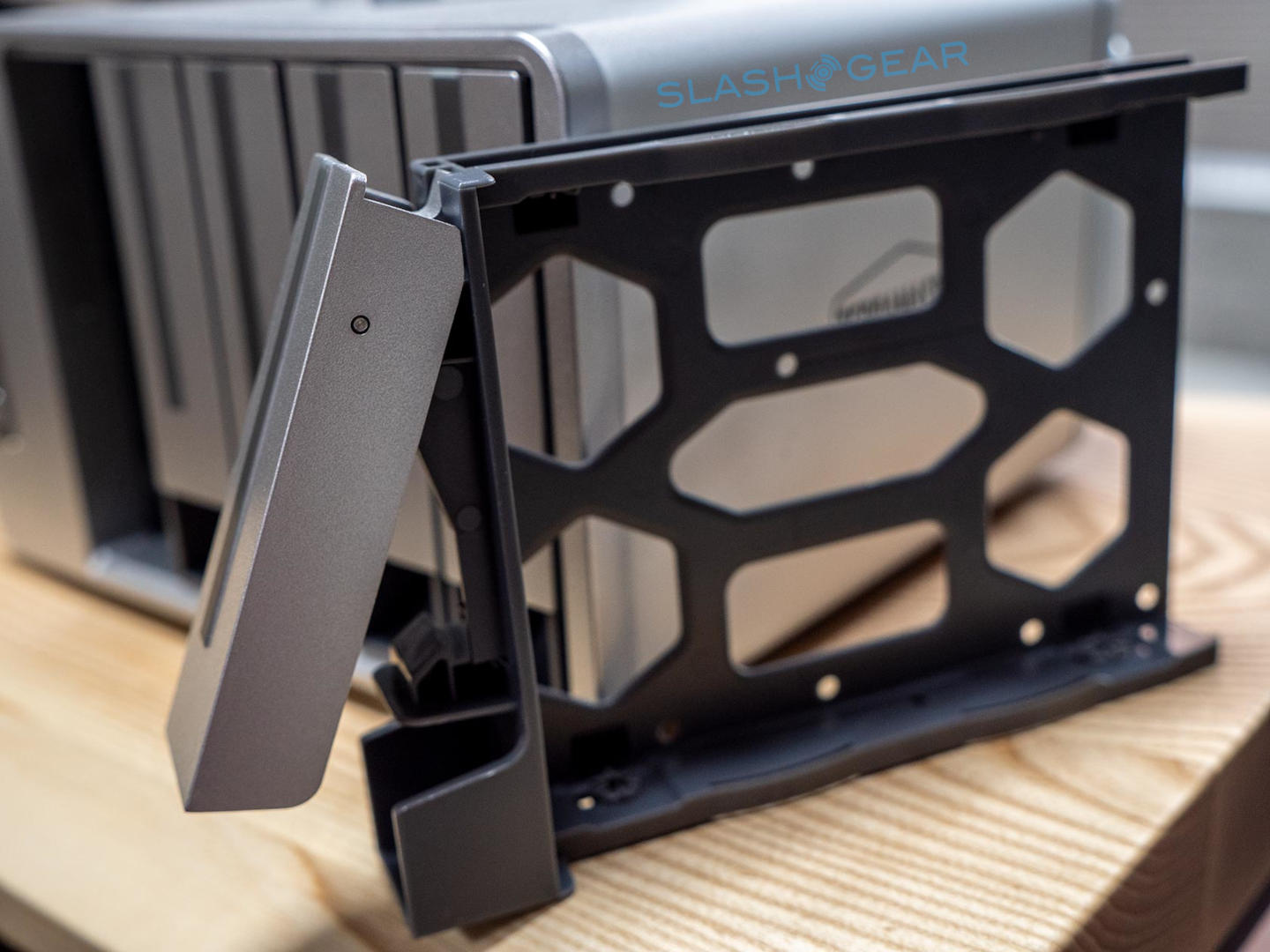 The most divisive aspect of the D5-330, however, is its RAID setup. The device supports RAID 0, RAID 1, RAID 5, RAID 10, JBOD, and single disk, and all the configuration to set those up needs to be done using software for Windows and macOS only. Unlike the D2, which has a physical dial to switch between supported RAID levels, you’ll have to pass through what looks like a very crude user interface to set up or change the configuration.

Disregarding the quality of the configuration software itself, some people are divided over whether this is an upgrade or a downgrade from a physical control. That said, it still boils down to the fact that the D5 Thunderbolt 3 does have built-in RAID that doesn’t depend on the operating system to maintain.

Just like a NAS, a DAS’ special purpose is to aggregate multiple hard drives or SSD’s together, often in a RAID configuration. While RAID comes with the promise of reliability through redundancy, there will always be some degree of impact on performance, depending on the level used.

TerraMaster advertises a read speed of 1035 MB/s and a write speed of 917 MB/s for HDDs under RAID 0. For SSDs under RAID 5, the company claims speeds of 830 MB/s and 850 MB/s for read and write, respectively. In practice, these are very generous estimates, and benchmarks showed noticeably slower speeds without being bad enough to be considered an advertising lie. Of course, there are many factors involved when measuring the performance of a DAS, including the length of the Thunderbolt 3 cable or the host computer’s specs, so real-world performance can vary wildly. 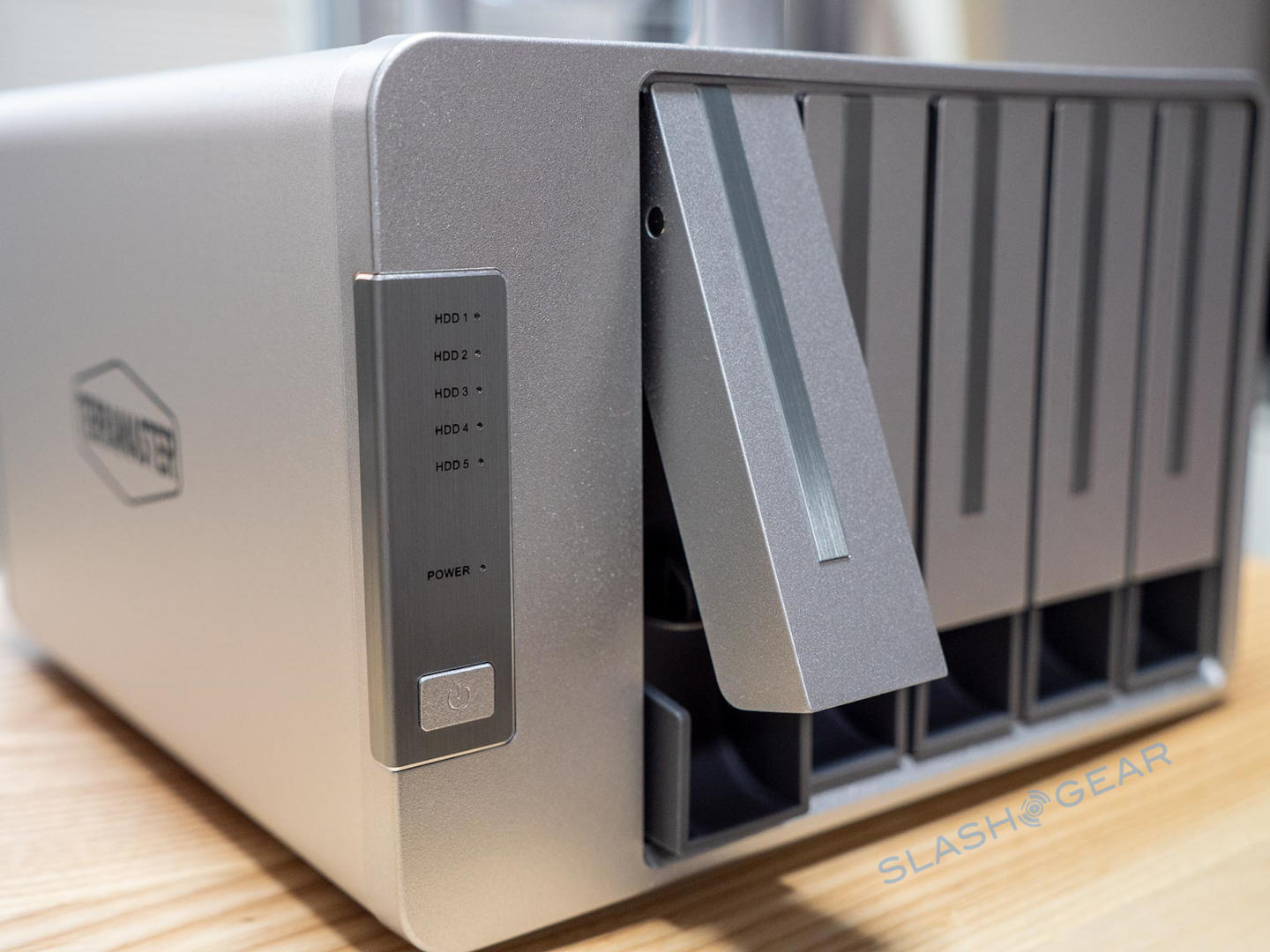 No matter the load, the D5 Thunderbolt 3 doesn’t get uncomfortably loud, especially with the fans spinning. You might hear the usual clicking noises when using HDDs, of course, but that’s on par with any enclosure using mechanical drives. Power consumption is also quite moderate, and the external power brick makes sure that it doesn’t add to the heat inside the chassis.

The TerraMaster D5 Thunderbolt 3 is a solid Direct-Attached Storage solution that offers no-frills, no-nonsense expandable storage for those with average needs at home or even at work.

The separate DisplayPort output is a big plus when it comes to a Thunderbolt 3 daisy-chain arrangement, but the software-based RAID setup is a huge letdown. While not exactly expensive for a 5-bay DAS, the $699.99 might have you thinking twice and looking around for other options, especially ones that offer sturdier materials both outside and inside.