The amount of data we generate and accumulate is sometimes too much for our laptops or even desktops to accommodate. Normal external hard drives are veritably just that, hard drives you plug in as needed. Networked Attached Storage or NAS provide some speed, reliability, and power but at the price of complexity. Enter Direct-Attached Storage or DAS like the new TerraMaster D2 Thunderbolt 3 that offer the reliability of NAS drives without the hassle nor the latency of networks.

They say looks can be deceiving and the D2 Thunderbolt 3 definitely fits the bill. At first glance, it could easily be mistaken for any two-bay NAS. That’s not accidental, of course, as the box offers the same convenience of taking out trays as NAS devices. Replacing drives, though, isn’t as quick. You’ll have to screw the drives in place for stability. It does accommodate both 3.5-inch and 2.5-inch drives and TerraMaster does provide all the tools needed for that. 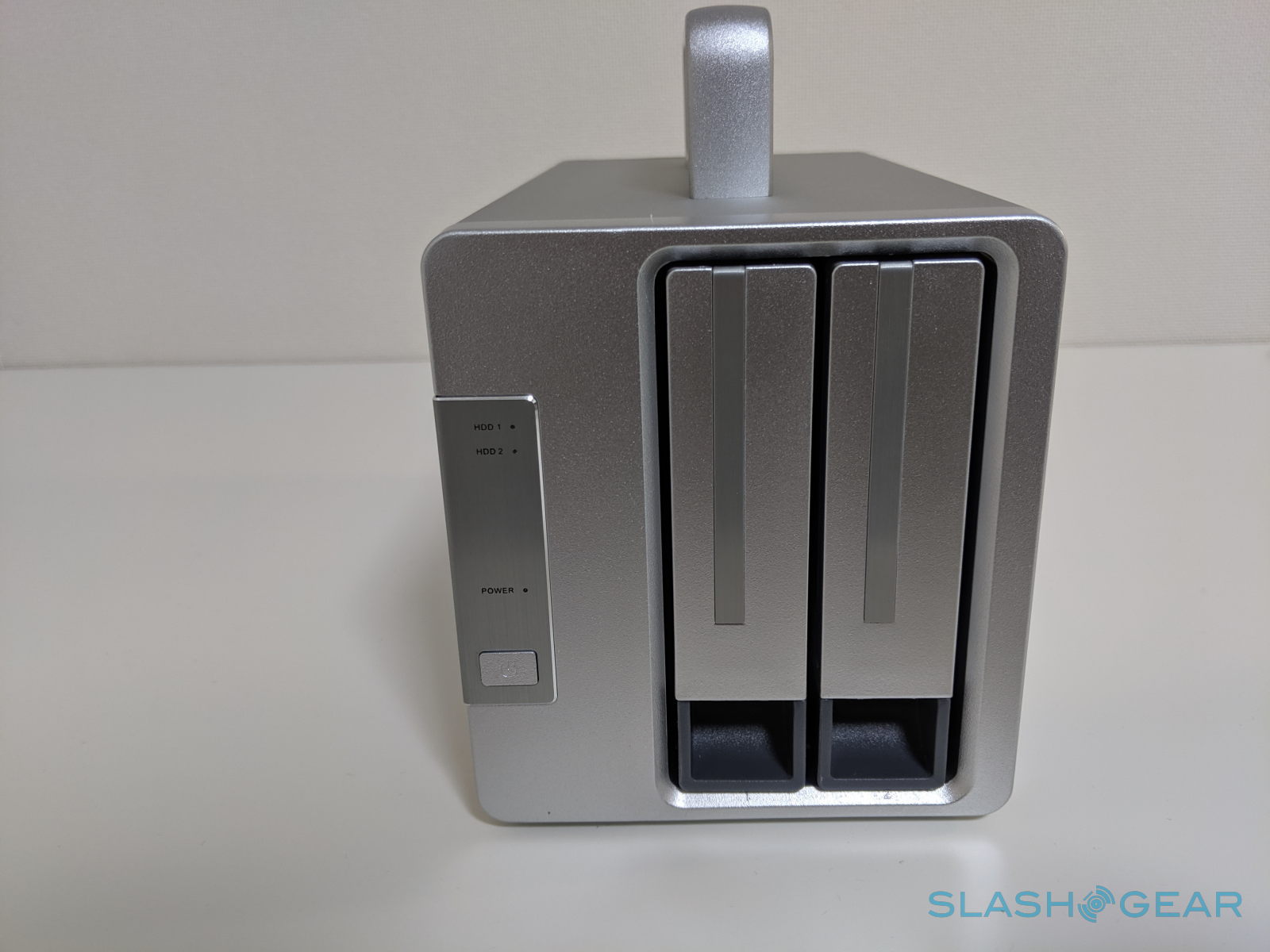 The D2 Thunderbolt 3 has a very minimalist aesthetic. A single button for the power can be found in front and three LED lights for power and the two drives. The back is equally bare, with only two Thunderbolt 3 ports, a Display Port, and power port. There is an odd switch at the bottom for changing modes. All of which we’ll cover in a later section.

One unique design feature of TerraMaster’s two-bay DAS is the carrying handle on the top. This pretty much earmarks the box as something that’s meant to be more mobile than any NAS. At the same time, you probably won’t be taking it along with you on long trips. Needless to say, it’s a nice touch to make relocating the DAS easier when, not if, needed. 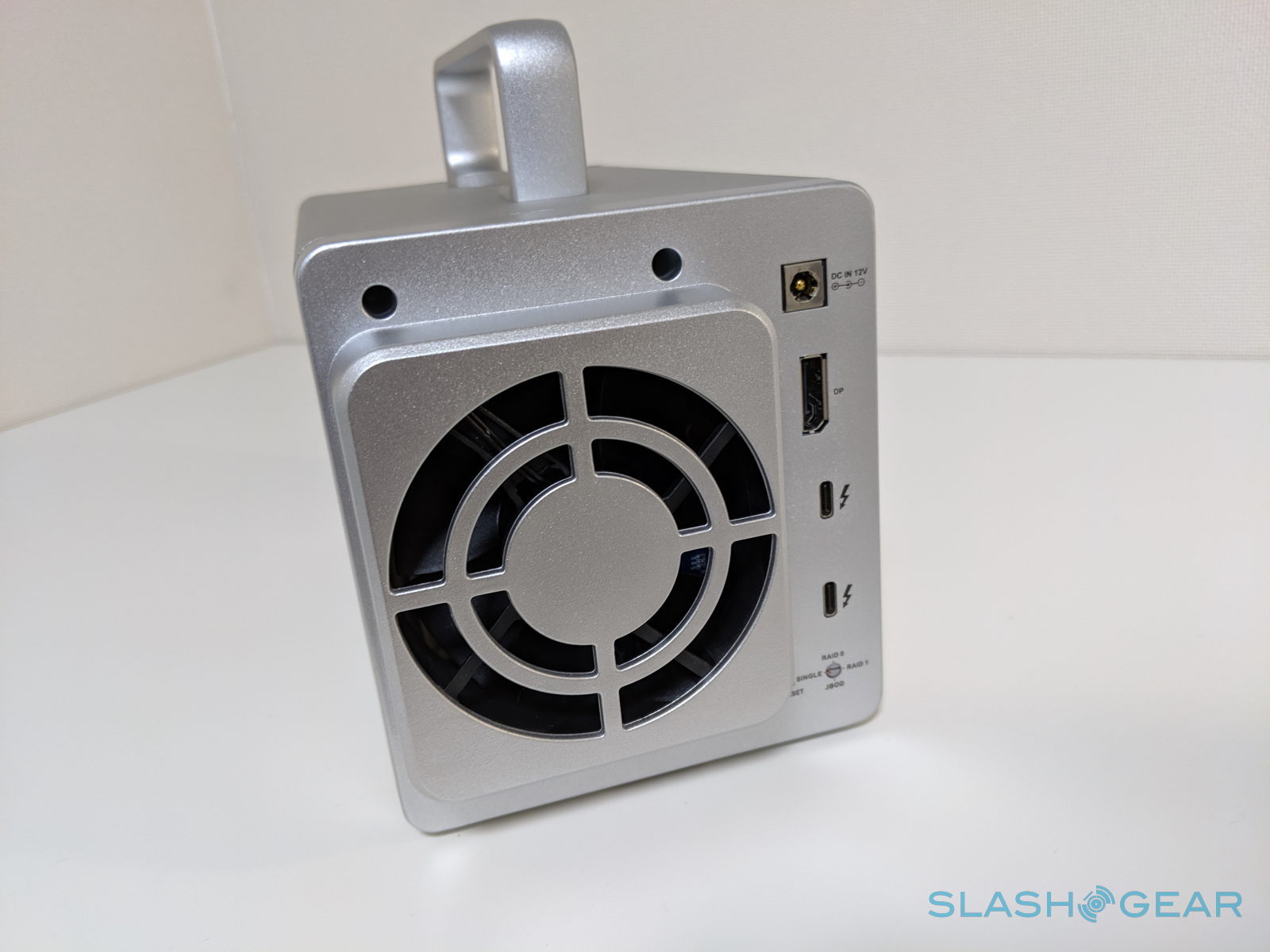 One of the advantages of a Direct-attached storage is that it isn’t as dependent on factors like network latency compared to a NAS. Considering it uses a wired Thunderbolt 3 connection, the bottleneck isn’t going to be that tunnel. This time, it will all depend on the drive itself.

The D2 Thunderbolt 3 supports almost all HDD and SSD sizes as long as they are SATA compatible. That means 3.5-inch SATA HDDs, 2.5-inch SATA HDDs, and 2.5-inch SSDs. The max capacity for each bay is 14 TB so it pretty much supports any future capacities, at least within the foreseeable future. On paper, the TerraMaster D2 advertises 760 MB/s read speeds and 390 MB/s write speeds, but that’s only using an SSD under RAID 0. 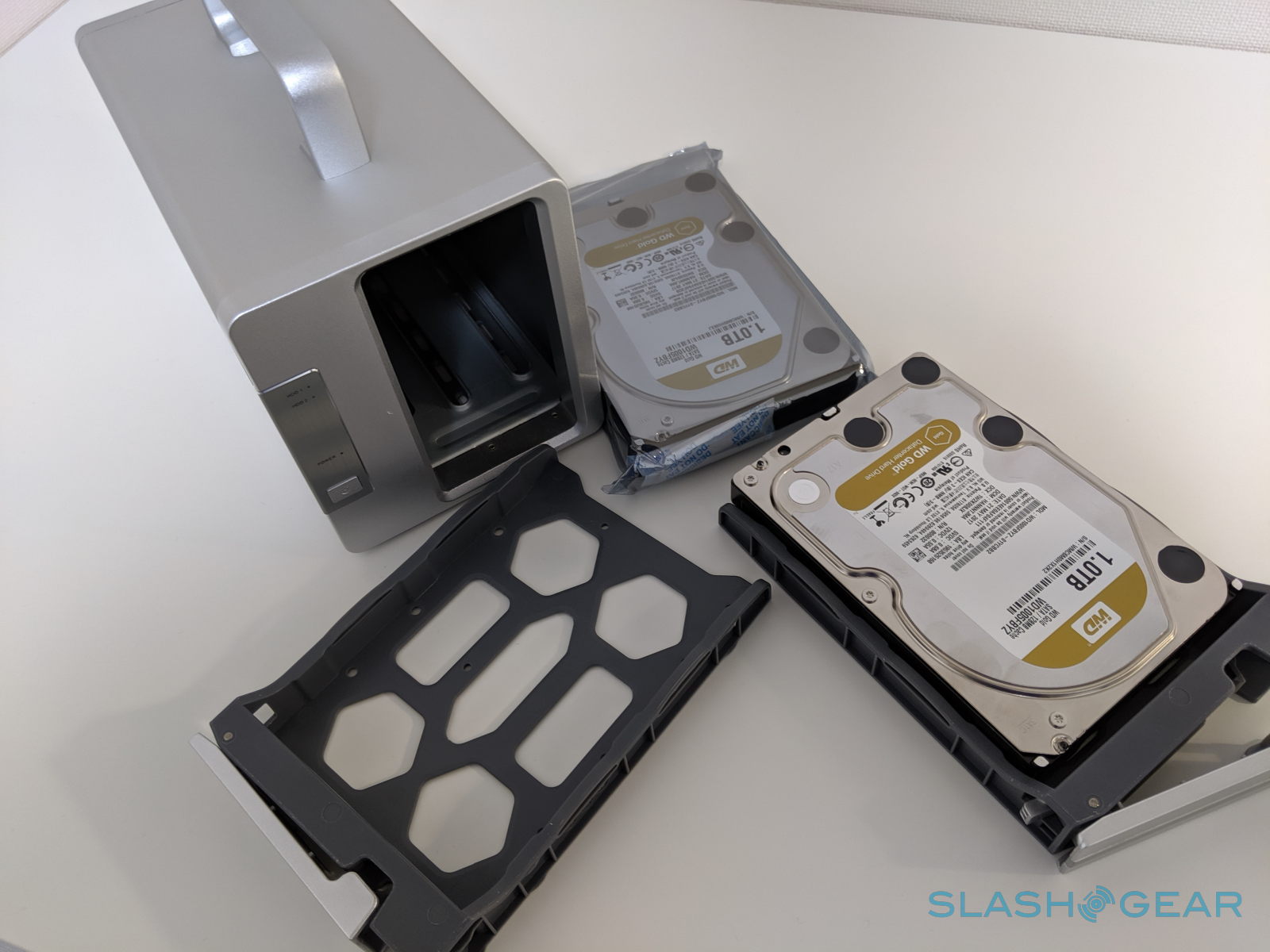 Unlike more sophisticated NAS products, TerraMaster prioritized simplicity over configurability. It only supports RAID 0 for performance, RAID 1 for redundancy, JBOD (Just a Bunch of Disks), and Single configurations. In that same vein of simplicity, there is no software or app or web UI to speak of. Switching between those modes requires turning the bottom screw on the back of the DAS and poking the reset hole. Power users may find it tedious but it’s probably an intentional failsafe feature since changing modes will wipe the drives clean.

The TerraMaster D2 Thunderbolt 3 is all about physical connections. It has two Thunderbolt 3 ports on the back, one of which you connect to your computer. Thanks to the magic of Thunderbolt 3, the other port can be used for almost anything. That means you can daisy chain other devices, including other TerraMaster DAS, to make a data storage farm. 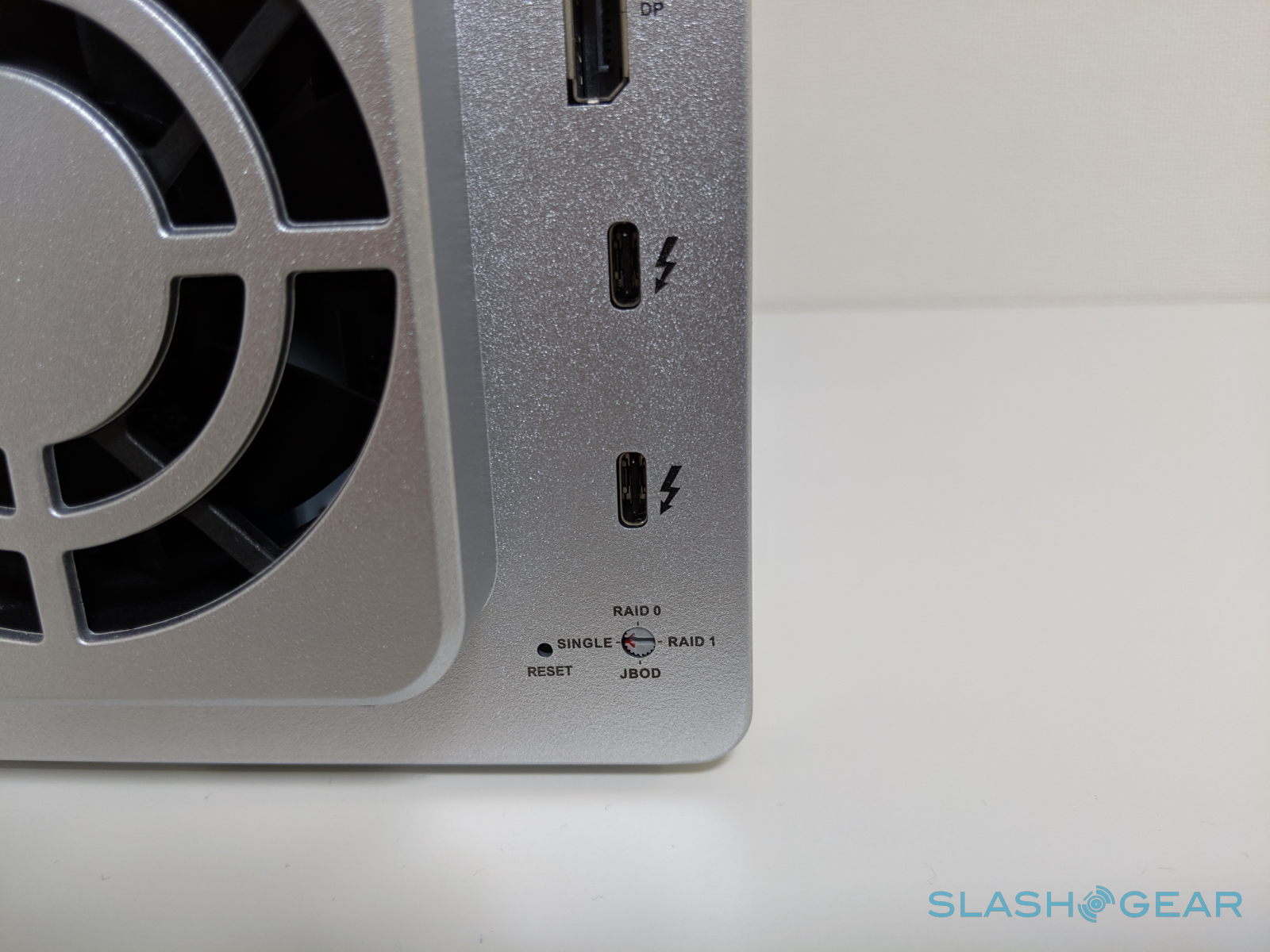 You can also use that for video output but the D2 does have a dedicated DisplayPort 1.2 port for that. So with just a single box, you can practically create a data and display dock for any laptop. 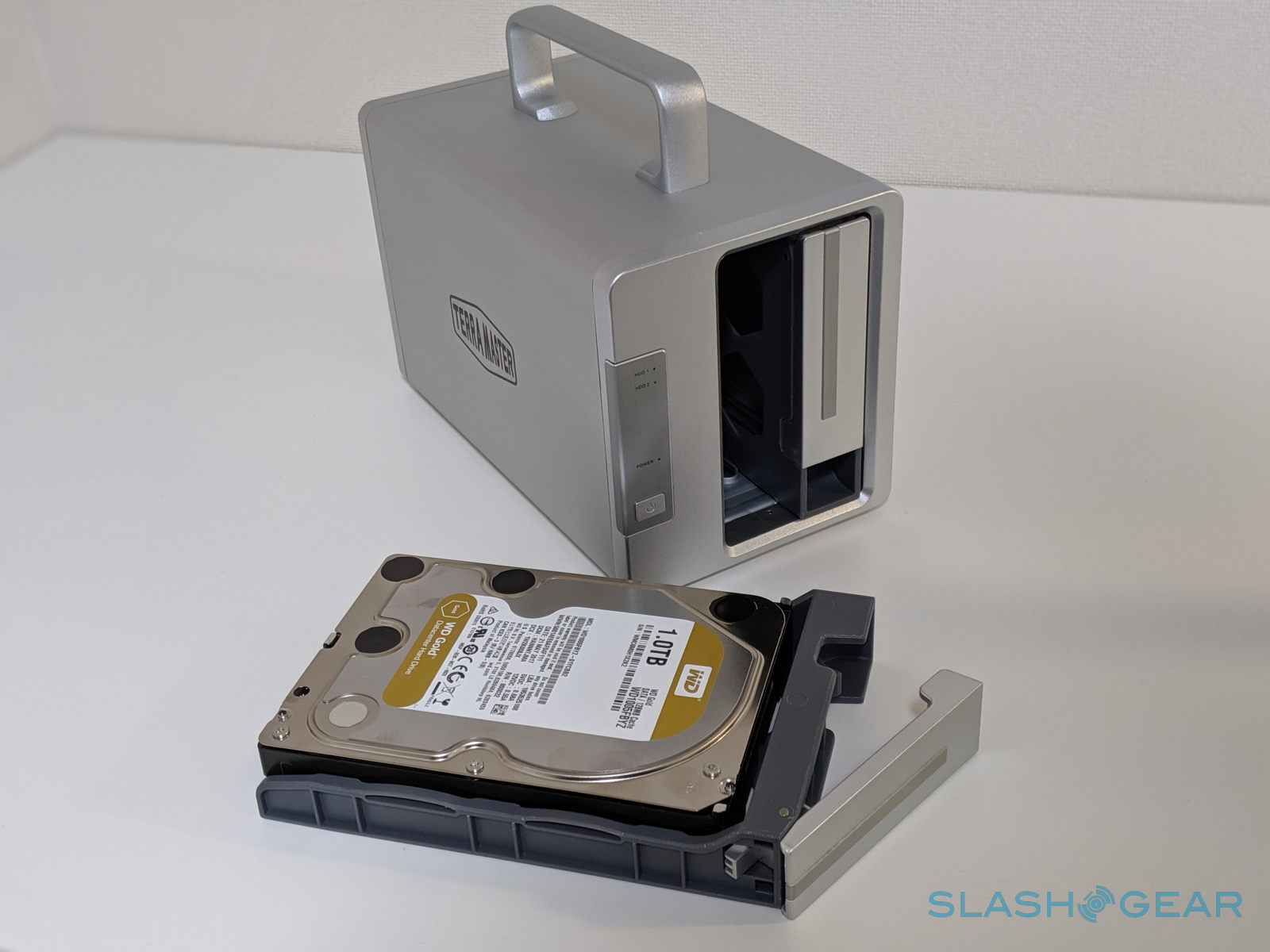 The data usage of computer users today are getting more complicated but data storage solutions don’t need to be. There will always be a class of users that will need the power and flexibility of a full-blown NAS or the dead-simple convenience of an external drive. For those that need something in between, the TerraMaster D2 Thunderbolt 3 DAS offers a sweet spot for $249.99.