We all hate change — that’s an evolutionary fact. We’re all programmed to develop habits, and when those habits are interrupted, our bodies tend to not like that. However, change is a part of life, and eventually we adapt to various changes, but some people may not want to give them up just yet. If you don’t like Gmail’s new pop-up compose window, you can actually disable it temporarily.

It’s pretty simple to do, and it doesn’t require any hacking of any sort. Google actually includes the option to temporarily disable the new view. All you have to do is compose a new email message, in which the new pop-up window will show up, and then head down to the small arrow in the lower-right corner. A drop-down menu will appear (or in this case, a drop-up window) where you’ll select “Temporarily switch back to old compose.” 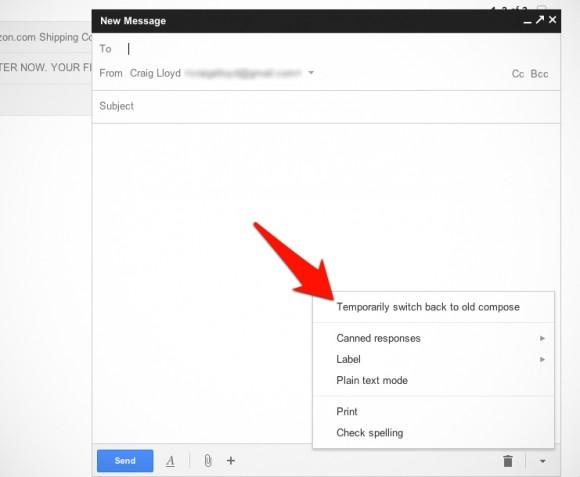 Of course, this is just a temporary measure, so we’re not sure how long you’ll be able to keep the old interface before Google permanently switches it back. They unveiled the new design back in October, where Gmail users can view their inbox and browse other emails while composing a new message without having to flip back and forth. It’s definitely a neat feature, but some users may not like it.

Just yesterday, however, the search giant flipped the switch on all Gmail users and made the new pop-up compose view a default feature, meaning that it’s now officially a part of Gmail. Then again, users are still able to go back to the old view, which has us wondering if Google is really 100% confident in the new design, and since they’re only “temporarily” allowing users to switch back to the old view, the pop-up windows feature may not be as permanent as Google thinks it is. Plus, giving users the option to go back just temporarily defeats the whole purpose of allowing that option in the first place.