This week as the fuzzy teddy bear toting R-rated Seth MacFarlane movie Ted comes out, we got the chance to interview Jenny Fulle of The Creative-Cartel, the group responsible for overseeing the visual effects for the film. As it is with many of the films The Creative-Cartel works with, Ted presented them with the challenge of creating a set of effects that were top-notch with a budget that was less than your everyday average blockbuster effects film would present. The result was no less than a perfectly legitimate looking transformation of MacFarlane to the body of a toy bear stuffed into a comedy with essentially no other visual effects to speak of. It had to look real, and it certainly does.

Before we continue, be sure to note that two studios that were responsible for the visual effects and animation — Tippett Studio and Iloura VFX and animation company – should also very much be applauded for their work on this movie. A high five to you all for a fabulous bear and a perfectly integrated character in general!

[Question] Ted is a movie that take a real-world set of characters and tosses in a character that isn’t technically real. Could you speak on what techniques you used to make that happen?

[Jenny Fulle] In our early meetings with Seth MacFarlane, who obviously also is the director of Ted, he actually wanted to be Ted. And he was afraid to do this, he didn’t want it to be cartoony, he wanted it to be real. He wanted it to be a real teddy bear that he could infuse his character into to bring it alive. So he knew when he was going in that he wanted to do motion capture in some fashion, some form or another in addition to doing Ted’s voice.

So what our challenge was, was with our budget and our timeframe for getting it done was – how could we get Seth and his mannerisms and his voice and all that, get that into Ted. And not break the bank and not run the schedule over. So what we ended up working with was the Xsens suit, the motion capture suit – it’s basically a situation where you can go with a suit or you can go with straps, and we opted for the straps so Seth wouldn’t have to be in a unitard all day long. And what we would do is we would set that up on set. So that while he was doing the voice, the lines back and forth with the actors, he could also be in the suit. We could be capturing his motion and we could then capture that and we could then feed that to the animators who could edit it in post. 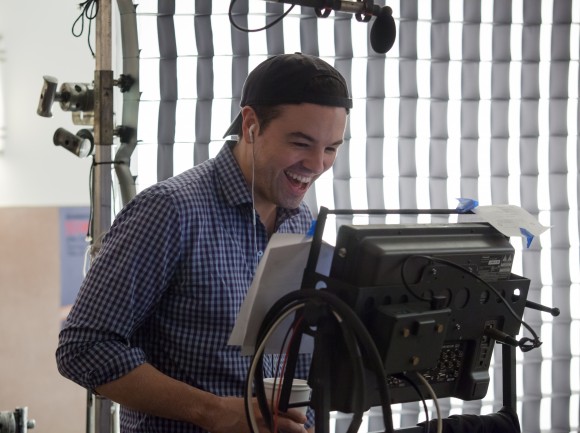 [Jenny Fulle] We really focused on motion capture from his waist up – because he has a lot of mannerisms with his hands and he rocks back and forth and moves backwards and forwards and stuff like that. What we would also do is keep a high-definition camera on his face. That way we could also capture a visual representation of what he does with his eyebrows and when his eyes go wide and that sort of thing. We would then give that to the animators so they could just manually take that look and apply it to the bear.

[aquote]He didn’t want it to be cartoony, he wanted it to be real.[/aquote]

[Q] That’s interesting – is there then a separate camera on his face at the same time as the main camera on the set?

[JF] Yeah so, he’s the director, so he’s also on the set on the set as the director and he sits behind the camera. So we put him in a suit behind the camera and sometimes we would have an over-sized bench for him to sit on that would match [the scene being filmed.] He would have a monitor where he could see the bear in the scene, he could kinda see what was going on, he could see placement, we would have eye-line set up for Mark Wahlberg and Seth so that they could both be doing their own things. And we would have the reference camera that was a high-definition camera on Seth that was behind the motion picture camera. So we were capturing all this stuff behind the scenes as we were filming with the cinematic camera that was capturing Mark. 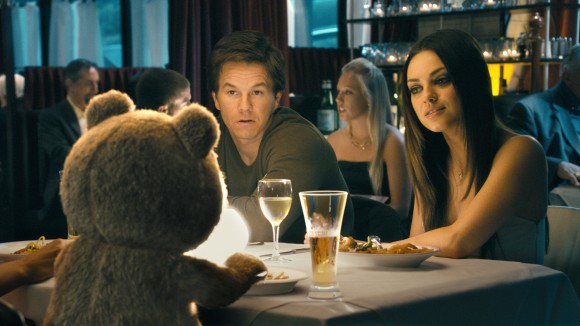 [Q] What literally was on-set with Mark? Was it just a stuffed bear the whole time, or what did that end up being?

[JF] We had a stuffed bear that we used for reference – we used it for reference for the actors and for our lighting. And then when we shot the actual plate for it, most times we would have this little rod thing that we made for Ted’s height that had two little eyes on it. So then as they were shooting a scene, Mark could look at the eyes and knew roughly were Ted was – then we would go in and remove that and put in the CG bear.

[Q] Which camera models are used throughout the film?

[JF] We used the Genesis for the film and on our stuff we had a Sony EX3.

[Q] The visual effects in this film appear to be centered around (or entirely contained within) the bear – did you work on anything outside of the bear in the film?

[JF] It’s not a “visual effects” sort of movie so it’s really that, really just the bear – anything the bear interacts with has to be CG, there are some fight scenes where we add a little bit here or there but for the most part it is the bear. 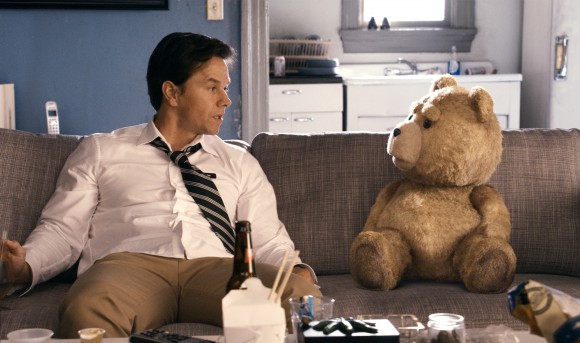 [Q] I understand you also worked on Ghost Rider [Spirit of Vengeance] – could you describe the difference between working on a movie like that where it has quite a few effects shots compared to this where there really isn’t a lot of effects shots.

[JF] At The Creative-Cartel what we’re really good at is getting films that are very ambitious in what they want to achieve, but their budgets are a little bit more modest. So we’re constantly forced to think outside of the box and think of new and creative ways to get things done – which is really fun. Ted was an example of that, we used the motion capture and sapped as much as we could to kind of lighten our load for what we had to do in post production.

In Ghost Rider we had to also deliver stereo. You can’t really deliver a conversion on fire when it’s close and medium shots and close and medium shots because it ends up looking flat. You can’t really convert and keep that kind of volumetric 3D look with particle stuff like fire. So on Ghost Rider that was the biggest challenge for us – how do we deal with that – and we ended up delivering a hybrid pipeline so that we shared work between our conversion vendor and our main visual effects vendor so shots weren’t constantly going back and forth so that we didn’t have any duplicative work which often happens in conversion. And we were able to do our conversion early so we could deliver the left-eye/right-eye to visual effects so they could do the stereo renders for Ghost Rider. A lot of – 50% of Ghost Rider is rendered in stereo even though it was shot in 2D.

We stay creatively and artistically agnostic in who we use so we’re able to work with different people on each show who are best suited for the type of work and for the filmmaker. Because you can have an Academy Award winning visual effects supervisor and if he doesn’t share the director’s vision or if they don’t get along in some way, it’s like oil and water and it just doesn’t work. So we steer clear of that so we can tailor and cast every show with the right people. 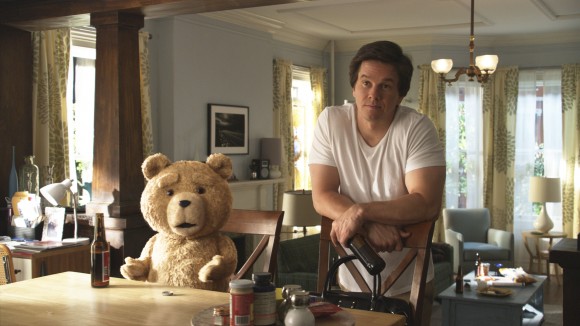 [Q] Comparing this project to blockbuster hits like Lord of the Rings with the CG character Gollum, were you expected to reach that level and outdo it, or are we at a point in the film world where something as impressive as that is just expected?

[JF] I think it depends on who your audience is. We still have these movies (that I’m not going to name because my friends work on them) that are geared towards kids, and you can get away with a lot more in terms of how photo-real they need to be because kids are more able to easily suspend their belief in reality. For Ted though, our audience is obviously a lot older audience, it’s an R-rated comedy, so we were always really clear in Seth’s directive that it had to be photo-real. You had to forget that you were looking at a visual effect. So you needed to – within the first five minutes of the film – buy that this teddy bear is real. And he just happens to talk and do all these things.

[aquote]For our film we needed to hit the top bar.[/aquote]

So I feel like – to answer your question specifically – I think it’s dependent on what the film is for what level of realism you need to achieve. I think for our film we needed to hit the top bar. If it didn’t look real all the time, the audience that’s being targeted for Ted would be distracted by the fact that the bear didn’t look real.

Catch TED in theaters across the country this weekend, and make sure you’re ready to giggle!