Over at the Bunnie Studios blog, a $12 cell phone purchased from the Mingtong Digital Mall was given a complete (and relatively simple) teardown to see what exactly goes into making such an inexpensive cell phone. Unlike the ultra-cheap handsets that are available through various carriers, such as prepaid’s Net10 and Tracfone staples, the $12 cell phone – which has no name – is completely unbranded and unlocked.

As you can see from the pictures, this is about as basic of a cell phone as you can get; it looks like a toy, almost as if it came in a child’s playset or a novelty store. It is a fully functional cell phone, however, that isn’t tied to any carriers, services, or stores. Likewise, the blogger says that the $12 price tag is for a single unit, not a bulk discount rate, and that it isn’t priced as part of any sort of promotion. Just an ordinary, very cheap cell phone. 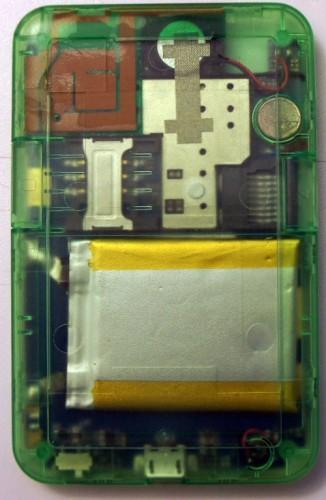 Word has it the actual construction price of the cell phone is in the single digits, meaning you’ve probably spent more on a movie ticket than it cost to make a simple cell phone. As the blogger points out, the cell phone without a name is less than half the price of the Arduino Uno while offering quite a bit more (relatively speaking) in terms of hardware. Such a conundrum prompted a teardown.

Opening the cell phone was as easy as popping its plastic apart, revealing a nearly connector-free board harboring a MediaTek MT6250DA and a Vanchip VC5276. Says Bunnie Studios, volume pricing for the MediaTek is less than $2. There’s a battery soldered to the board, as well as a Bluetooth antenna and a backlit keypad. While the teardown didn’t entirely solve the mystery of why it is so cheap, it was an intersting look nonetheless, showing that, in a perfect world with the right contacts, a simple cell phone without any plan subsidization or other factors can be assembled for about the cost of your last meal.