In late October, Verizon announced the TCL TAB Pro 5G, an Android tablet that supports the carrier’s 5G network. The tablet, as expected since the initial announcement, is based around compromise: it gives consumers 5G support at a relatively low price, but hits that lower price point by trimming some features that may ultimately make the tablet less appealing to consumers.

Verizon 5G on a tablet

There’s no shortage of Android tablets on the market, but TCL’s new TAB Pro 5G is a bit of a rarity as it includes support for Verizon’s nationwide 5G and ultra wide-band 5G networks. The tablet manages to offer 5G access at a price that most consumers will find comfortable.

The TAB Pro 5G has a full retail price of $399.99 USD, though many consumers are likely to get the tablet under Verizon’s device payment plan. Those who choose the latter option will pay $16.66/month for 24 months or $13.33/month for 30 months on top of their monthly wireless service bill.

What makes it special?

Many of the tablet’s features are fairly standard, including 64GB of storage and 4GB of RAM, Qualcomm’s Snapdragon 480 5G chipset with an octa-core processor, a microSD card slot with support for up to 1TB cards, dual-band 802.11 a/b/g/n/ac WiFi, and Bluetooth 5.0. TCL rounds out its product with some more notable features, however.

TCL packed a 10.36-inch Full HD+ display with NXTVISION in the TAB Pro 5G, offering “HDR-like” quality, according to the manufacturer. The slate has a decent 60Hz refresh rate and a comfortable 5:3 aspect ratio. The screen is very bright, unlike many lower-end tablets, plus the colors are deeply saturated, offering a nice experience when streaming Netflix or watching YouTube videos before bed. 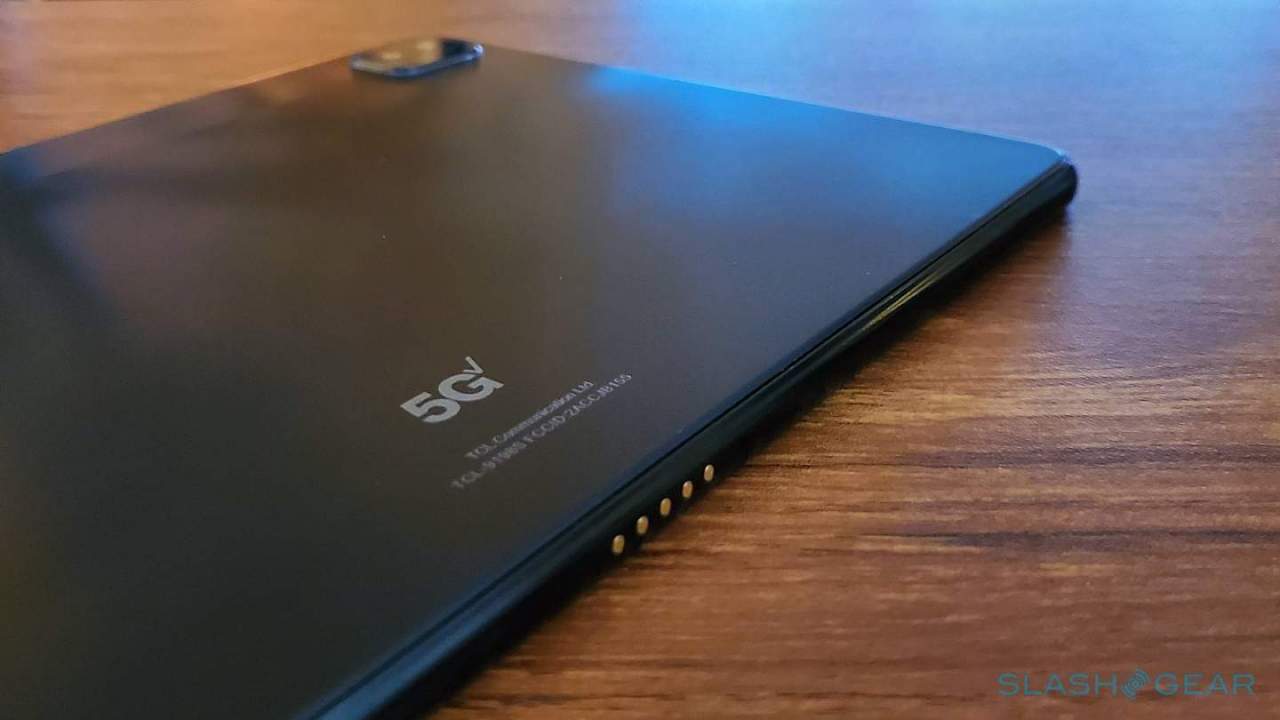 The tablet is very lightweight at a bit over a pound, but it still manages to pack an 8,000mAh battery that includes reverse charging via USB-C, effectively allowing the tablet to function as a power bank for charging earbuds or other gadgets while away from a convenient charging source.

The battery can be fully charged in less than four hours when an 18-watt fast charger is used. Assuming the tablet isn’t used as a power bank and the Battery Saver mode is turned on, users can expect up to around 17 hours of runtime before the tablet needs to be plugged in. Battery life in Standby Mode is substantial at around 25 days with a full charge. 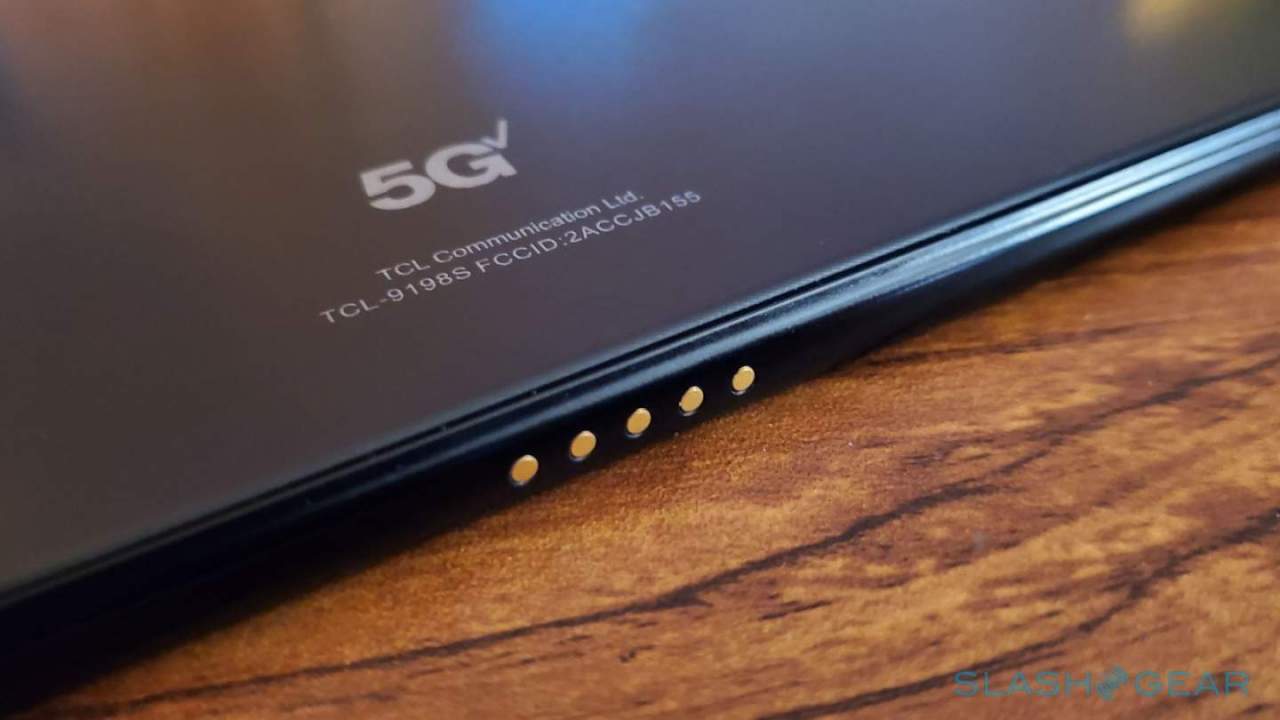 The extensive standby time makes the tablet particularly useful for travelers who may stow their tablet for long periods of time during flights and meetings, helping ensure the battery won’t be too low by the time the slate is needed. The ability to use the tablet as a power bank is also extra useful for travelers, enabling them to, for example, keep their phone running at the airport when all of the outlets are in use.

Other notable features include a fingerprint sensor that is baked into the power button, making it possible to turn on and authenticate the device at the same time. The model likewise packs Face Unlock for unlocking the tablet by looking at the display. Beyond that, Verizon customers can also use the TAB Pro 5G to share their ultra-fast broadband connection via hotspot with up to 10 devices.

Though most people will snap pictures and record videos with their smartphones — the majority of which have much better cameras than those offered by tablets — these slates are useful for video calls. TCL acknowledges that by packing an 8-megapixel front-facing camera into the TAB Pro 5G, as well as a 13-megapixel rear camera. 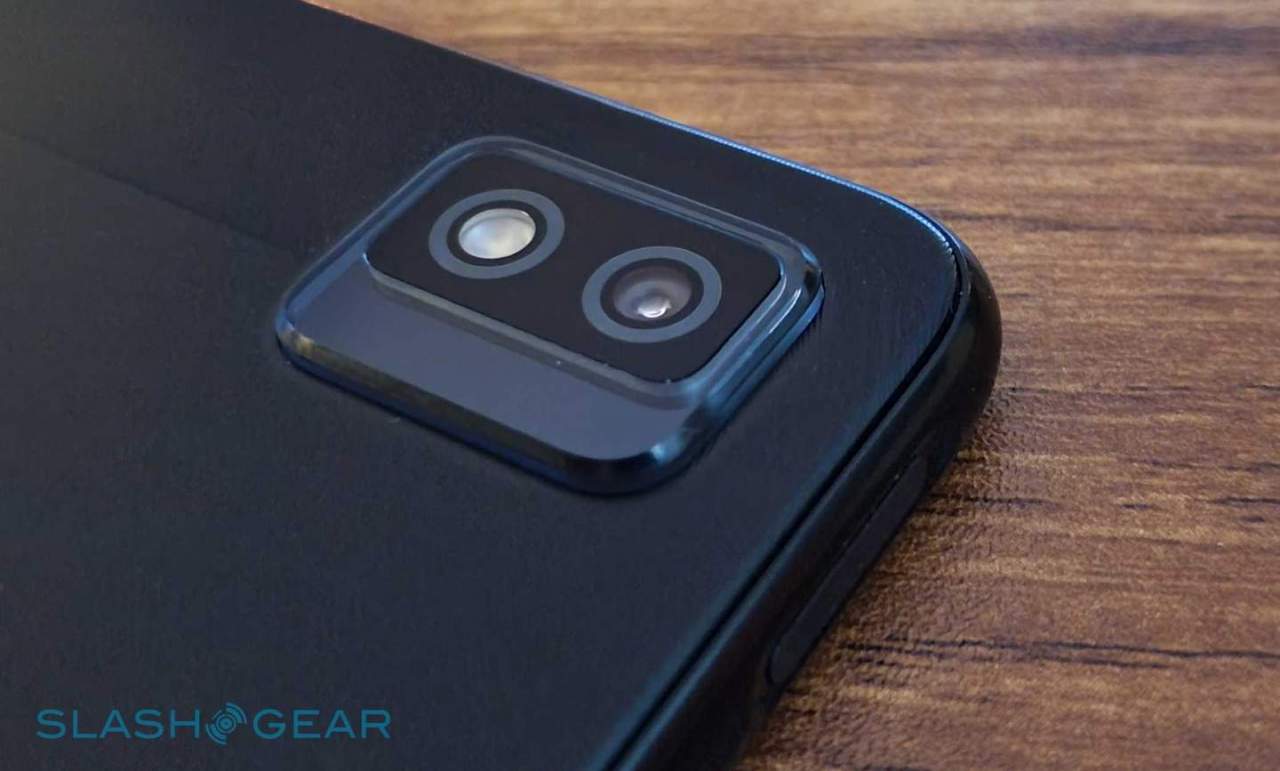 The TAB Pro 5G’s front camera includes an LCD flash, as well as filter modes for video, which can be recorded at 1080p/30fps. The tablet’s rear camera is a bit more robust with an LED flash, panorama support, Stop Motion mode, image filters, and video filters. Overall, the camera options are fairly robust for an Android tablet and could be useful for snapping quick pictures of receipts and documents in addition to video calls.

The TAB Pro 5G’s performance during everyday usage is a mixed bag. Even with the Battery Saver mode disabled, the tablet will sometimes experience lag when performing the most basic tasks, such as pulling down the notification panel or swiping left and right between screens. At other times, the tablet’s performance is smooth and seamless. This occasional lag appears even after a reboot when no apps are running. 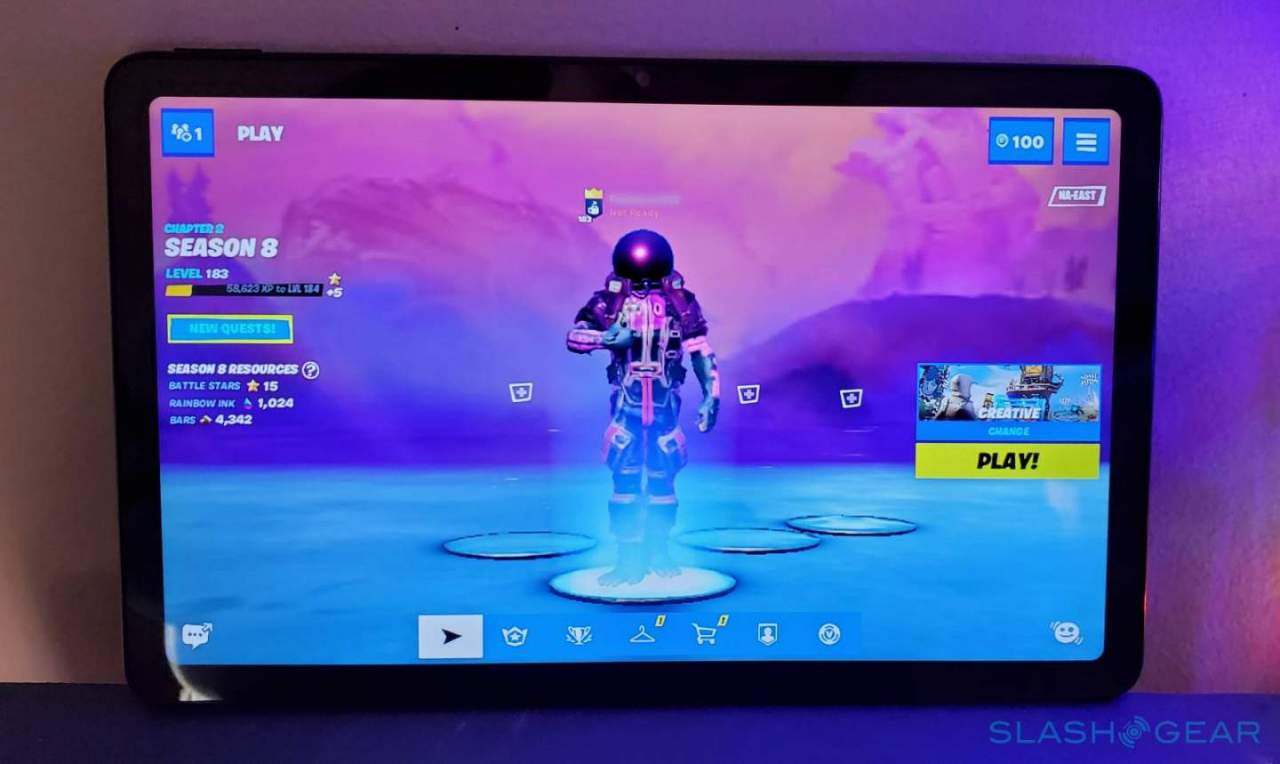 With that said, the lag issue doesn’t present itself when, for example, streaming videos on YouTube, playing mobile games, or surfing the web. I was able to play PUBG Mobile and Fortnite Mobile on the tablet without any performance issues, the terrible graphics quality aside.

When paired with the screen’s deeply saturated colors and the dual speakers’ robust audio (when it comes to tablets, at least), the TAB Pro 5G’s mobile gaming capabilities were surprising — just don’t expect any sort of decent graphics quality if you’re planning to play demanding games like Call of Duty Mobile.

Is the tablet worth it?

If you’re looking at the TAB Pro 5G, your primary focus should be the Verizon 5G connectivity — and whether you actually need this feature to meet your needs. The first thing prospective buyers should do is head over Verizon’s coverage map and determine whether they live (or often travel to) somewhere that has 5G coverage. The second thing to pay attention to is the distinction between Verizon’s 5G nationwide network and its 5G mmWave network.

The latter network offers faster speeds but is only available in select big cities around the US. Living in one of these cities doesn’t necessarily mean you’ll be able to access the 5G Ultra Wideband network in your home. For example, I live in Columbus, OH, which is one of the cities with Verizon’s 5G Ultra Wideband.

However, in the practical sense, I don’t have access to this network, as it is limited to only select spots throughout the city. As a result, the speeds I get in my apartment aren’t anything to write home about — in fact, they’re no better than the speeds I get over the 4G LTE connection on my phone.

With this in mind, consumers need to evaluate whether the TAB Pro 5G meets their specific needs at this particular point in time. Verizon will slowly expand access to its 5G Ultra Wideband network, but it may be a while before many consumers have access to it with any sort of regularity. The 5G support is handy for someone who, for example, regularly attends conventions or other events at big venues that are likely to have 5G mmWave coverage.

For the average person who wants to be able to get online from their local Starbucks, however, there’s little reason to choose the TAB Pro 5G over other current tablet options even if they’re limited to 4G LTE — the speeds are likely to be around the same, depending on location, and there are better tablets on the market for around the same price. 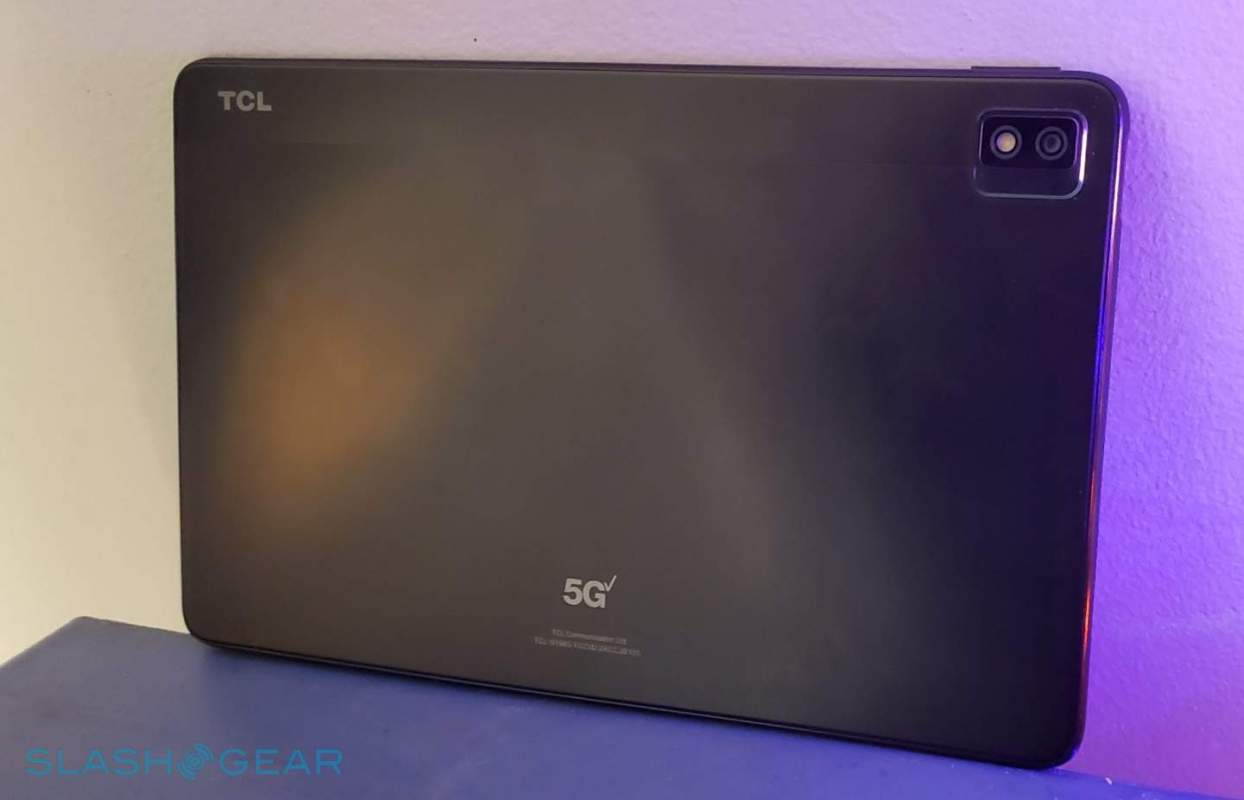 For consumers who are willing to spend a bit more, for example, the 2021 iPad Mini offers 5G support alongside far better performance with a starting price of $649 USD. Consumers who are dedicated to the Android platform can instead check out Samsung’s Galaxy Tab S7 FE, a 12.4-inch tablet that can be purchased with Verizon 5G support with a starting price of $670 — a figure that drops to $520 if the buyer has a trade-in device.

This isn’t to say that TCL’s 5G tablet is a bad option, but it is one that only slightly undercuts significantly more powerful and well-made competing models. Add in the fact that Verizon’s 5G network — in its present state — may be underwhelming, and it’s a very real possibility that consumers will ultimately be disappointed choosing the TCL slate over a somewhat pricier and far more capable alternative.

The TAB Pro 5G’s inconsistent performance detracts from the tablet, which is ultimately a very basic Android slate targeted at consumers who need a companion device for casual tasks and entertainment, not a workhorse that can be used to get significant work done on the road or at the local coffee shop. The only thing setting TCL’s new model apart from other Android tablets with similar performance is the support for Verizon’s 5G mmWave network, the large battery, and the reverse charging support for topping up gadgets.