How often do you download a song without previewing it first? If it is an artist you’re fond of, the odds are likely high, as you figure it’s something you’ll want in your collection. We have to assume that is the reason behind what happened in Canada recently, where a newly released Taylor Swift song hit the #1 slot…even though it was only 8 seconds of loud, obnoxious static. It’s either that, or our Canadian friends have a rather eclectic taste in music.

Less you think Swift is exploring some new artsy forms of music, it is important to note the song release was a mistake. Some glitch, it seems, resulted in a song titled “Track 3” from the 1989 album to be released on iTunes in Canada. The problem is that it wasn’t a song, but instead about 8 seconds of static. 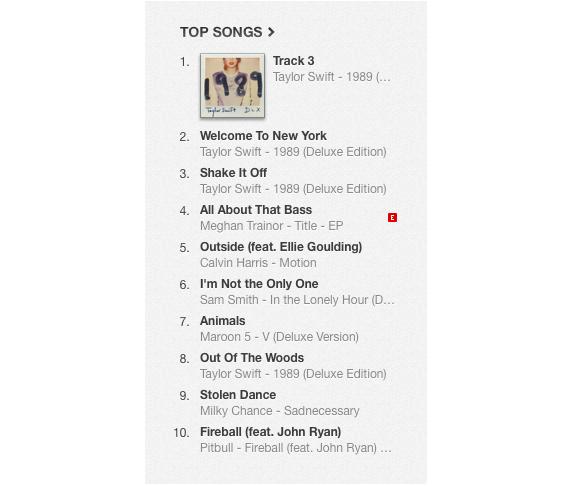 As you can see in the screenshot above, that didn’t stop users from downloading the song — and not just a few downloads, mind you, but enough to catapult the track to the No. 1 slot amongst the digital wares, eclipsing “Welcome to New York” and other tracks that are, you know, not static.

The track cropped up this morning, and it remained for a good while after going viral. If you’re a Canadian user and you downloaded the song earlier today, don’t forget to purge it, otherwise you’ll have 8 jarring seconds during your otherwise glitch-free listening sessions.