SyncPhone runs full Windows 10, sounds too good to be true

Microsoft‘s promise in Continuum definitely has appeal. Turning your smartphone into something of a portable desktop PC is a dream come true for many. For some, however, Continuum is a half-baked promise, limited to using only the “Universal Windows Apps” and leaving thousands of “legacy” win32 software out in the cold. Now a group called Nurve is taking the concept to its logical conclusion: the full desktop version of Windows 10 on a smartphone, no holds barred. The catch? It’s still in its crowdfunding stages.

The limitation of what apps can run on Windows 10 Mobile devices is both technical and arbitrary. The technical side is determined by the processor architecture, ARM on smartphones and some tablets versus x86/x64 on desktops and laptops. The arbitrary part is set by Microsoft, because of the work involved in porting apps (if necessary) as well as to push its own universal app platform forward.

In theory, there should be no problem running a full Windows 10 desktop on a smartphone, especially one that’s actually running on an Intel, ergo x86/x64, processor. That is the theory that Nurv is putting to the test with its SyncPhone smartphone. Three models of this smartphone is being offered as reward tiers on Indiegogo, all of them running on an Intel Atom, either an x5 or an x7. RAM goes from 2 GB to 8 GB while storage goes from 32 GB to 128 GB, depending on the model. The middle SyncPhone S and high end SyncPhone Pro also tote styluses, complete with silos for stowing them inside the phone. They even have built-in origami-like kickstands! 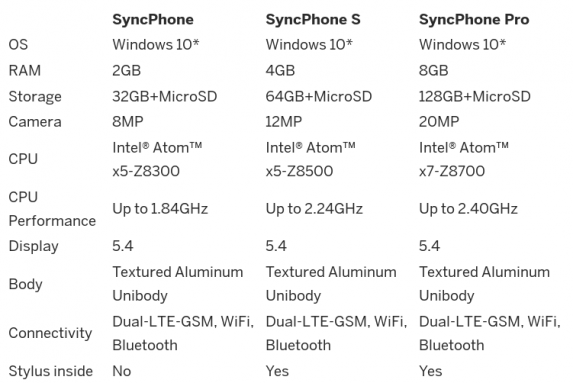 If an Intel Atom x7 smartphone with 8 GB of RAM and 128 GB of storage doesn’t sound incredible enough, the fact that these smartphones are running Windows 10, not Windows 10 Mobile, might be. In fact, considering the device makeup, they can even run Android or any Linux distribution if so desired. Again in theory, this means you really do have your PC in your pocket, at least a PC that’s as powerful as the least powerful budget laptop or Intel tablet. You won’t have to make a choice between “Modern” Windows apps and regular Windows apps.

In practice, however, the concept might break apart easily. The smartphones’ 5.4-inch HD displays don’t really lend themselves easily to desktop interfaces. It could work with an external monitor ala Display Dock, but the campaign makes no mention of such a setup, not even HDMI out capability. And it doesn’t really solve how you’ll be able to use it as a phone, especially as Windows 10 is currently not yet conducive for telephony beyond VoIP like Skype. You could probably dual boot to Android for such, but that only adds another layer of pain.

The SyncPhone is an enticing idea that might strike a chord in the hearts of many tech lovers, especially road warriors, but exposition, not to mention execution, leaves a lot to be desired. The fact that it is coming from a group never heard of before doesn’t exactly inspire much confidence either. Ubuntu, which has a lot more clout, had the exact same idea and went the exact same crowdfunding route but ultimately failed to amass the millions it was banking on.