A lucky coincidence between two satellites, one close to plunging back into the Earth’s atmosphere, has identified a third radiation belt around the planet, which NASA says will change our understanding of the sun and how the universe’s forces work. While two of the Van Allen radiation belts have been known since 1958, the discovery of a third belt – which appeared unexpectedly, and lasted for four weeks in all – led scientists to first doubt the instruments on the freshly-launched Relatavistic Electron Proton Telescope (REPT), and then to realize that they were seeing something no researchers had ever observed before.

The REPT’s activation was, in some ways, a happy coincidence, with the team responsible for it being given permission to activate it early so that its results would coincide with the soon-to-be-decommissioned SAMPEX (Solar, Anomalous, and Magnetospheric Particle Explorer), which would soon de-orbit. After just five days of monitoring, the REPT team spotted a third radiation belt forming, a previously-unseen phenomenon.

Although the initial two belts were identified several decades ago, scientists still aren’t clear on what mechanism they operate by. Solar storms can trigger the vast swathes of radiation, but the connection between the two is confusing, with what looks to be the same activity on the sun causing different reactions in the radiation belts. 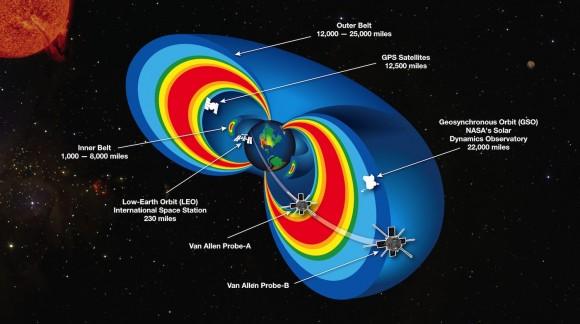 “We’ve never been in the very throat of the accelerator operating a few hundred miles above our head,” REPT principle investigator Daniel Baker said of the satellite’s data, “speeding these particles up to incredible velocities.” Previously, SAMPEX only gave researchers a view from below, whereas the REPT will dive far closer into the radiation belts themselves.

One possibility for the creation of the third belt is that a vast filament of solar material that erupted from the sun on August 31, 2012, could have triggered it, while a subsequent wave from the sun a month later could have extinguished it. The Van Allen Probes mission will run for two years.