Arguments over which superhero would win in a fight are as old as time itself. Cyclops vs Iron Man; Green Lantern vs The Flash; Hulk vs Deadpool; Spider-Man vs Wolverine; and, of course, Superman vs Batman. But what deciding on the single best superhero out of everyone? Students at the UK’s University of Leicester have spent seven years researching and applying science to the debate to come up with an answer. To little surprise, it’s Superman (sorry Batman).

I’m not sure all this research and analysis really needed to take seven years, but the students involved came up with a detailed chart, which you can see below, comparing superheroes’ strengths and weaknesses. In the end, Superman was identified as the “best-equipped” thanks to powers like high velocity motion, high energy output, super strength, ability to exert great force, ability to travel safely, and more.

Batman, while many a fans’ favorite, came in last place, largely to due to his non-super humanness. The Gotham hero has no actual powers, and suffers from critical weaknesses like unsafe means of travel and a high potential for his abilities or actions to harm himself.

Iron Man, while also lacking powers of his own, ranks just slightly better thanks to his “protective exoskeleton.” His inability to withstand high impact force is a big minus, along with his huge ego, of course.

Other top-tier heroes that scored well but still came in under Superman include Wolverine, earning big points for powers like quickly regenerating health, exerting great force, and his reinforced skeleton; Thor, one of the few heroes with no listed weakness, comes close to Superman’s score with similar abilities like explosive powers and high energy efficiency. 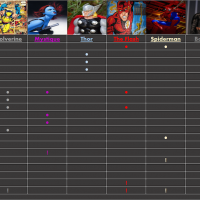 Towards the middle we see the X-Men’s Mystique, with her abilities to manipulate genes and disguise herself, while at the same time having the potential cause multiple diseases; Spider-Man find himself here as well, earning points for high velocity motion and “durable accessories,” but getting docked for unsafe means of travel and the potential to harm himself.

While all this research is highly subjective, the students involved did put a generous amount of effort into their theories and calculations, and their papers explore the physics involved in analyzing the powers and abilities seen on the pages of comic books.