Super Mario 3D World + Bowser’s Fury Review: A ton of fun, but it still costs too much

Stop me if you’ve heard this one before: A huge multinational company launches a game platform that’s an abject failure, drops it after just four years on the market, and then launches a new console that turns out to be a huge success. It takes all of the old first-party games it released on that previous console, which all had very limited audiences thanks to poor console sales, and re-releases them on the new, much more successful console for full price despite the fact that they’re all years old at this point. There is no punchline.

Bringing old Wii U games forward to the Nintendo Switch has been Nintendo’s modus operandi since shortly after the Switch launched, with Nintendo kicking things off with Mario Kart 8 Deluxe. Mario Kart 8 Deluxe has gone on to be one of the best-selling games on the Switch (and, in fact, before Animal Crossing: New Horizons came around, it was the single best-selling game on the Switch), and from there, the classics just kept coming forward.

Pokken Tournament, New Super Mario Bros U, Pikmin 3, Hyrule Warriors, and Donkey Kong Tropical Freeze are all included on that list, and in addition to all being Wii U games, the thing they have in common is the fact that they all cost $60 on the Switch. In most cases, these games didn’t add a significant amount of new content, but often we’d see DLC bundled in with the base game for their Switch releases, if there was any DLC to speak of. 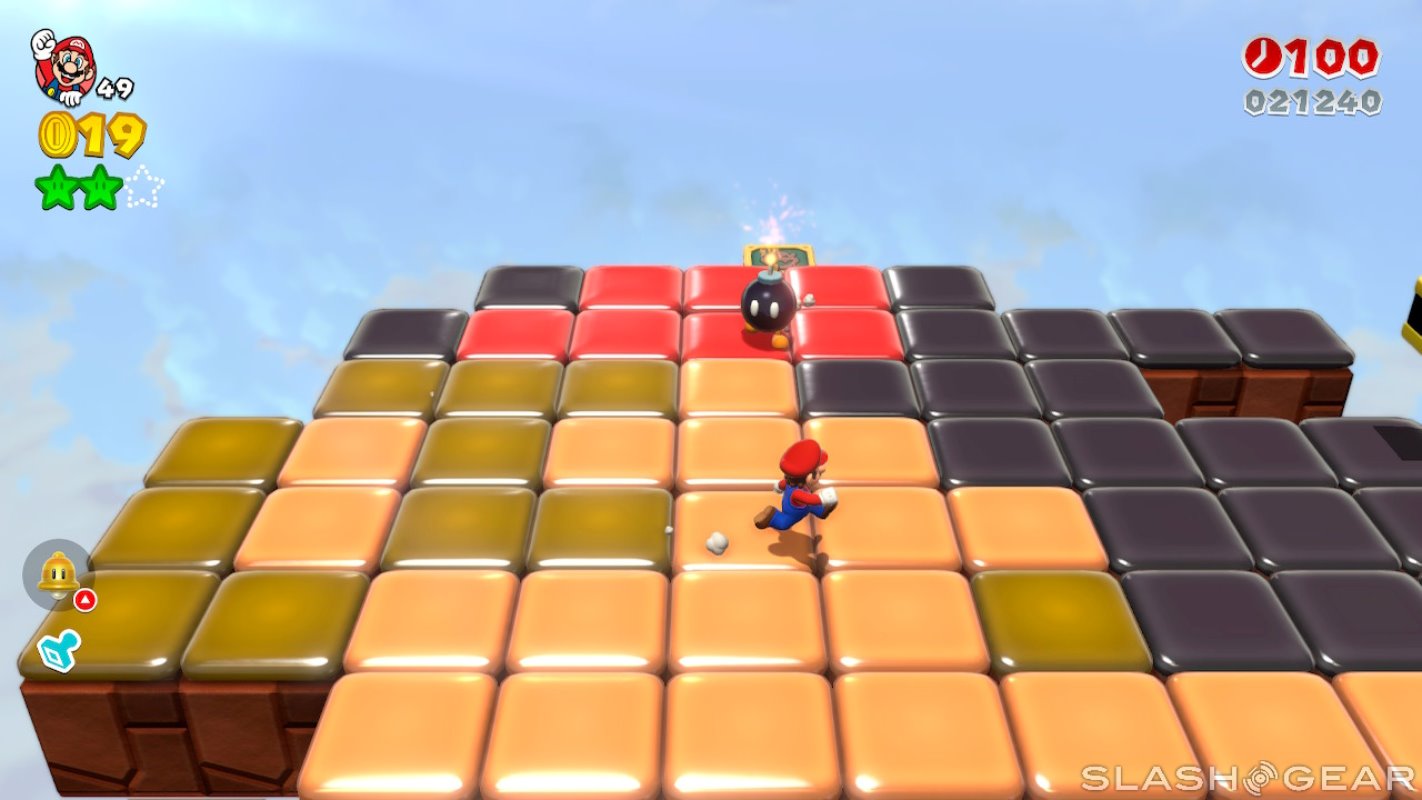 Now we’ve got Super Mario 3D World, which was one of the Wii U’s flagship games. It has arrived on Switch with an entirely new expansion called Bowser’s Fury, and it still unsurprisingly has that $60 price tag. Is it worth it? That ultimately depends on how much you like Mario, and maybe more importantly, whether or not you owned a Wii U.

Even though this new game is titled Super Mario 3D World + Bowser’s Fury, Super Mario 3D World makes up most of the content in this package. To my knowledge, this is more or less a straight port of the game as it appeared on Wii U, save for a few quality of life changes and other tweaks to make up for the fact that there’s no touchscreen or microphone on the Switch controller. 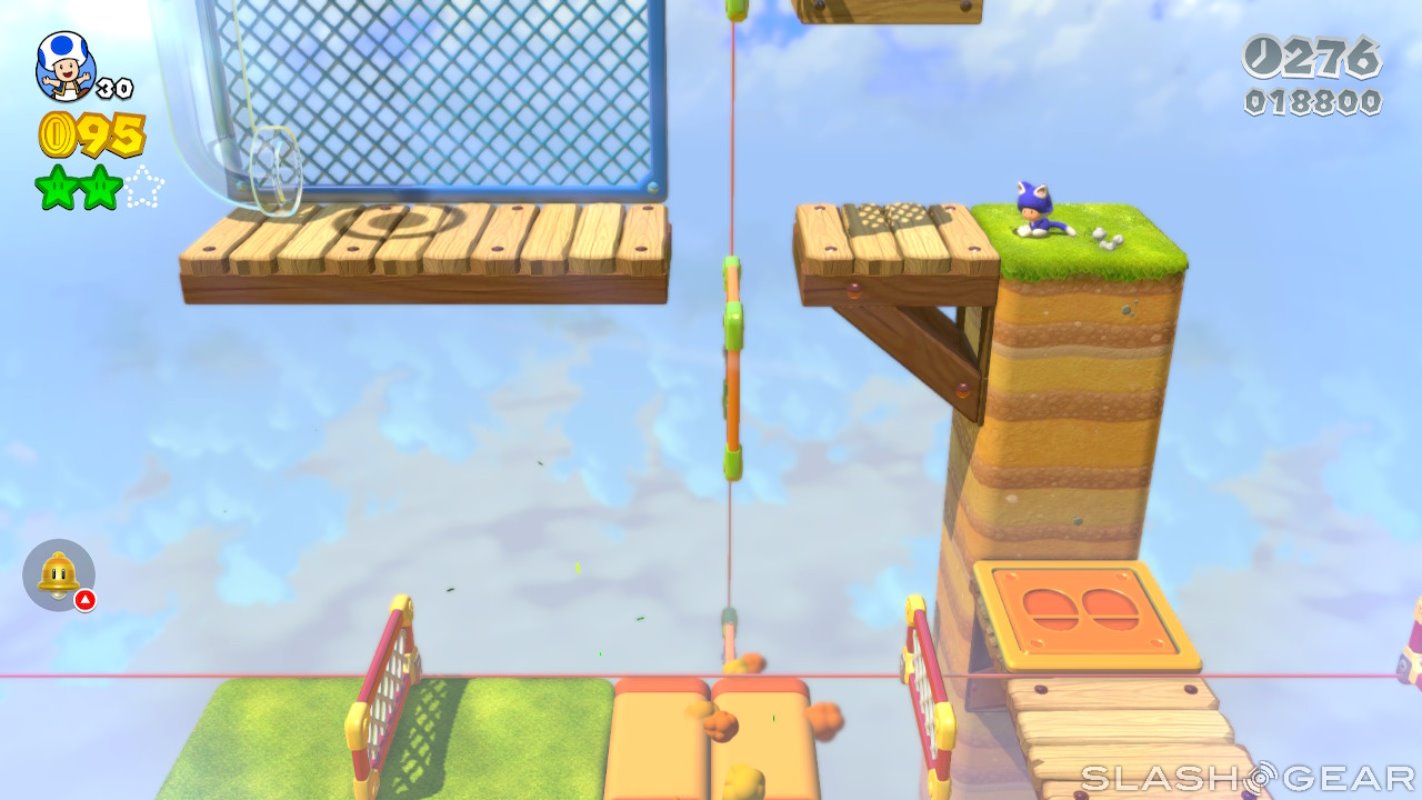 For those who haven’t played Super Mario 3D World before, it’s probably best explained as a cross between traditional 2D Mario games and the newer 3D Mario titles. The game is broken up into worlds and stages just like a 2D Mario game would be, and while some of the stages have side-scrolling elements, many of them are designed in 3D. Super Mario 3D World is the successor to Super Mario 3D Land on the 3DS, which was a very good game in its own right.

Super Mario 3D World can be played solo or multiplayer with up to four players, and when you’re playing the game with three other people, it’s almost always a hectic time. The vast majority of my playtime was spent playing the game solo, and I have to say, I love almost everything about it. 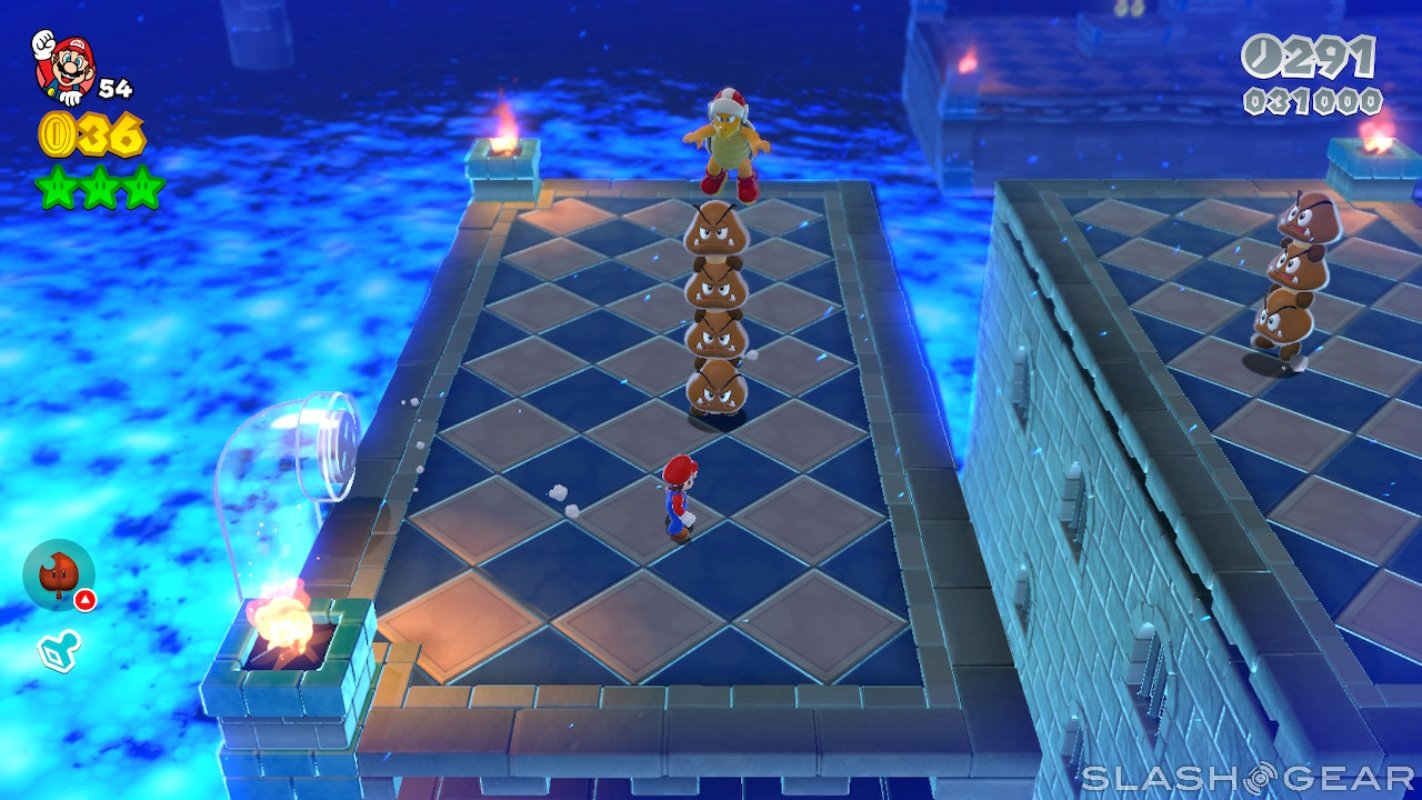 I have a hard time finding any significant flaws with Super Mario 3D World. I think the cat suit – introduced as this game’s signature power-up – is fantastic, as it has you running through stages on all fours, swiping at enemies with your claws, and climbing up walls to discover secrets. You’ll put that cat suit to good use too as there are three green stars and a stamp to find in each level.

If you want to 100% the game, you’ll need to not only find those stars and stamps, but you’ll need to hit the top of the flagpole at the end of each level as well, something that the cat suit makes so much easier as cat Mario (or cat Luigi, cat Peach, or cat Toad) will climb up to the top of the pole – but of course, that requires you to make it to the end of each level with you cat power-up intact. 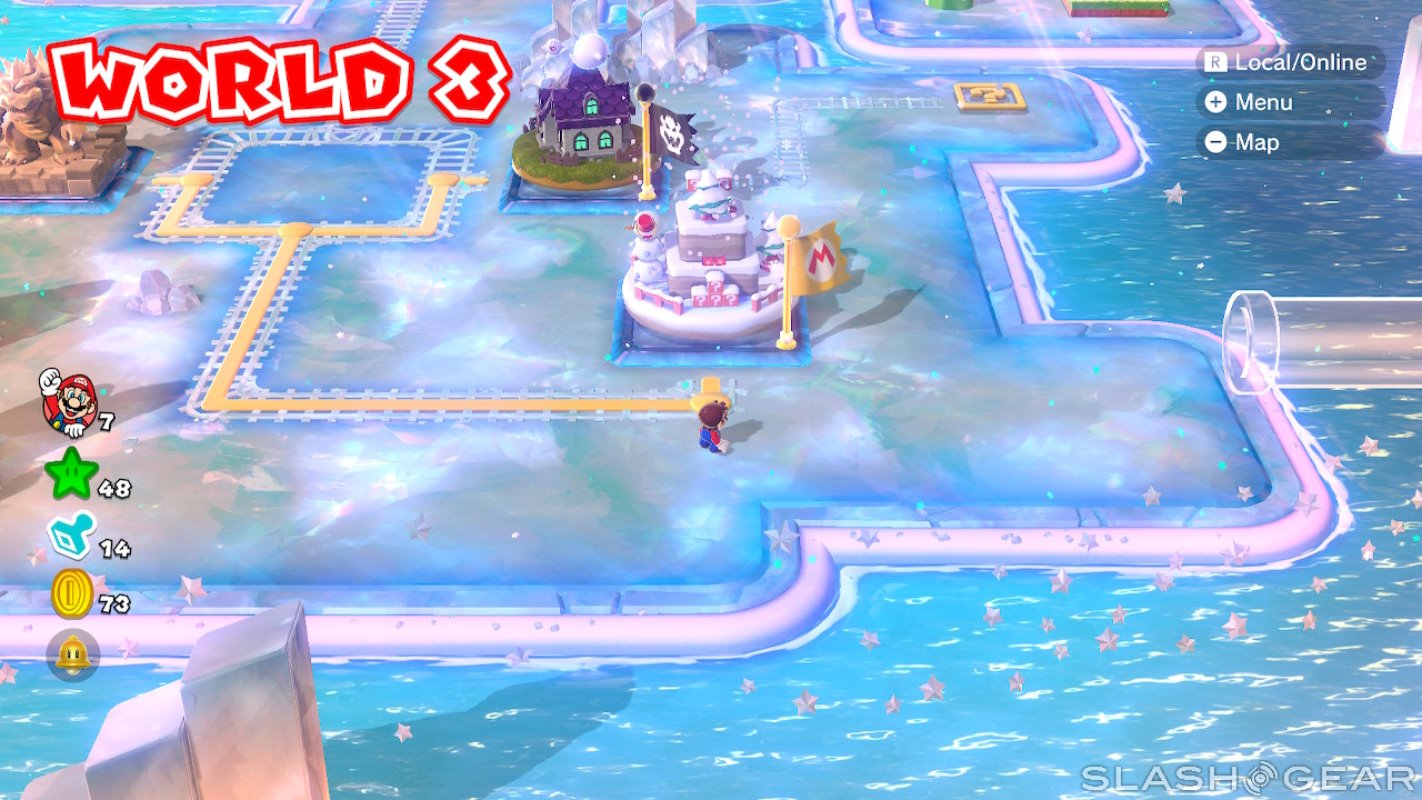 From a level design standpoint, I think Super Mario 3D World is wonderful. The levels are varied, compelling, and boast some of the strongest designs we’ve seen in any Mario game bar none. Any touchscreen segments that were present in the original game have been replaced with gyro controls, and though those take a little while to get the hang of, eventually they won’t be any issue. Gyro segments are few and far between, too, so it’s not like you’ll have to use motion controls all that often – good news for people who loathe motion controls like me.

Super Mario 3D World is a beautiful looking game too. I really enjoy everything about this game, and as someone who didn’t really dig into it back in the days of the Wii U, it’s nice to have this one come forward to the Switch. 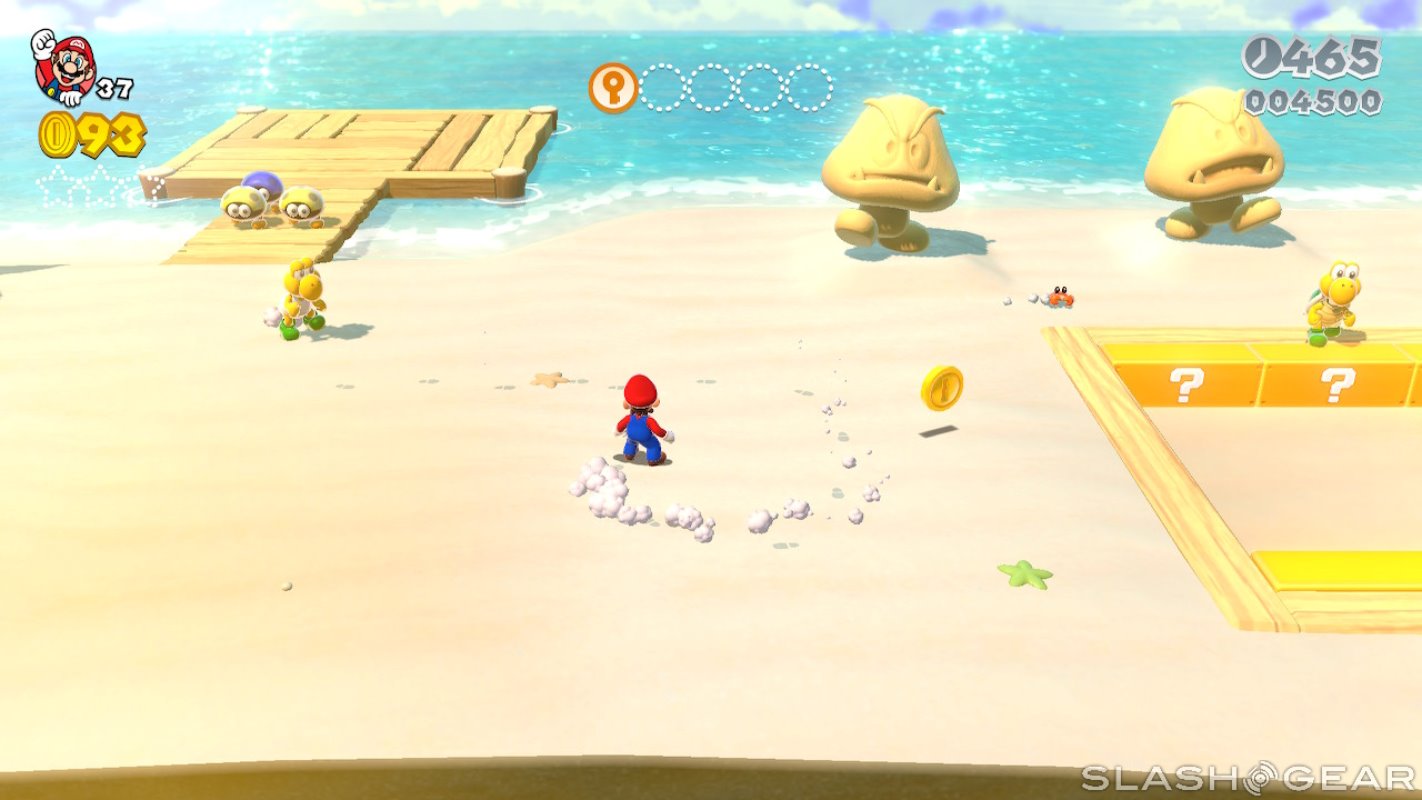 On the whole, I think Super Mario 3D World might be a little easier than some of the other Mario games out there, but there were still plenty of later levels that claimed life after life from me. I also think that the controls in Super Mario 3D World are a little more floaty than I’d usually prefer, but after playing through a few stages, you’ll quickly get used to them.

Beyond those very minor observations, I have no problems whatsoever with Super Mario 3D World. It’s a fantastic game from start to finish, and I intend on going back and collecting the stamps and goalposts I missed to 100% complete this game. If that isn’t a glowing recommendation, I’m not sure what is.

Then we come to Bowser’s Fury, an “expansion” of sorts that feels like it belongs more in Super Mario Odyssey than in Super Mario 3D World. Or, at least, it would feel that way if literally everything in Bowser’s Fury weren’t cat-themed. If you love cat Mario like I do, you’ll probably love playing through Bowser’s Fury, where you get to collect cat tokens as you do battle with cat Goombas, cat Koopas, and cat Piranha Plants. It’s a cat lover’s dream game, in other words. 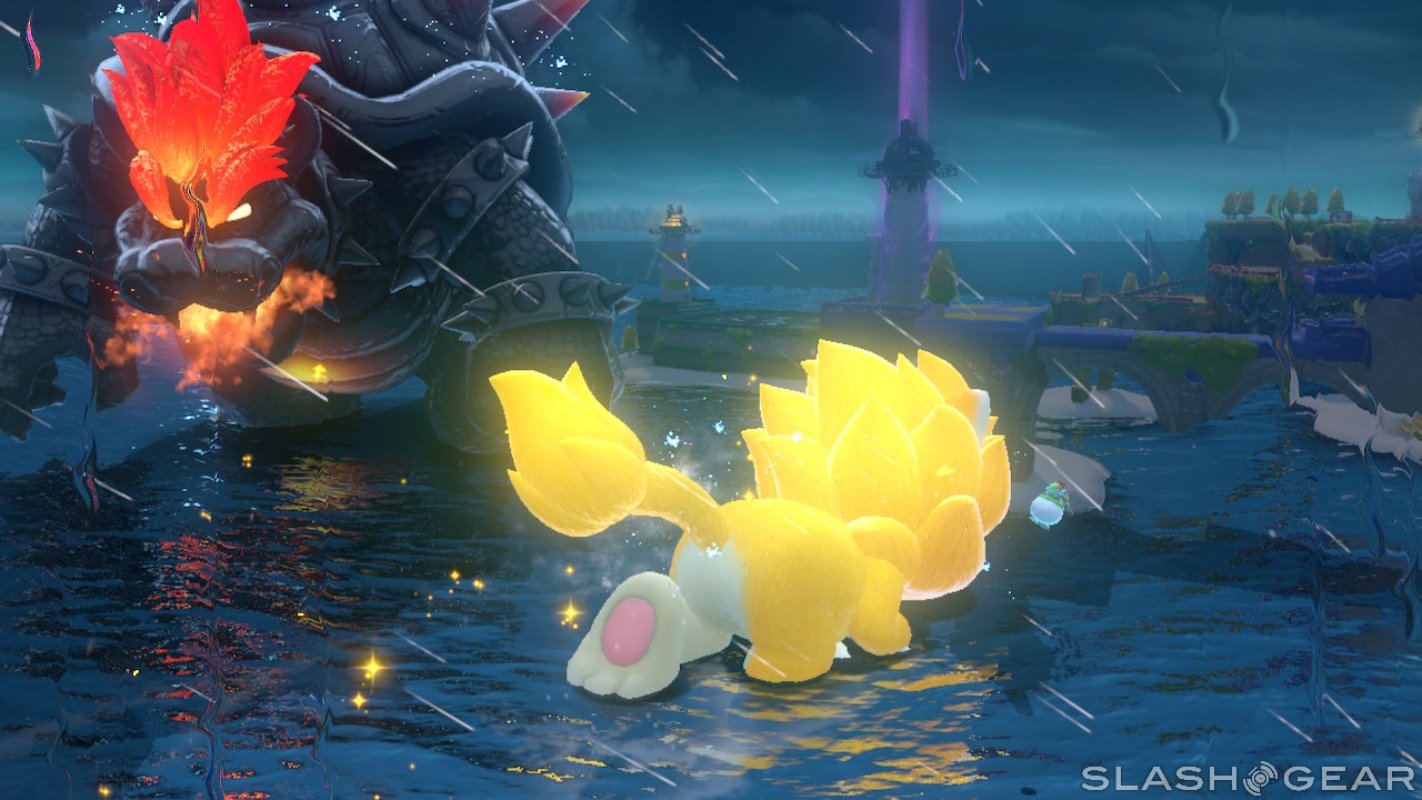 Bowser’s Fury is an open world adventure that will last most players 3-6 hours and actually sees Mario teaming up with Bowser Jr. to stop Bowser, who has become a giant, corrupted, and particularly ruthless version of himself. You’ll progress through different areas of this in-game world as you play, collecting cat tokens and occasionally going one-on-one with Bowser himself, growing to his size through the use of the Giga Bell. Those battles definitely have a Godzilla feel to them, as two titans who dwarf everything else in the world square off.

There are a number of stages to explore in the open world of Bowser’s Fury, and each one has a lighthouse that progressively gets more powerful as you complete challenges and collect cat emblems. You only need to complete a handful of relatively easy challenges to finish Bowser’s Fury, but completionists will find a fair amount of difficulty in each stage’s later challenge. 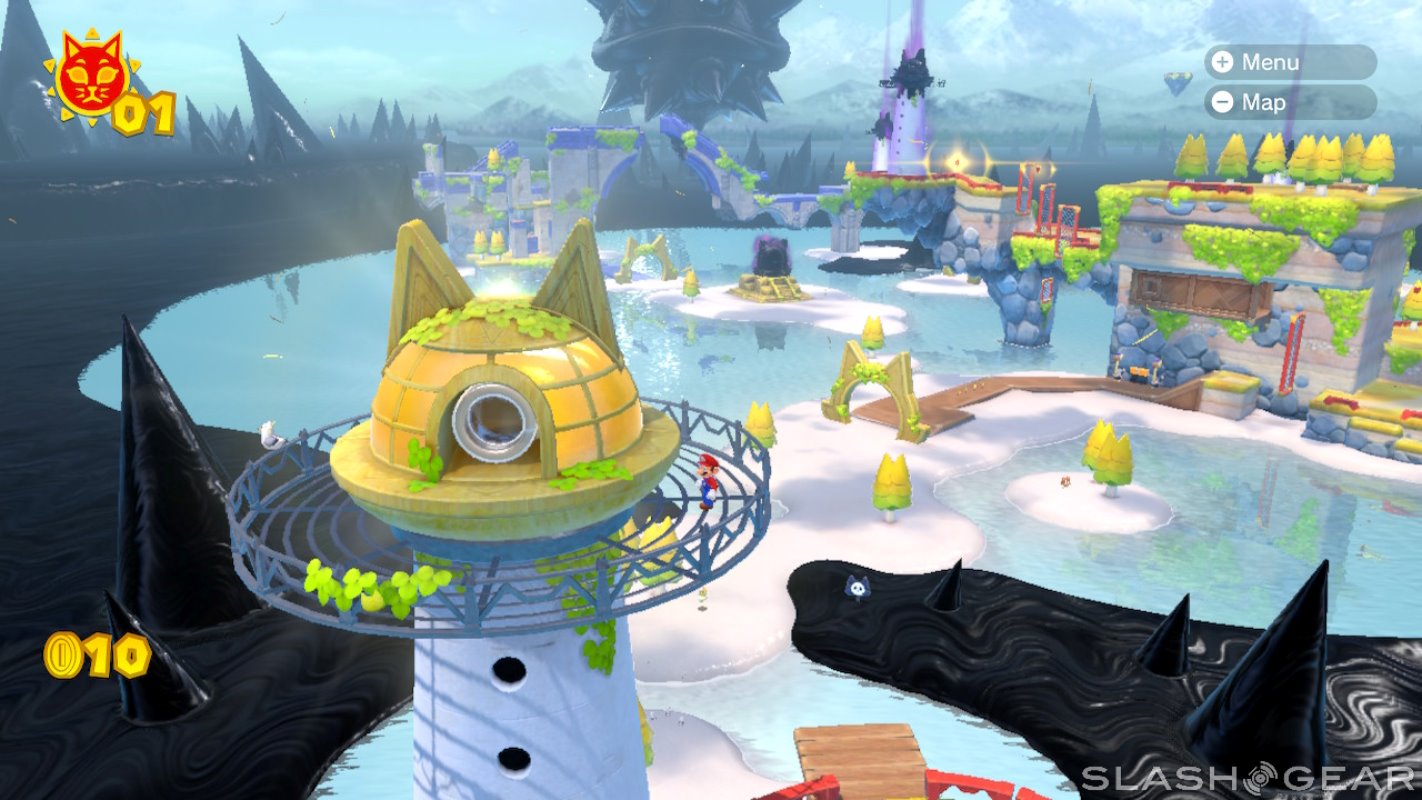 I really enjoyed Bowser’s Fury; I think the stages are fun, the open-world design is fantastic and offers a nice alternative to the structure of Super Mario 3D World, and the challenges you’ll encounter are creative with the right amount of difficulty. The only real issue with Bowser’s Fury is that it’s clear the open world is pushing the Switch to its limit, as even in docked mode, the Switch can’t hit the resolution it achieves in Super Mario 3D World.

Really, my major gripe with this game comes down to price. If I’ve said it once, I’ve said it a thousand times: the Wii U ports need to be priced at $40, not $60. I understand that Nintendo, more than any other company out there, tends to overvalue its IP, and here it can also claim that it’s basically a new experience to the many of us who never owned a Wii U. That doesn’t change the fact that Super Mario 3D World is turning 8 years old in 2021 – paying $60 for an eight year old game is outrageous whether you played it the first time around or not. 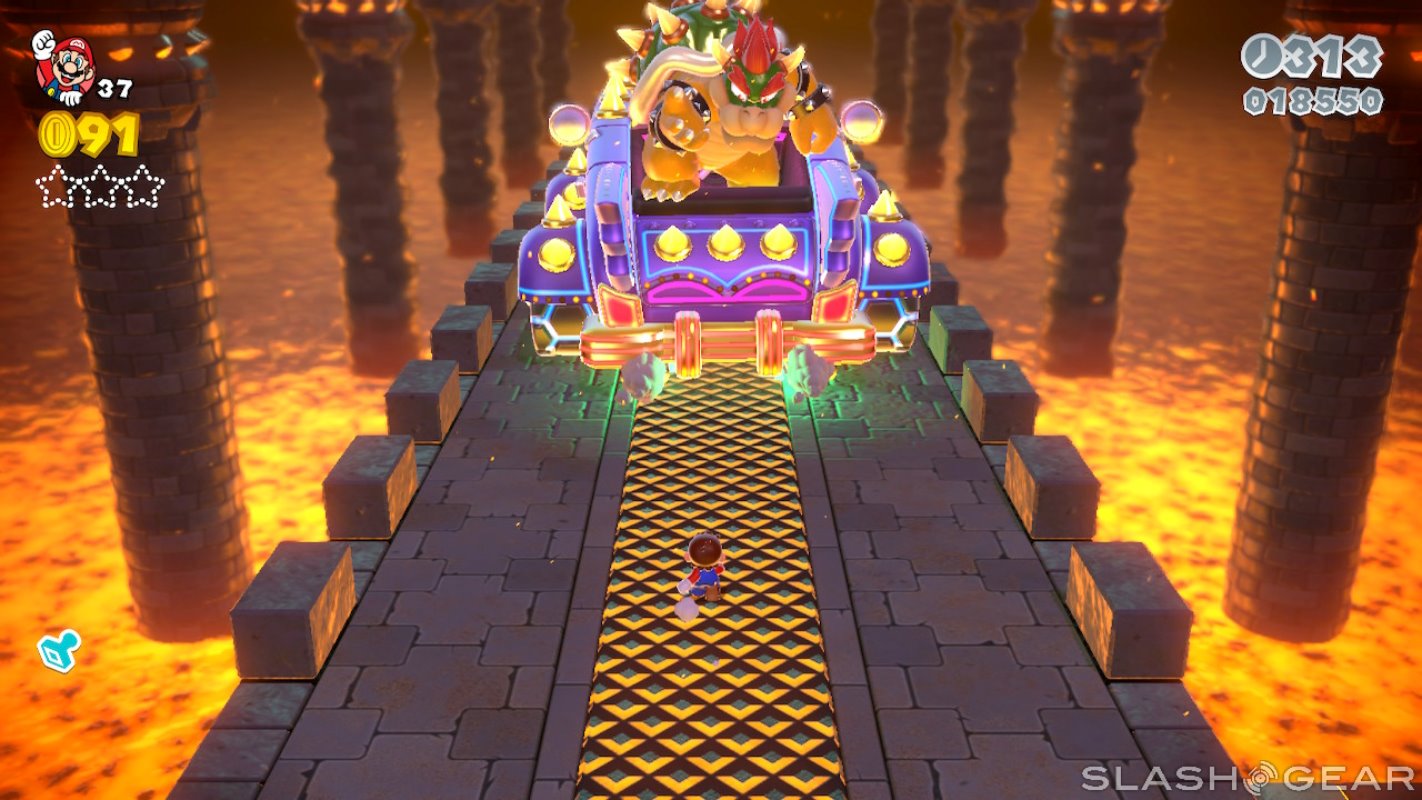 Bowser’s Fury, as fun as it is, is a relatively short expansion too, and it doesn’t make this pricing acceptable. It’s nice that we’re getting some kind of bonus content considering that most of the Wii U ports don’t typically offer anything new outside of previously-released DLC, but I would have really liked to see this package priced at $40. This is my one consistent criticism of these Wii U ports, and I will keep complaining about it as long as Nintendo keeps pricing them at $60 (though, at this point, it’s running out of games to port over from the Wii U).

I feel like I’m shouting at a brick wall here, because some of these Wii U ports have turned into major hits on the Switch. At this point, all Nintendo needs to do is look at the success of Mario Kart 8 Deluxe for reason to keep pricing these games at $60. Let’s not kid ourselves here: no matter how much I complain about it, Nintendo isn’t going to stop charging so much for these games, which is a disappointing realization to come to. 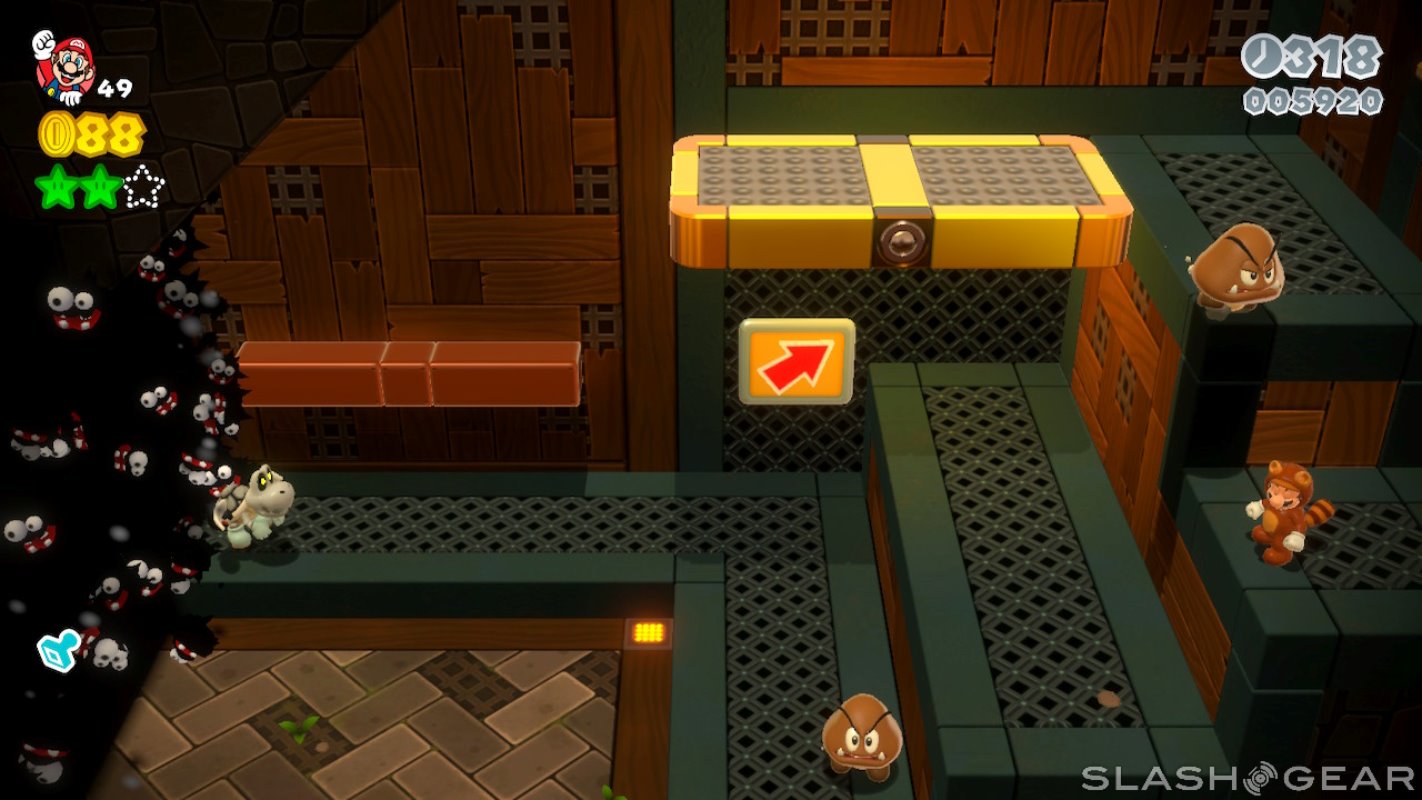 It isn’t as if this is a bad game, either. In fact it’s quite the opposite, and I think if Mario fans can handle the price tag – a bitter pill though it may be – most of them will love Super Mario 3D World + Bowser’s Fury. I don’t often get the drive to chase 100% completion in the games I play, but I will definitely be returning to Super Mario 3D World to see what secrets await when I collect all of the stamps and gold goalposts (I already made a point of collecting all the green stars I could on my initial playthrough).

Bowser’s Fury is just icing on the cake considering how fantastic Super Mario 3D World is, but more than anything, it makes me wish we had a follow-up to Super Mario Odyssey coming down the pipeline. Still, there’s no denying that this is a fantastic package where the only real sticking point is the price, so even though it hurts a little to say it, it deserves a spot in every Switch library even if it costs more than it should to put it on your shelf.