Sugar is increasingly recognized for causing damage to your health when consumed in excess and it’s becoming common knowledge that the substance can be addictive. Along with contributing toward obesity, diabetes and chronic inflammation, the research of one doctor and his team at Weill Cornell Medicine suggests that sugar may also fuel the growth of various types of cancer.

Dr. Lewis Cantley has spent decades questioning the role that sugar plays in human diseases and mounting evidence suggests that the enzyme phosphoinositide-3-kinase (PI3K) is a key pathway for aiding the development of cancer cells. Eating sugar increases blood glucose levels and the body’s pancreas responds by producing insulin. PI3K is activated by insulin and the body use this enzyme for up-taking glucose into cells.

More specifically, PI3K produces a lipid known as PIP3 which helps insulin move glucose into the muscles and liver. Typically, this process promotes the growth and survival of healthy cells but excess sugar consumption can disrupt normal operations and result in health complications.

For example, in the case of type II diabetes, insulin resistance causes the PI3K pathway to function more slowly than it should and cells don’t receive enough glucose. The opposite is true when it comes to cancer: the PI3K pathway supplies tumors with glucose instead of your healthy cells and thus allows tumors to flourish.

It’s thought that a malfunction in this process may contribute toward as much as 80% of cancers and Dr. Cantley says that 50% of Americans are insulin-resistant but most don’t have type II diabetes because their pancreas creates enough insulin to keep glucose levels in check.

Insulin resistance can progress into type 2 diabetes, but even if it doesn’t, if a tiny tumor is growing in the body and it develops a genetic mutation in the PI3K pathway, it will respond to the high serum insulin, activate PI3K and drive glucose into the tumor, not muscle. We have known that tumor cells take up glucose at a higher rate than healthy tissue for nearly 100 years and use this observation to visualize tumors by a technique called fluorodeoxyglucose positron emission tomography (FDG-PET). Now we know why.

Dr. Cantely has questioned whether the insulin spikes from excess sugar consumption may counter the effects of common cancer treatments by reactivating the PI3K pathway in cancer cells. He suggests that diets low in carbohydrates may help cancer patients overcome the disease by starving cancer cells, and this hypothesis was tested using a PI3K inhibitor on mice that were genetically engineered to have various types of cancer.

Results from this testing were published in 2018 and revealed that causing insulin spikes in the mice can indeed reactivate the PI3K pathway in tumors, despite the mice being treated with a PI3K inhibitor. The research also found that putting the mice on a low-carbohydrate diet along with the inhibitor caused their tumors to shrink. It was noted that dietary changes in conjunction with the medication resulted in greater effects than the inhibitor alone. 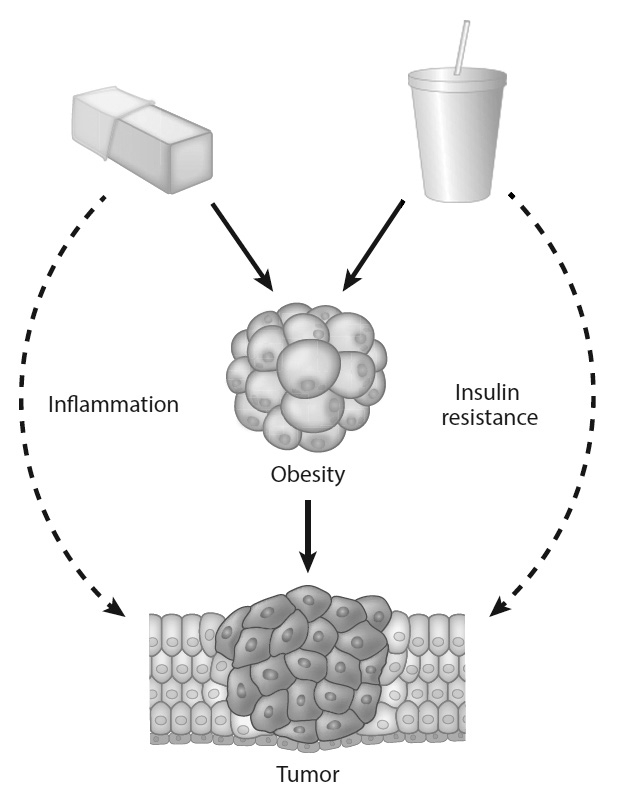 Targeting the PI3K pathway may be a go-to method for fighting cancer in the future and one such drug – “idelalisib” (PDF) – has already been approved by the FDA in 2014 for treating lymphoma and leukemia. Using PI3K inhibitors for treating cancer isn’t always so straightforward though, and it’s noted that sometimes drugs which block the enzyme can cause spikes in blood sugar. Instead of starving tumors, the PI3K inhibitors sometimes cause the liver to dump glucose (glycogen) into a patient’s blood, triggering excess insulin and the growth of tumors.

Nevertheless, considering the current findings, it stands to reason that sugar ought to be consumed in moderation, regardless of the role that PI3K inhibitors might play in future cancer treatments. Statistics from the World Health Organization suggest that the average American eats 126 grams of sugar per day, or nearly four times the recommended amount.

The mutations to the PI3K pathway that cause cancer also enhance the ability of insulin to activate the enzyme,” Dr. Cantley explains. “Our preclinical research suggests that if somewhere in your body you have one of these PI3K mutations and you eat a lot of rapid-release carbohydrates, every time your insulin goes up, it will drive the growth of a tumor. The evidence really suggests that if you have cancer, the sugar you’re eating may be making it grow faster.